At Bayut.com, the UAE’s leading property portal, we have unique access to real estate listings, consumer behaviour and property prices in Dubai – allowing us to gather and infer data to help users make accurate, well-informed decisions.

From the 94,000 listings on Bayut.com from November 2016 to November 2017, we can report that Dubai property posted a stable return on investments (ROI), despite the fact that rent and sales prices have dipped across most property types.

The average annual rent in dubai went down 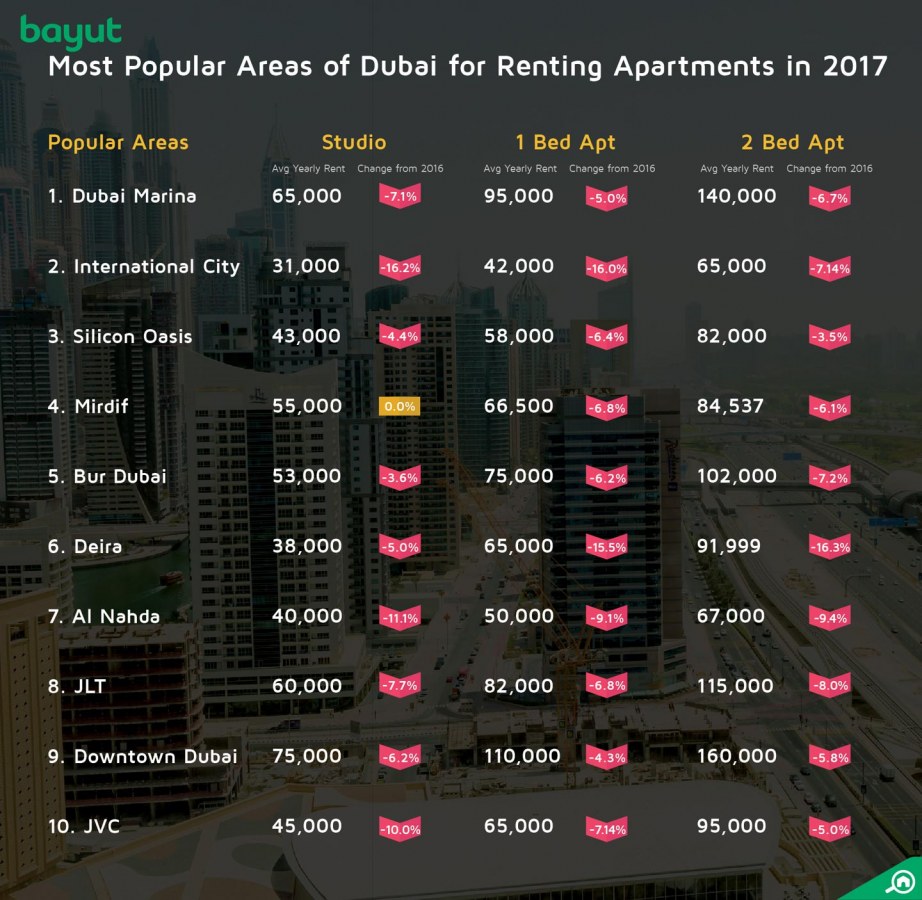 In 2017, Dubai Marina was the most popular neighbourhood for apartments to rent in Dubai, with Dubai International City, Dubai Silicon Oasis, Mirdif and Bur Dubai, following suit. Rounding off the top 10 list of most sought-after areas by search volume were Deira, Al Nahda, JLT, Downtown Dubai and JVC. 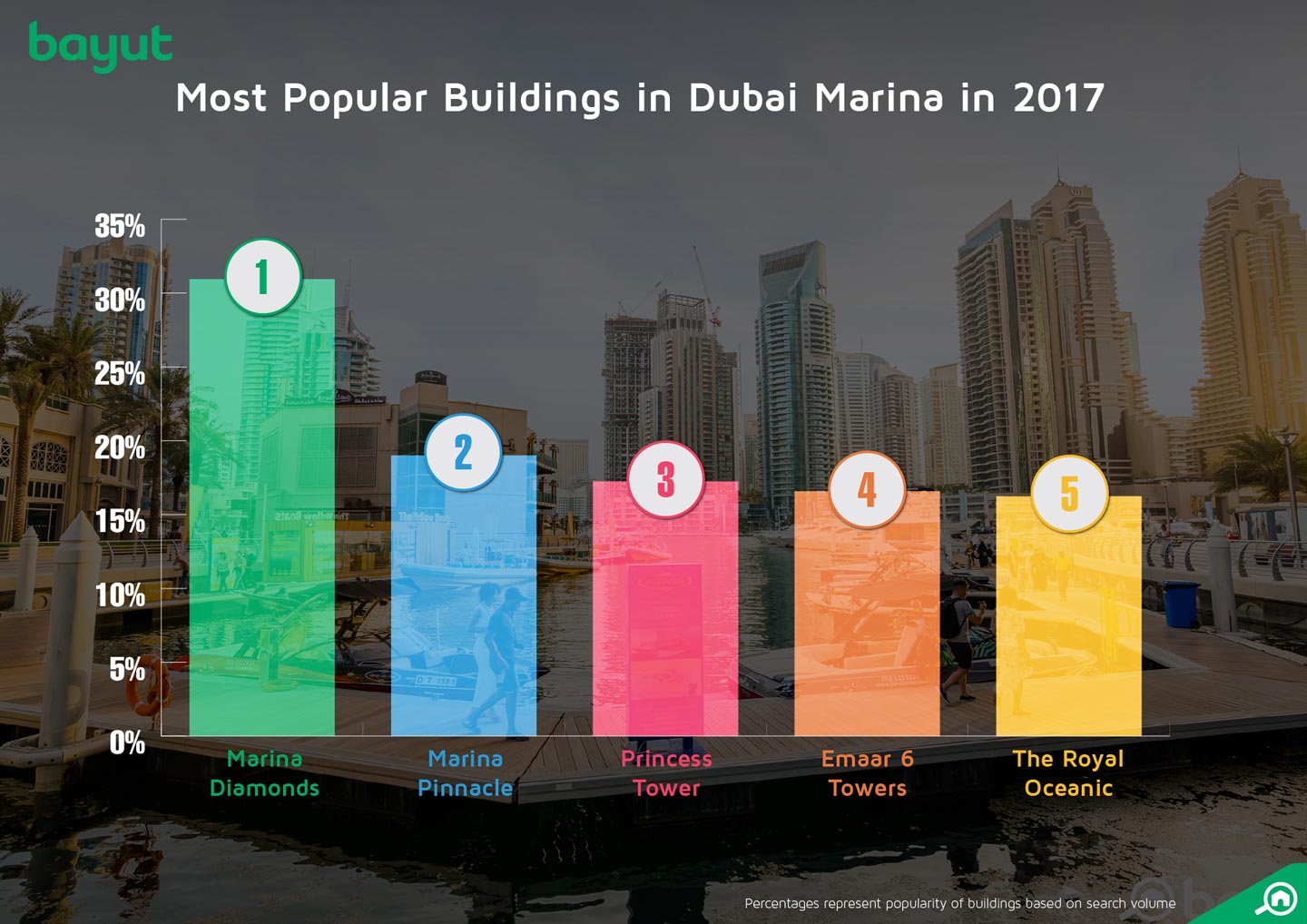 In the Marina area itself, the sub-community that received the highest percentage (30%) of all end-user interest in the area was Marina Diamonds. The famous collection of seven buildings on the Marina Waterfront was followed by Marina Pinnacle, Princess Tower, Emaar 6 Towers and The Royal Oceanic, in that order.

The average annual rents of apartments have declined in 2017, with the biggest drop being seen in Dubai International City (16%). This has resulted in the tenants paying AED 31K, AED 42K and AED 65K for a studio, one and two-bed flats, respectively, per annum. While it is the most expensive of the popular areas, Downtown Dubai also saw rents drop by between 4% to 6% compared to 2016, with studios, one and two bedroom apartments renting out for AED 75K, AED 110K and AED 160K, respectively. Interestingly, the only area to not have any fluctuation in their asking rent were the studio properties in Mirdif. 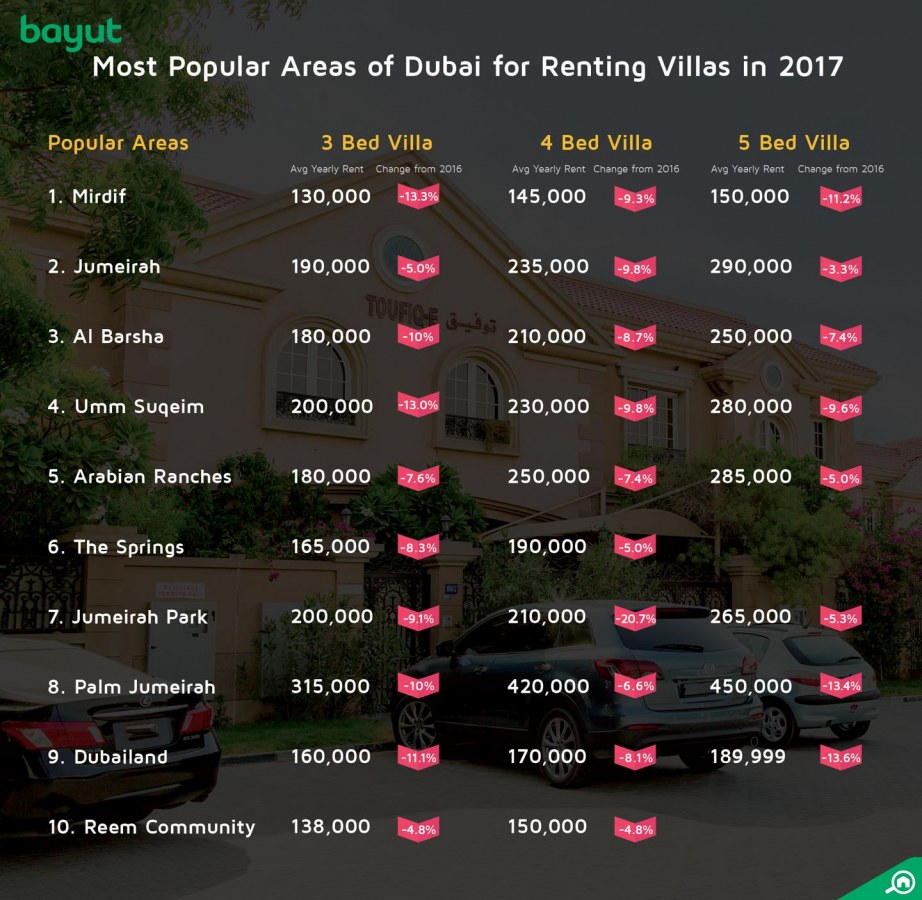 When it comes to villas for rent in Dubai, townhouses and villas in Mirdif have attracted the most interest from Bayut.com’s users – while the rest of the top 10 list included the usual suspects such as Jumeirah, Al Barsha, Umm Suqeim, Arabian Ranches, The Springs and Palm Jumeirah. Relatively newer projects such as Jumeirah Park, Dubailand and Reem Community round off the list. 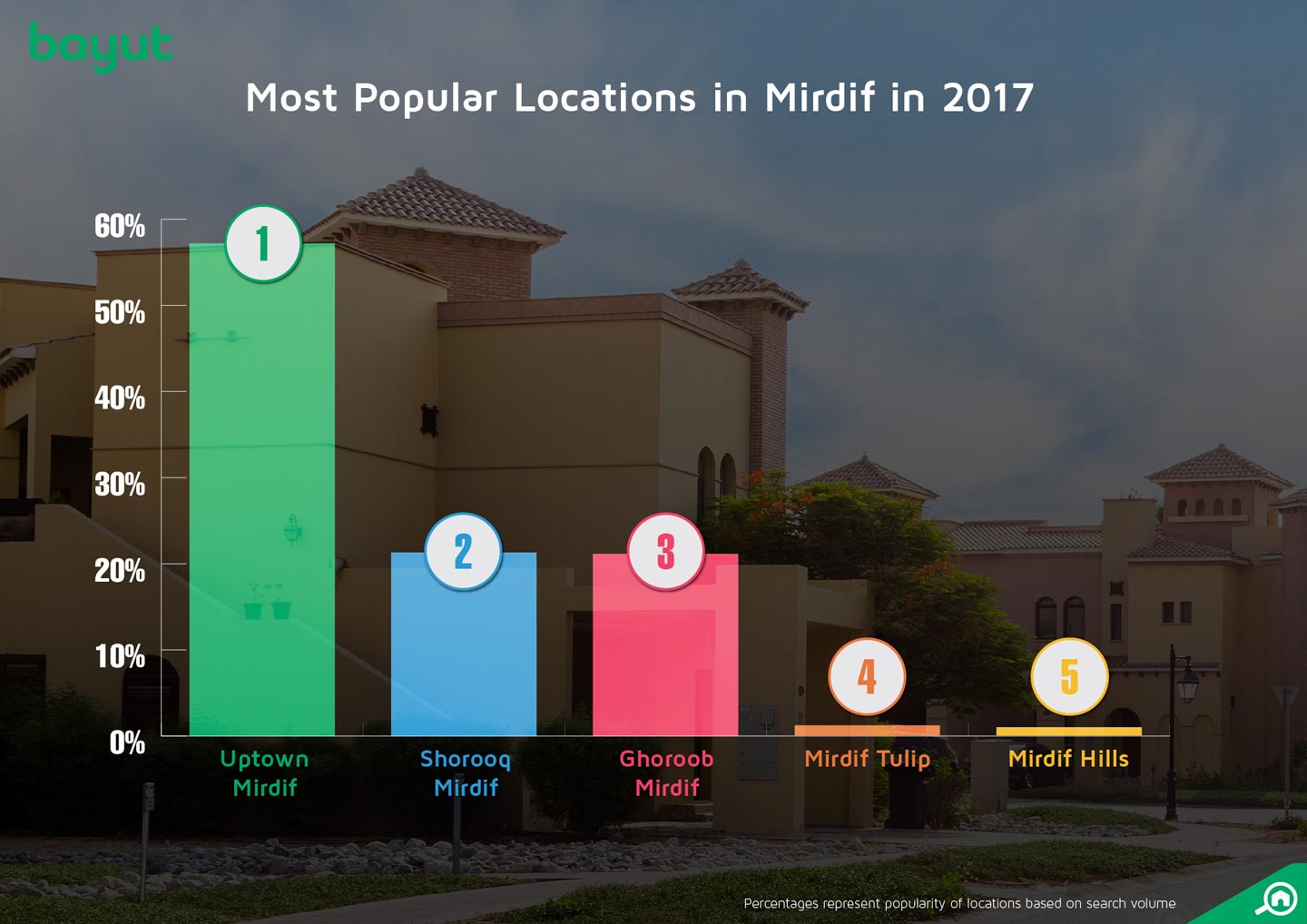 Villas in Uptown Mirdif took the lion’s share (60%) of all end-user interest in Mirdif his year due to the Uptown Mirdiff Mall in the heart of it. Other developments of Mirdif with plenty enquiries include Shurooq and Ghoroob, followed by Mirdif Tulip and Mirdif Hills.

While it was the most popular, Mirdif is also the most wallet-friendly villa locale with annual rents averaging at AED 130K, 145K and 150K for three, four, and five bedrooms, respectively (dropping 9% to 13% from their price in 2016). Palm Jumeirah proved to be the most expensive of 2017’s popular areas, with tenants shelling out between AED 315K and AED 450K for three to five bedroom properties, although this is still 6% to 13% lower than the same period in 2016. 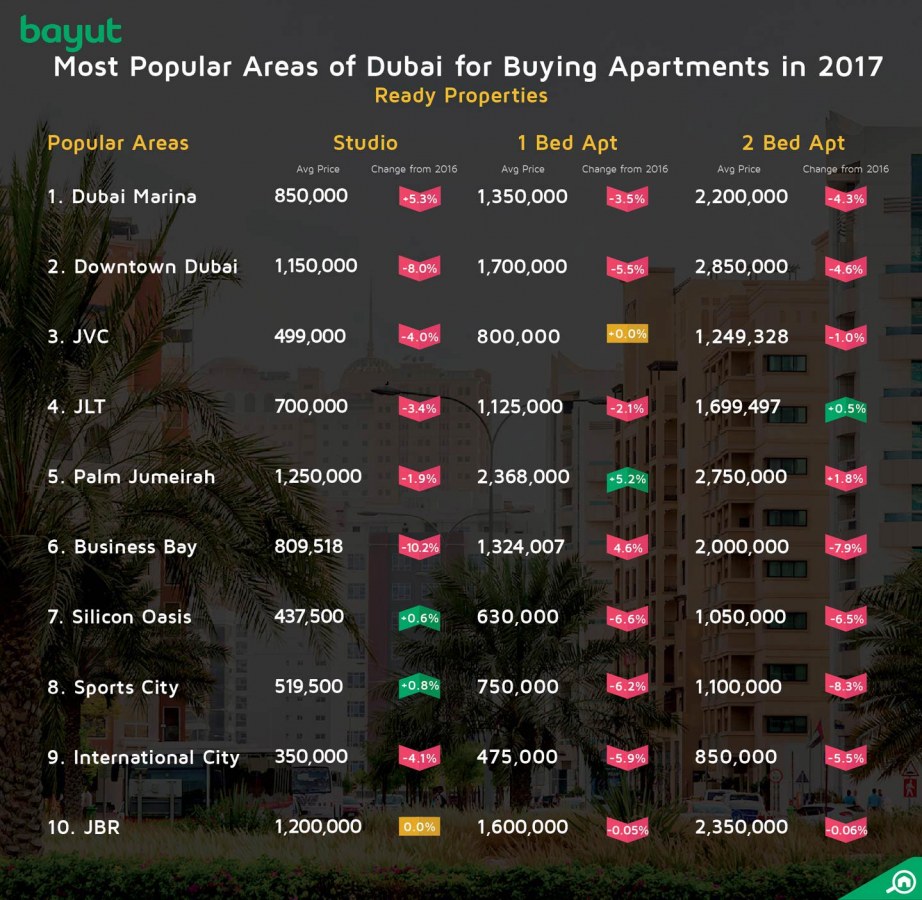 Investors interested in buying apartments in Dubai this year were most attracted by Dubai Marina, followed by Downtown Dubai, JVC, JLT and Palm Jumeirah. Some of the other areas that also racked up searches were Business Bay, Dubai Silicon Oasis, Dubai Sports City, Dubai International City and JBR. 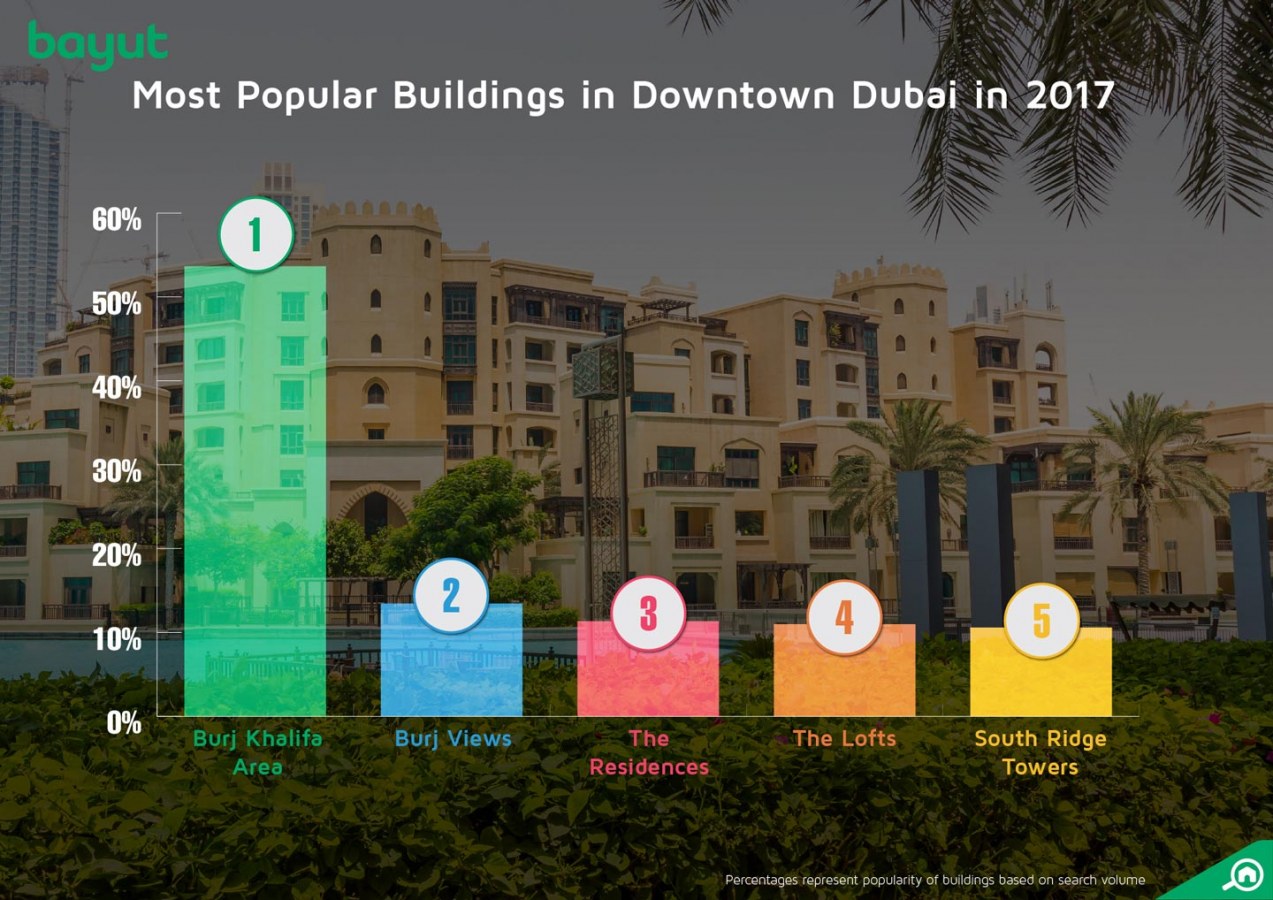 Since we’ve already unveiled the most the most popular buildings in the number one most desirable area this year, Dubai Marina, let’s examine the popular areas of Downtown Dubai, the second most popular area for buying apartments. The one and only Burj Khalifa received a whopping 55% of all inquiries on Downtown Dubai listings, followed by Burj Views, The Residences, The Lofts and South Ridge Towers, in that order.

Of the popular areas for buying apartments in 2017, investors and homebuyers found that the asking price in Dubai International City dropped by 5%, and had the cheapest options of AED 350K, AED 475K and AED 850K for studio, one and two bedroom units. Similar to 2016, Palm Jumeirah was the most wallet-lightening of popular neighbourhoods. However, investors in this area still saw the average sales price drop, to AED 1.25M and 2.7M for studio and two bedroom flats in 2017 – only one bedroom units increased by 5% to AED 2.4M.

The only other property types that saw an upswing studio units in Dubai Sports City and Dubai Silicon Oasis (1%) while prices of two bedroom flats in JLT rose by 0.5%.

When it comes to purchasing villas, Arabian Ranches was the most searched-for community, while Reem Community, Dubailand, Palm Jumeirah and The Springs were also popular. However, other villas neighbourhoods such as The Meadows, Jumeirah Park, The Villa and Jumeirah Golf Estate also featured on the most popular list. 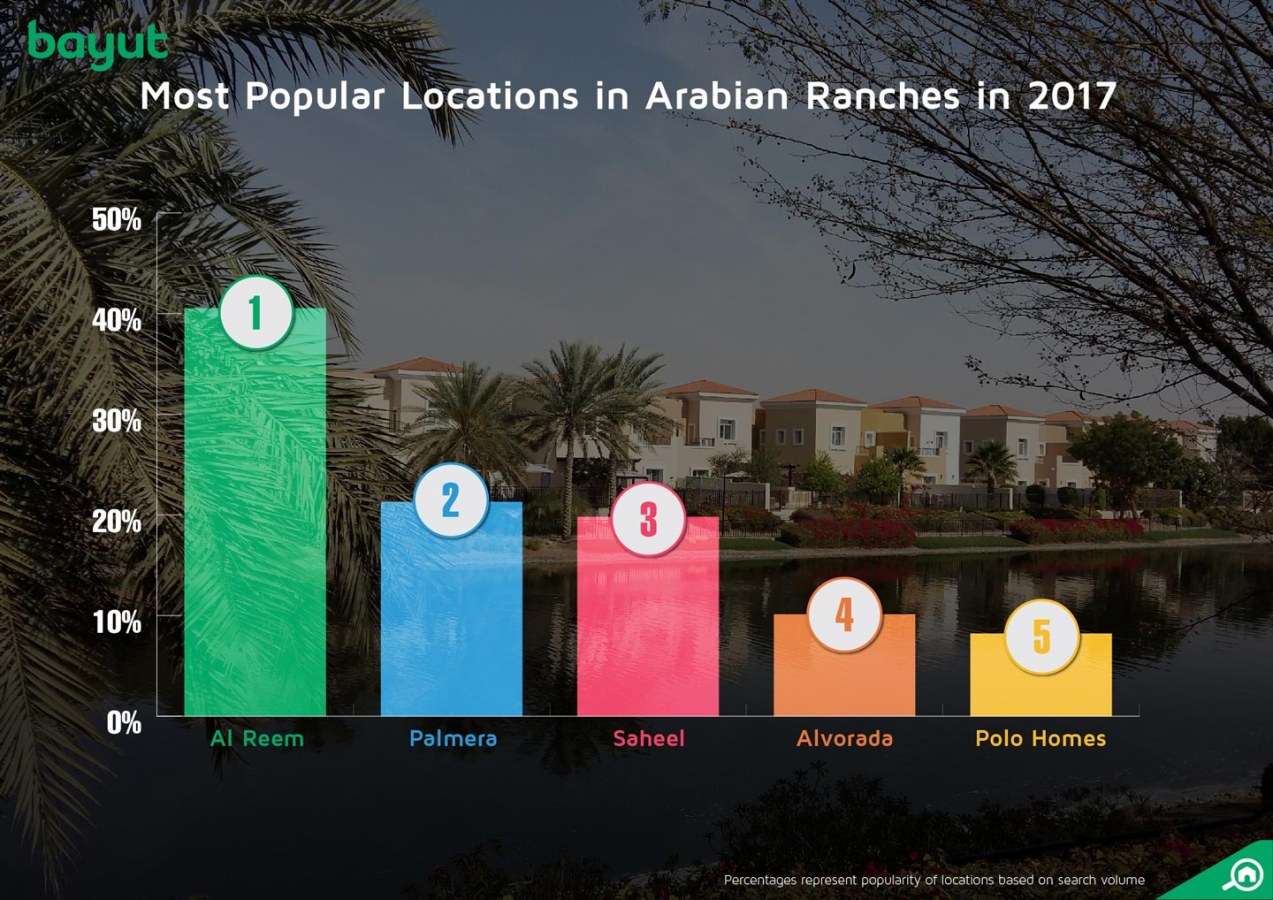 In Arabian Ranches, the luxurious Al Reem villas with lakefront views received the bulk (40%) of the total end-user interest in the area. Palmera and Saheel followed suit with 20% of total enquiries, while Alvorada and Polo Homes took the 4th and 5th spot, respectively.

According to our data, while asking prices either fell or remained stable, only villas in Reem Community saw villas being listed for 10% more than in 2016. However, our research revealed that this is instigated by the fact that Reem was largely an off-plan community in 2016 and as more properties have been completed and handed over, the desirability of the area has shot up.

For bargain-hunting investors and home buyers, three bedroom villas in Dubailand cost a competitive AED 1.6M (the same as in 2016); while four and five bedroom units were listed at AED 2.8M and 3.6M, respectively. While one of the most popular locales, Palm Jumeirah proved to have the most expensive villas, with five bedroom villas averaging at AED 15.5M in 2017.

Of all the listings for off-plan property in 2017, 86% were for projects in Dubai – with Dubai Marina based developments being the most popular. Other areas that racked up interest were Downtown Dubai in second place, followed by JVC, JLT and Dubai Silicon Oasis.

Within the Dubai Marina itself, Marina Gate 1 attracted almost 70% of the total searched while Emaar’s Vida Residence was the most popular in Downtown Dubai. Over in JLT, users were most interested in Wind Tower I and Wind Tower II. JVC’s Bloom Towers and Green Valley Tower both tied for first place in terms of popularity while Binghatti Stars in Silicon Oasis attracted the most interest for an off-plan project.

The CEO & Head of Architecture at Binghatti Developers, Muhammad BinGhatti said: “We have seen an overwhelming response to our apartments, a positive sign that the market is still robust with plenty of demand for high quality yet affordable properties.”

On the forecast for 2018, CEO of Bayut.com, Haider Ali Khan, said: “At Bayut.com, our goal is to place extensive data-based reports and area guides at the fore of all UAE house hunting intelligence to help renters and investors alike make sound real estate decisions.”

Khan goes on to say: “As more and more off-plan projects are completed in 2018, handed over and put on the secondary market, we can expect prices continuing to attract investors while landlords will have to stay competitive to entice potential tenants. In the long run, as the market and the broader economy move on a trajectory of diversification and maturity, the opportunity for developers and sellers to capitalise on their investment remains strong.”

To see how the market has fared as of the last quarters, please read Bayut.com’s previous market report on trends and property prices in Dubai.

Disclaimer: The above report is based on prices advertised by real estate agencies on behalf of their clients on Bayut.com, and are not representative of actual real estate transactions conducted in Dubai.

Things to do in Al Bahar Abu Dhabi Corniche

5 Apps to make your life at home easier

All about IKEA Jebel Ali in Dubai