The city of Dubai is known for doing things bigger and better than anywhere else in the world. Ain Dubai is no different – something an Ain Dubai vs London Eye comparison will prove in no time.

Set to be the biggest Ferris wheel in the world, Ain Dubai has attracted the attention of tourists and observers from across the globe even before its official launch. Often compared to its counterpart in London – the London Eye, Ain Dubai already has people talking about all the ways it brings exclusivity to Dubai. This Ferris wheel comparison has all you need to know about these two landmarks. 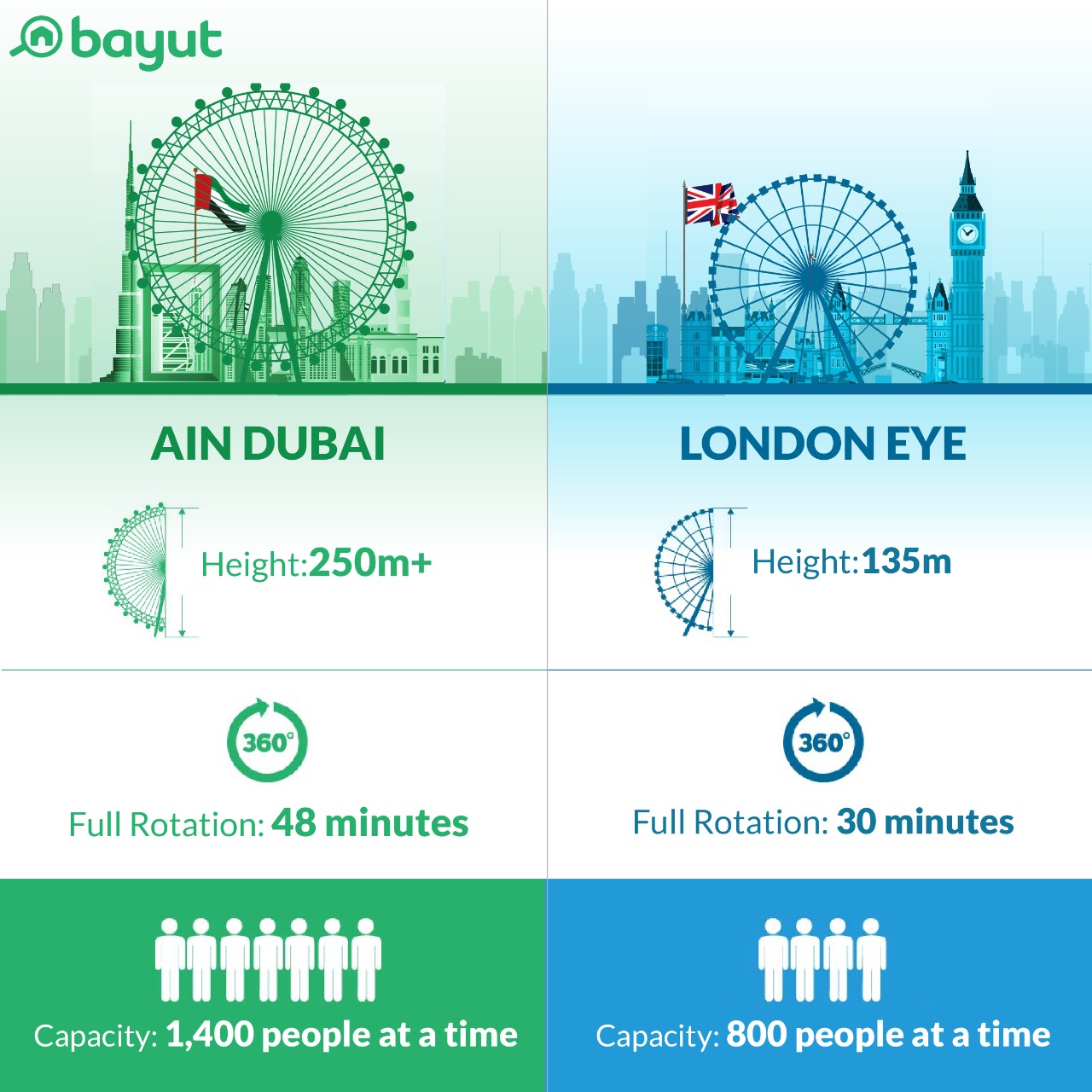 What’s in the Name?

A post on Ain Dubai vs London Eye makes it obvious that Ain Dubai is an observatory Ferris wheel just like its counterpart. These two structures might be similar, yet different but they have one thing in common – they were not always called what they’re known as today.

The London Eye was launched on New Year’s Eve in 1999 as the Millennium Wheel. In 2015 however, the name was changed to Coca-Cola London Eye – when Coca-Cola took over EDF Energy as the official sponsor for this landmark.

Inspired by the London Eye, Ain Dubai was initially named Dubai-I. However, the name was later changed to incorporate the word “Ain” which means “eye” in the local language. The step was taken as an ode to the Arabic heritage of the UAE.

Now, before we dig into the popular Ain Dubai vs London Eye comparison, it’ll be interesting to take a peek into how these mega structures came to be and the significance they hold.

Whether it’s Ain Dubai or London Eye, they both have a little background story to them.

There were seven architects who worked on the London Eye design. Nic Bailey, Frank Anatole, Steve Chilton, Mark Sparrowhawk, Malcolm Cook, David Marks and Julia Barfield took inspiration from the bicycle wheel to come up with the design.

According to the London Eye history, the landmark was planned as a temporary attraction on a 5-year lease. Its been almost 2 decades now, and the place is just as popular.

Ain Dubai was designed by Snohetta – an ace architecture company based in Norway. The construction began in 2015. The edifice is still in progress, and the new Ain Dubai opening date will be in line with the launch of EXPO 2020.

The construction of Ain Dubai used 9,000 tonnes of steel, which is 25 percent higher than the amount of iron used in constructing The Eiffel Tower. Ain Dubai is held together using spoke cables that would cover the 2,400 km distance between Dubai and Cairo if laid end-to-end. If we just talk about the colossal wheel rim of Ain Dubai – it weighs as much as the combined weight of sixteen Airbus A380s!

It is no secret that after its completion, Ain Dubai will be the biggest Ferris wheel in the world. Currently, it’s the High Roller in Las Vegas that holds this title standing 167 metres tall. But where does the London Eye stand?

Let’s continue with the numbers in our London Eye vs Ain Dubai comparison.

How Tall are They?

Almost completed, Ain Dubai is massive – over 250 metres in height! Once aboard, people can witness the city of Dubai with 360-degree views of all the vistas – the Dubai coastline being the most prominent one.

The London Eye stands 135 metres tall. The Ferris wheel offers panoramic views of the gorgeous London city. Once on the London Eye, you can see as far as 25 km into the distance, covering the expanse of the city and beyond that. On a clear day, the London Eye view goes as far as Windsor Castle, which is 40 km away from the London Eye.

To understand all that these two observatory Ferris wheels offer, it is important to first get an insight into their individual locations.

Located in the London Borough of Lambeth, the London Eye stands on the bank of River Thames. The area, known as South Bank, is popular for being the cultural heart of London. London Eye is a proud member of perhaps the most renowned landmarks cluster in London, including the Big Ben, Westminster Abbey, the Shard and the Houses of Parliament.

While the London Eye enjoys a warm setting in the middle of the city, alongside other famous tourist spots in the city, the Ain Dubai location story is slightly different.

Ain Dubai has been erected as the central attraction of the Bluewaters Island. This man-made island in Dubai is developed by Meeras as a retail and recreational hub with designated residential and hospitality areas. Bluewaters Island is an AED 6B project located across the Jumeirah Beach Residences (JBR) area.

Aesthetically designed streets, modern walkways, a floating hotel, Ain Dubai, retail options, and a host of different restaurants in Bluewaters Island make it the ultimate leisure destination in Dubai. You can even rent apartments in Bluewaters Island, if you love to live in a place that is hip, happening and fun!

The Capacity and Performance

Our last set of parameters for the Ain Dubai vs London Eye comparison is the technical aspects of these observatory Ferris wheels. Let’s look at how different they are when it boils down to capacity and performance.

You can buy London Eye tickets for approximately AED 140 (GBP 30). The London Eye ticket price may vary if you’re purchasing them online. London Eye hours begin from 10:00 am in the morning and continue till 08:30 pm in the night.

The much larger Ain Dubai compared to London Eye has 48 air-conditioned capsules. Each Ain Dubai capsule can comfortably hold 30 people at a time, bringing the approximate count of total Ain Dubai capacity to around 1,400 people. Once on the move, Ain Dubai would take almost 50 minutes to complete one full rotation.

Ain Dubai tickets prices have not been announced yet.

That’s a wrap for our Ain Dubai and London Eye comparison. While these numbers highlight how Ain Dubai takes precedence over the London Eye, there are other facts about Ain Dubai that you may not know about. For example, did you know that Ain Dubai will be equipped with smart technology? We bet you didn’t!

Just like the London Eye experience is a must-try thing to do for tourists visiting London, Ain Dubai is quickly becoming a highly anticipated activity among things to do in Bluewaters Island and Dubai.

This mega-structure lives up to Dubai’s reputation of mastering all larger than life engineering feats. If you enjoyed this post, you might want to take a look at our  Burj Khalifa and Dubai Creek Tower comparison. Come 2020, the latter is set to take over as the world’s tallest building, surpassing Burj Khalifa by 100 metres.

With new destinations and attractions popping up around the city, there is always something to talk about and try in Dubai. Want to stay updated with the latest happenings in Dubai and the rest of the UAE? Subscribe to MyBayut!

HS
A wandering soul with an unwavering passion for writing, HS decided to leave a career in finance to pursue her love for writing as a full-time profession. When not writing, she is usually found exploring new places or absorbed in a book.

Six things to do in Dubai Marina Mall besides shopping

There’s a mini park made of car parts in Sharjah