With access to latest insights and trends in the UAE real estate market, we at Bayut.com give users all the information they need when investing in this lucrative, ever-growing market. This time, we tackle the capital of this bustling country: Abu Dhabi.

Despite the dip in rent and sales prices across property types, the return on investments (ROI) continues to be a high 6.7% for apartments, and a stable 6.6% for villas.

Average rents on a decline across Abu Dhabi 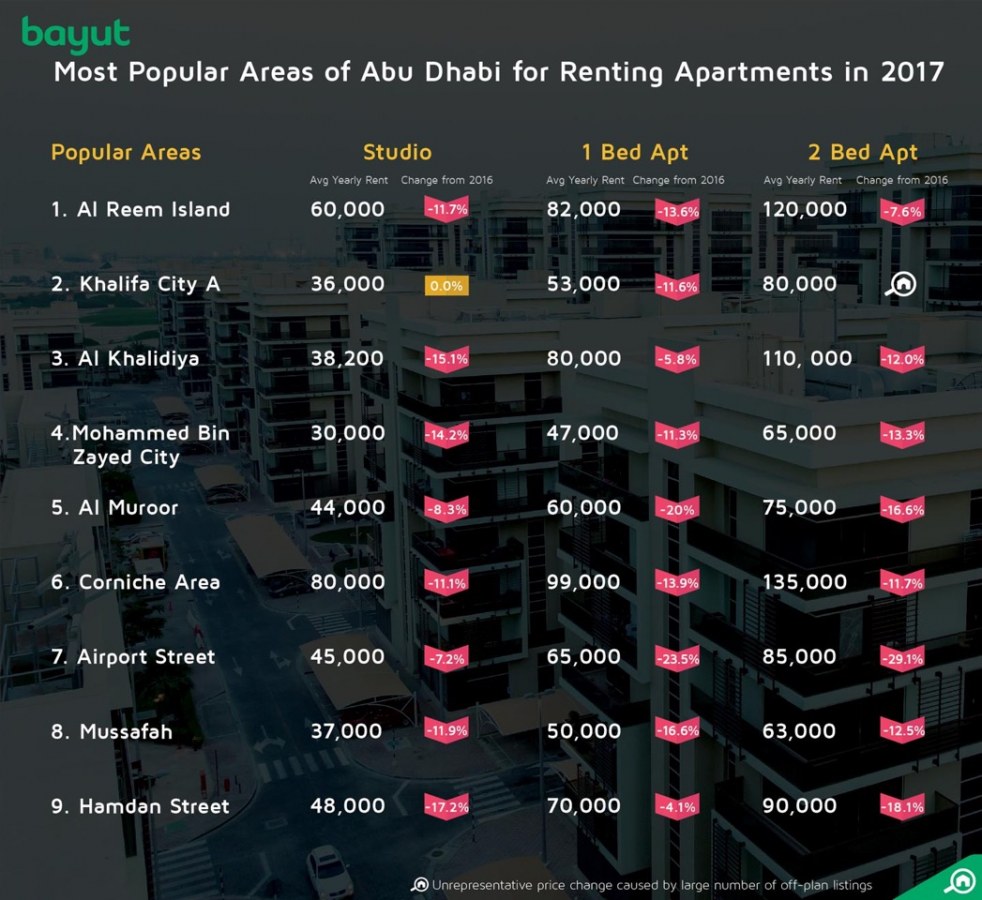 Al Reem Island has been a favourite among Abu Dhabi tenants in 2017, followed by Khalifa City A, Al Khalidiya and Mohammed Bin Zayed City.

The Corniche Area, the most expensive for apartment rentals, also made it to the list with rent prices of AED 80k, 99k and 135k, for a studio, 1-bed and 2-bed apartments, respectively. 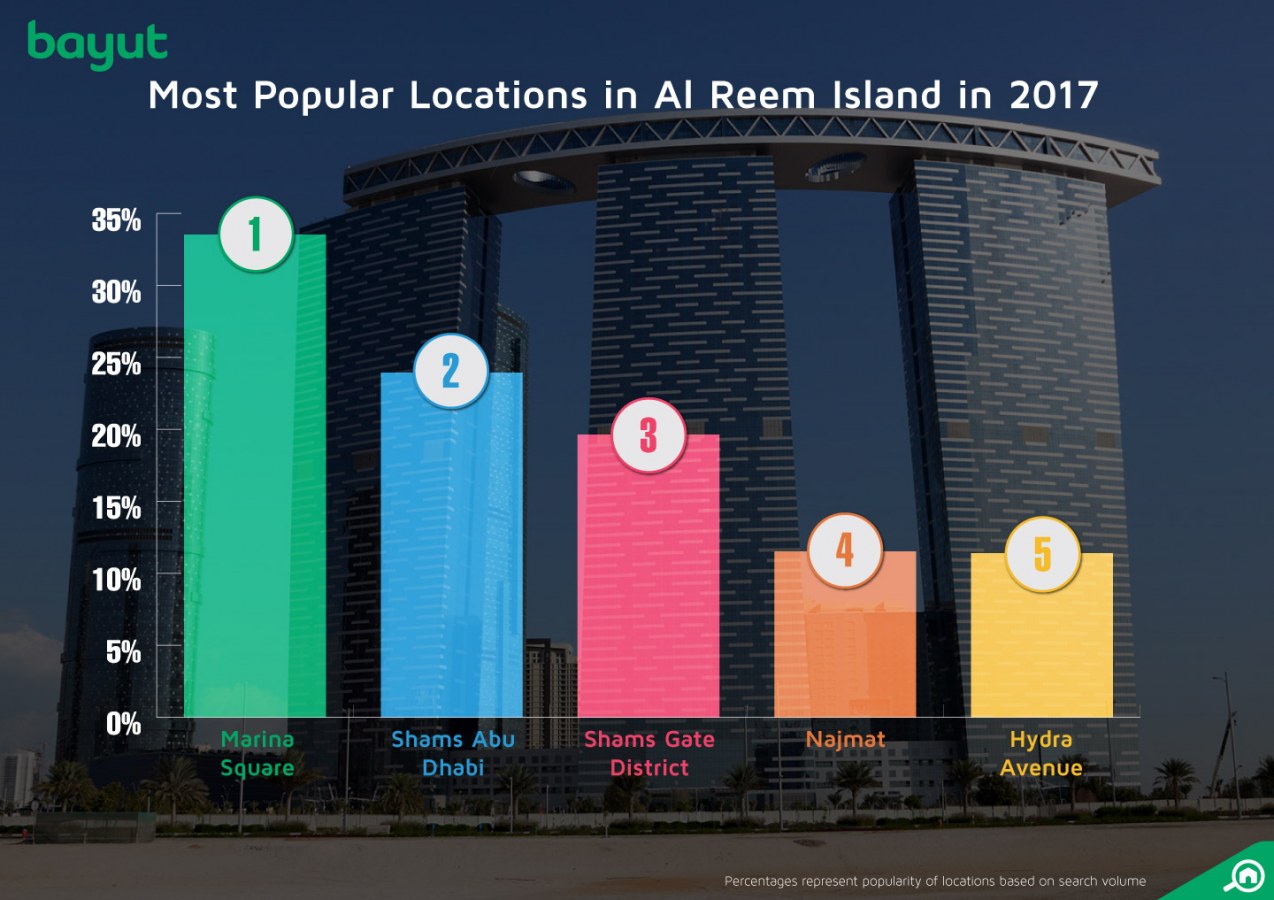 Apartments in Abu Dhabi saw a decrease in rent from 2016 across most areas, with the highest decline seen in Hamdan Street. This has resulted in the tenants paying AED 48K, AED 70K and AED 90K per annum for a studio, 1-bed and 2-bed flats, respectively. 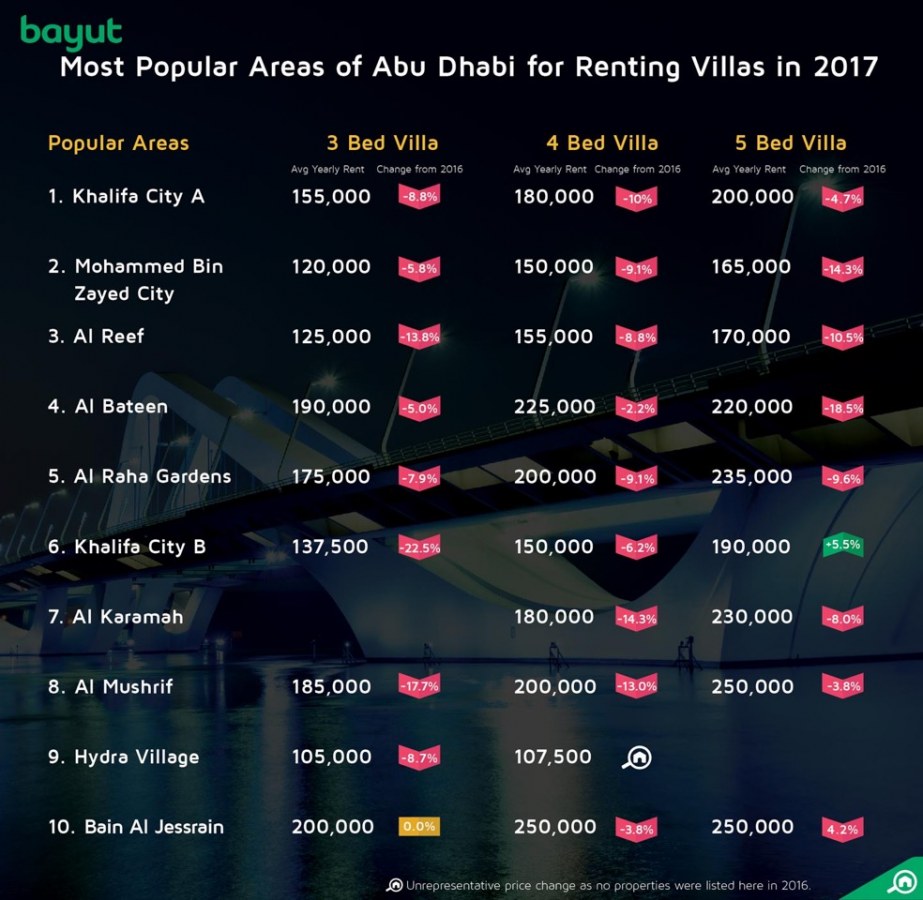 Khalifa City A fared well as the most popular choice for tenants seeking villas on Bayut.com, especially because of the fall in average rents to AED 155k, 180k and 200k for 3, 4 and 5-beds, respectively (4-10% drop from 2016). This is followed closely by Mohammed Bin Zayed City, Al Reef and Al Bateen. 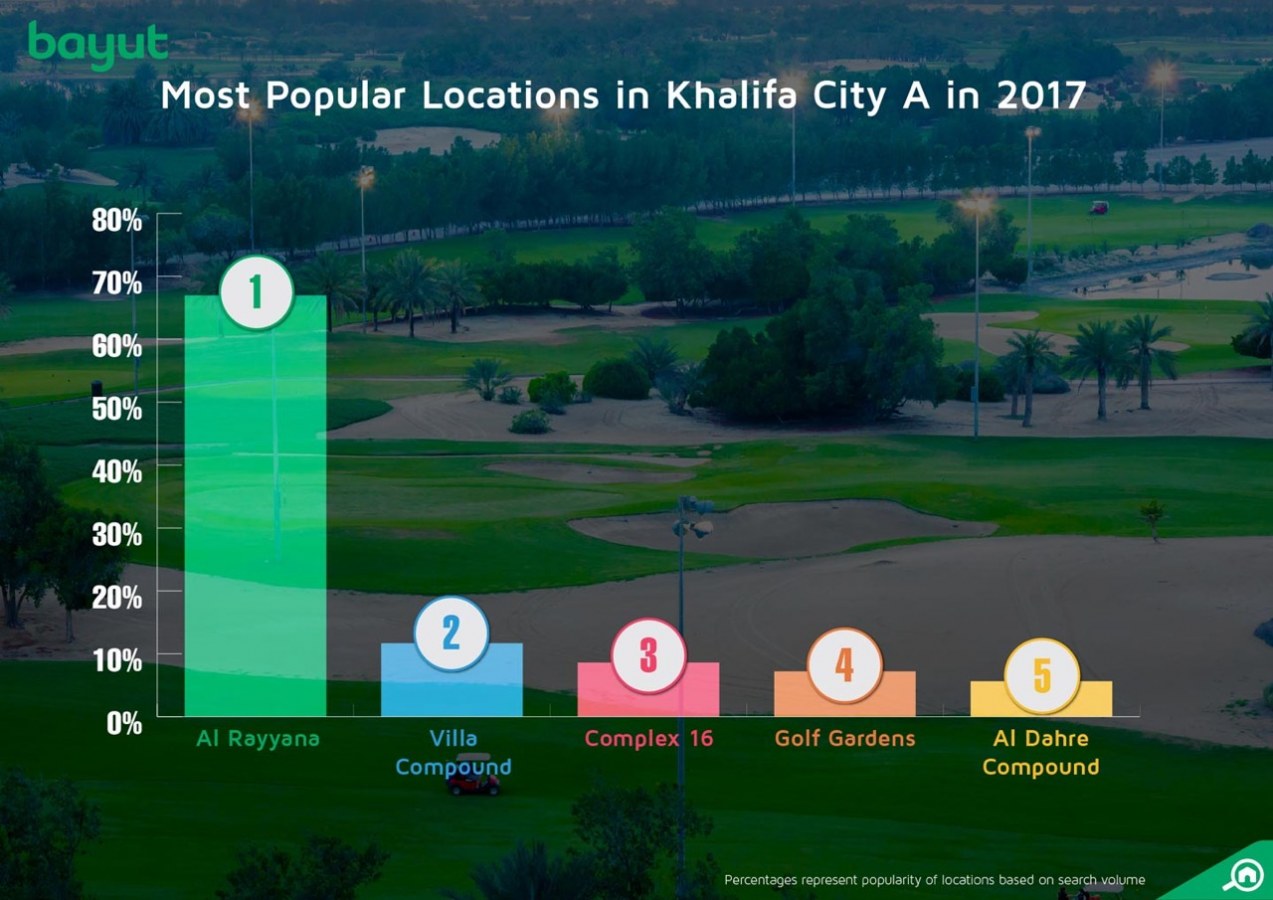 Al Rayyana took the cake as the most popular location within Khalifa City A. The gated community of 33 buildings, with BOUTIK Mall at its heart, garnered the most interest from Bayut.com users.

While most property listings saw a decline, rent for 5-bed villas in Khalifa City B saw a 5.5% increase and rent prices for 3-bed villas in Bain Al Jessrain, one of the most extravagant areas, remained constant. 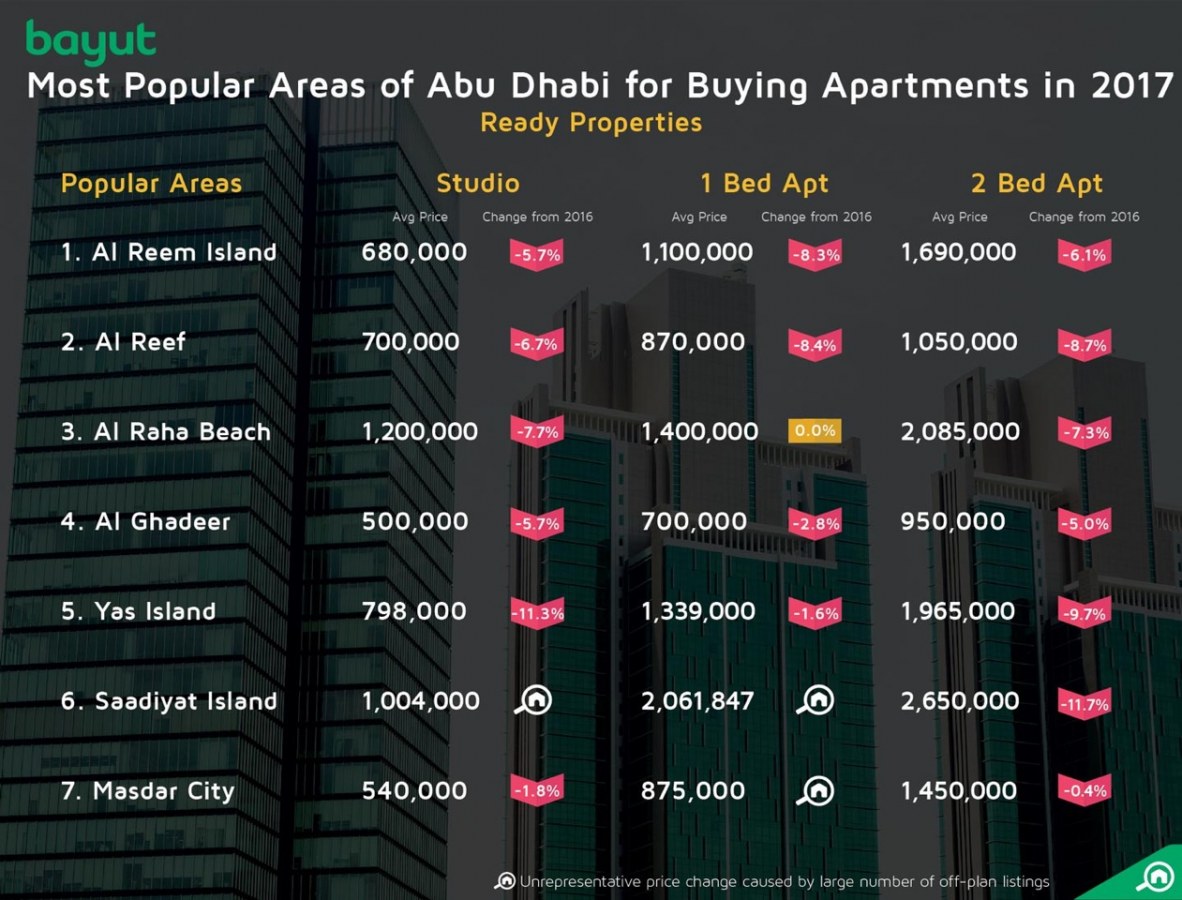 Whether it’s buying or renting an apartment, the most popular area of the capital is Al Reem Island where the average price has gone down 6-8%, depending on property type. Interested investors can now own a studio, 1-bed or 2-bed flat in Al Reem Island for AED 680k, 1.1M or 1.7M, respectively.

The costliest 2-bed apartments among popular areas of Abu Dhabi can be found in Saadiyat Island, with AED 2.6M average price. 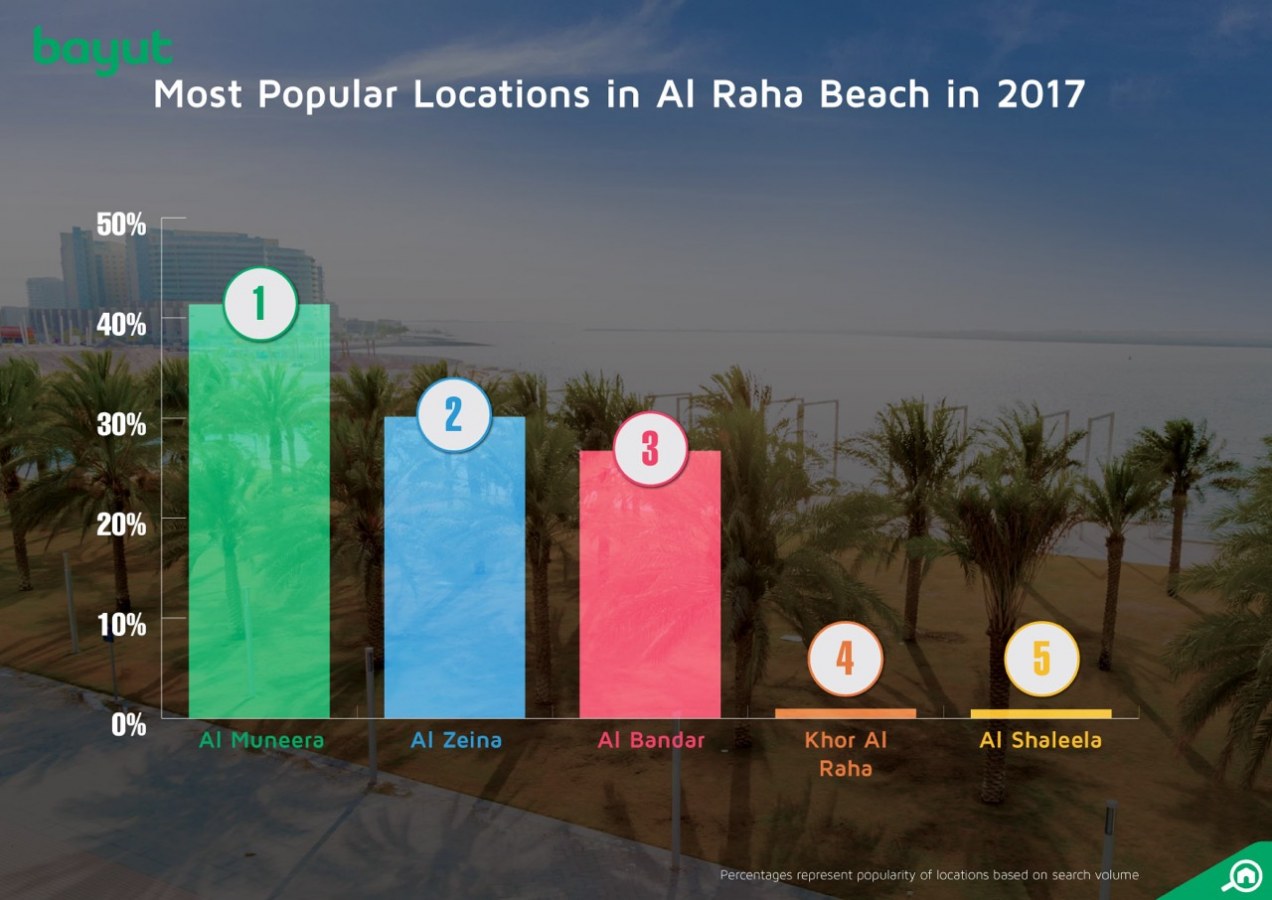 Al Reef and Al Raha Beach remain popular areas for property-buyers, with the latter offering the highest-priced studio apartments at AED 1.2M. In the Al Raha Beach vicinity, Al Muneera stood out as a popular choice, garnering the most interest among Bayut.com users in 2017. 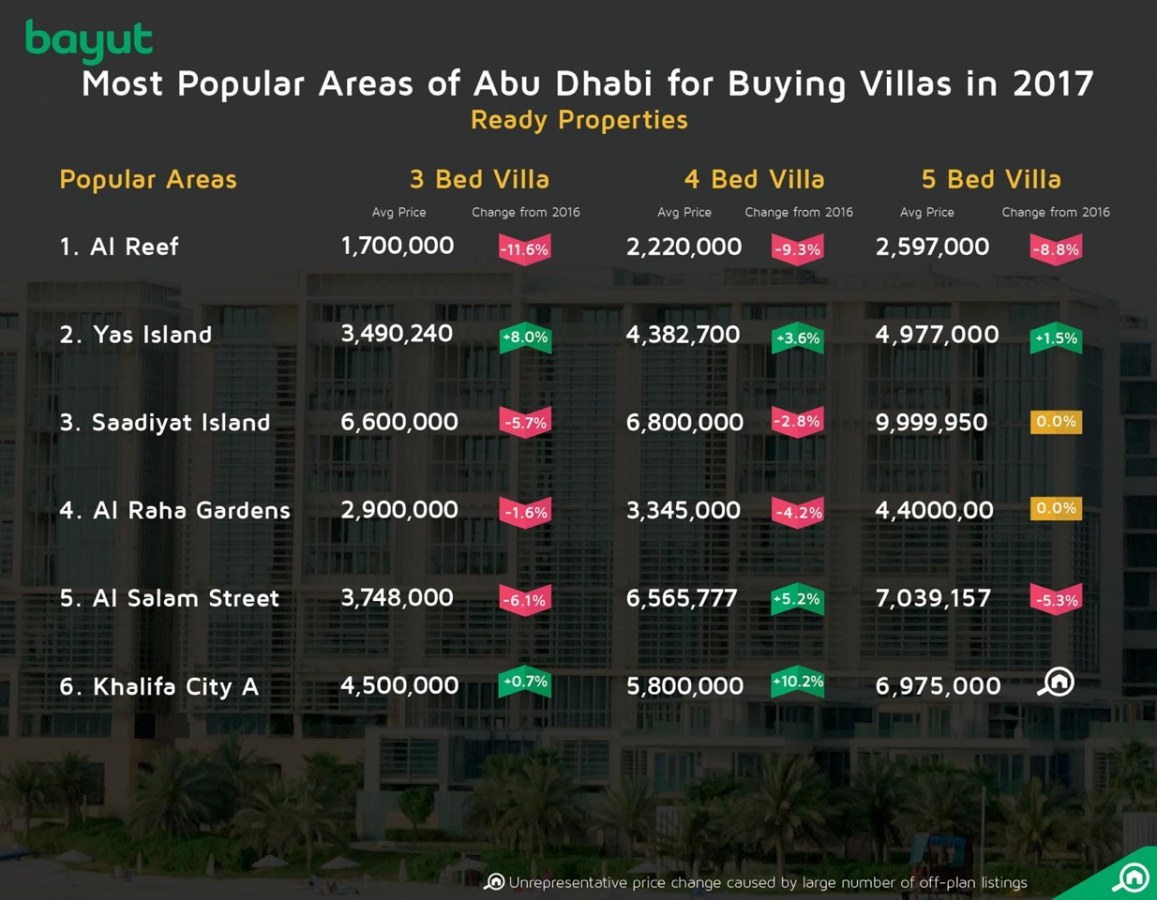 With a 7-12% year-on-year decline, the most browsed area on Bayut.com was Al Reef with 3-beds, 4-beds and 5-beds villas advertised at AED 1.7M, 2.2M and 2.6M, respectively. With a strategic location, Al Reef Villas has caught the attention of interested buyers, whether it’s for a future home in the capital or a sound investment.

While villa prices in Yas Island and Khalifa City B increased, other areas listed lower prices, consistent with the overall trend of the year. 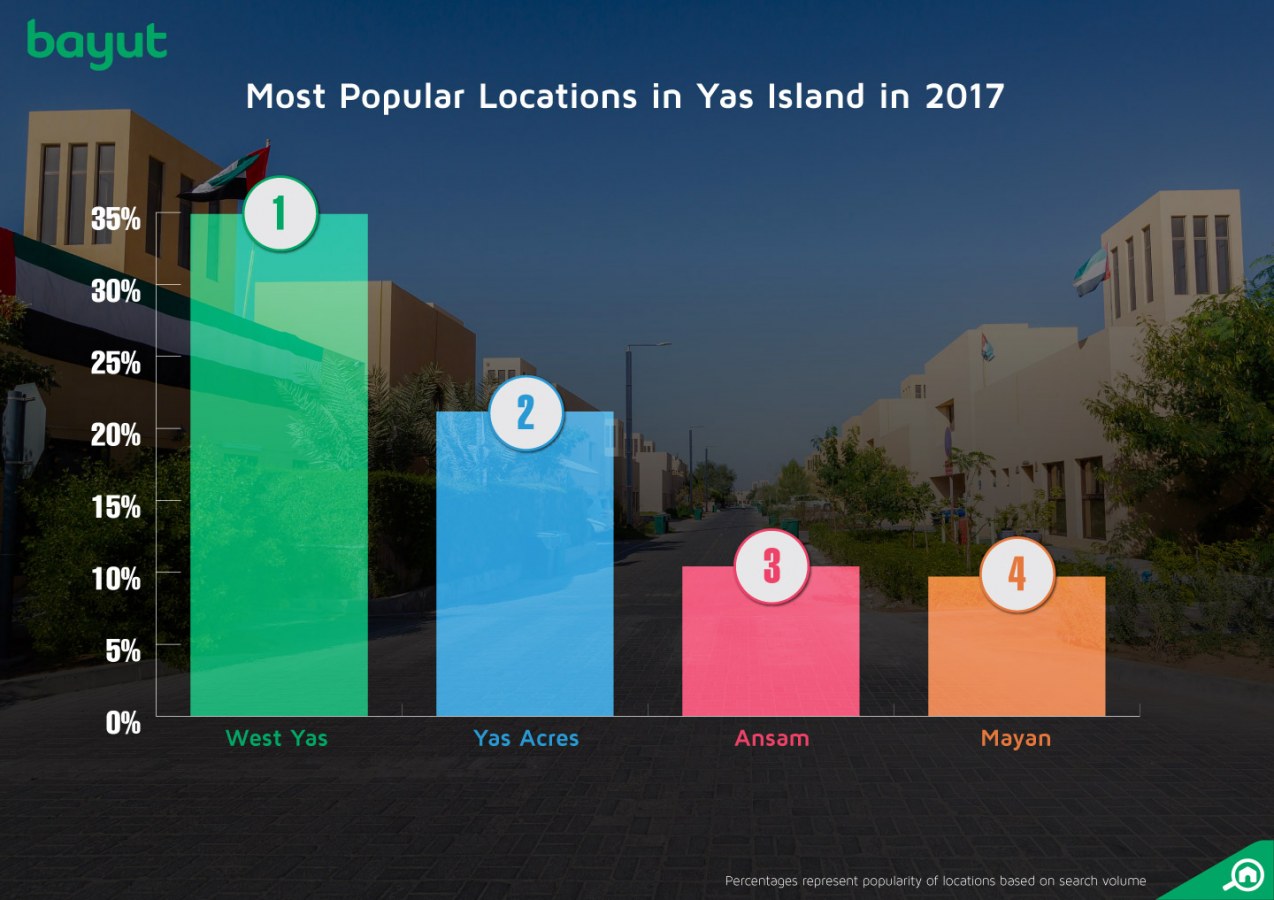 Yas Island was the second most popular area among Bayut.com users looking to buy villas in Abu Dhabi. On the island, the West Yas area garnered the most interest with about 35% of the searches being directed towards it. With a great location overlooking natural mangroves that encircle the island, West Yas boasts several luxurious 4-bed and 5-bed villas, at 4.4M and 5M respectively, in a contemporary suburban and scenic spot in the capital. 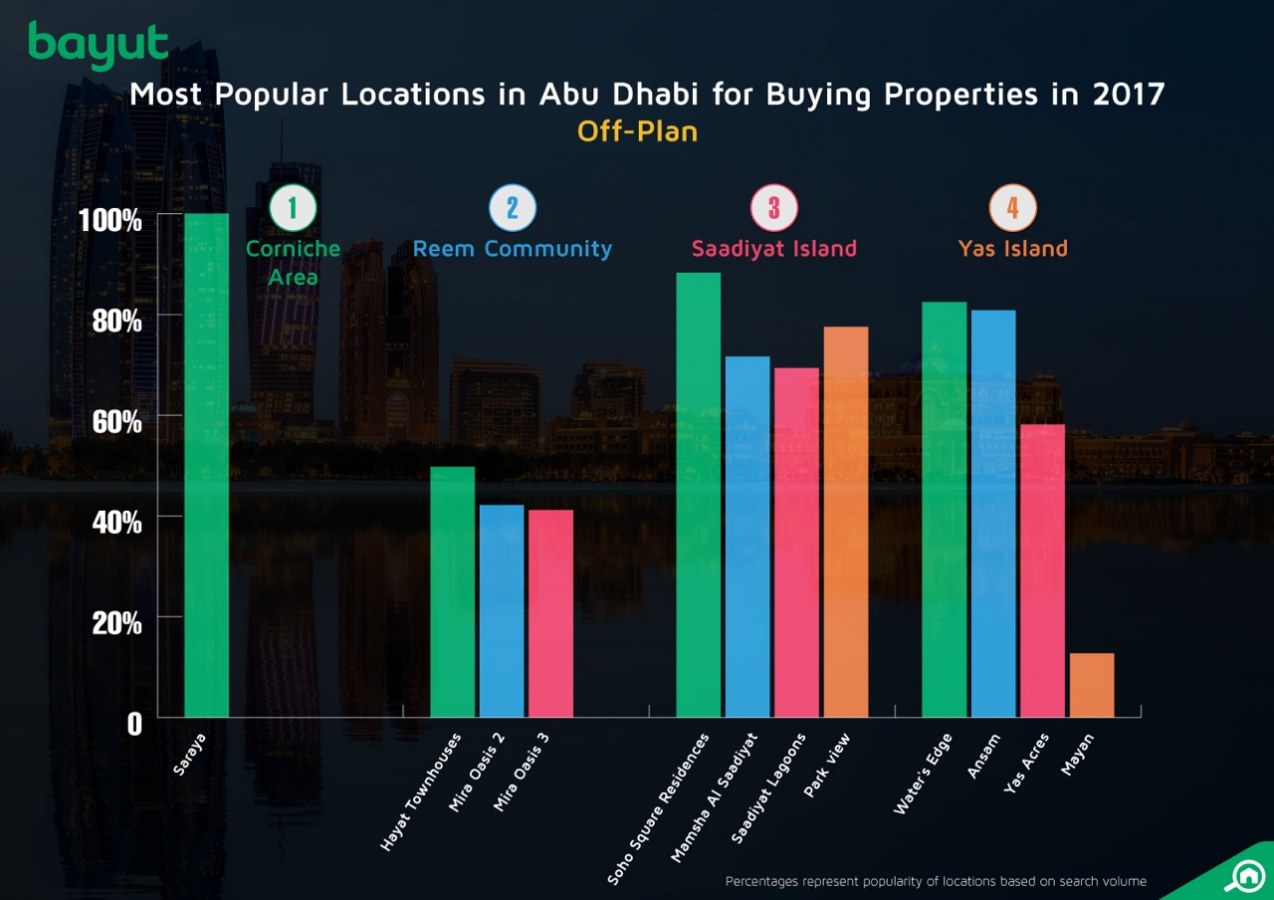 Different areas saw a shift in sales prices due to off-plan property listings. Some, like Al Reem Island and Yas Island, saw a decline in sales prices of apartments due to an increase in off-plan listings. The number of listings of villas on Yas Island priced around AED 3M increased. This has resulted in the average price falling from AED 3.8M to AED 3.6M. While other areas with fewer properties, like Saadiyat Island, played by the supply-demand rule and resulted in a surge of overall average sales price to AED 1.9M.

In Khalifa City A, the completion of a project selling at the average price of AED 6.8M has also resulted in a drop in the average asking price of 5-bed properties.

Corniche Area’s off-plan sub-community Saraya is the most visited on Bayut.com in 2017, followed by Saadiyat Island’s Soho Square Residences, and Park View. On the nearby Yas Island, Water’s Edge is the most searched off-plan sub-community, closely followed by Ansam. The trend can be attributed not only to the strong media presence of these projects, but also to the quality of lifestyle that they promise to investors and home buyers alike.

Disclaimer: The above report is based on prices advertised by real estate agencies on behalf of their clients on Bayut.com, and not representative of actual real estate transactions conducted in Abu Dhabi.

The CEO of Bayut.com, Haider Ali Khan, said: “At Bayut.com, our goal is to place extensive data-based reports and area guides at the fore of all UAE house hunting intelligence to help renters and investors alike make sound real estate decisions.”

Khan continued: “As more and more off-plan projects are completed in 2018, handed over and put on the secondary market, we can expect prices continuing to attract investors while landlords will have to stay competitive to entice potential tenants. In the long run, as the market and the broader economy move along a trajectory of diversification and maturity, the opportunity for developers and sellers to capitalise on their investment remains strong.”

Curious about property trends in Dubai? Read our exclusive Dubai real estate market report 2017 to get the scoop. 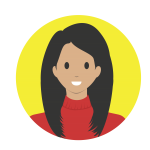 Everything you need to know about the new UAE debt law

All about Sharjah Desert Park