Waiting at the Airport Border

With so many people traveling internationally, whether for work or pleasure, it’s important to be aware of the logistics involved, especially timing. It’s no secret that people spend a lot of time at the airport, especially international passengers going through the customs process.

In 2018, the United States saw 79.6 million international travelers. These travelers came from many parts of the world, including Canada, Mexico, the United Kingdom, and the UAE. And all of them had to deal with customs, which can be a long and daunting experience. Not to mention, wait times can vary depending on the time of year, day, or week, as well as the international airport at which the traveler has arrived.

We’ve analyzed data provided by U.S. Customs and Border Protection regarding airport wait times from 2018 to 2019 to find out which major international airports have the shortest wait times and, thus, might be the best choice when traveling internationally to the U.S. 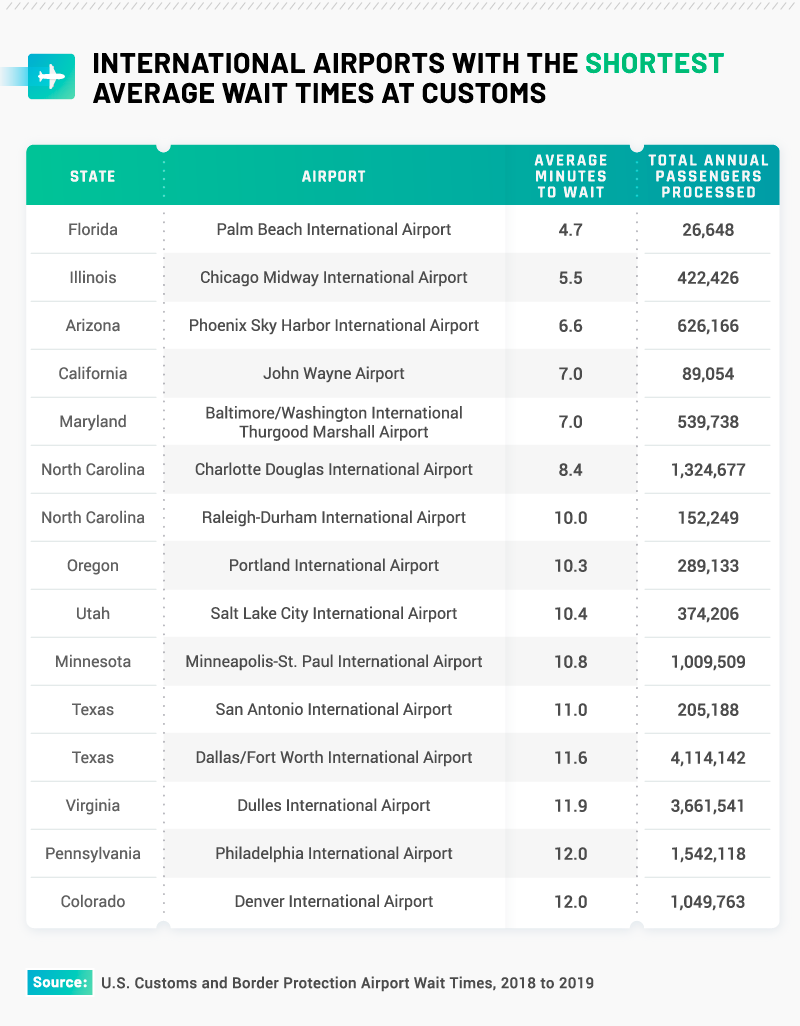 A handful of airports overseas do offer travelers preclearance for U.S. customs, allowing them to bypass this step once they have landed. One of the airports with approved preclearance is Abu Dhabi International Airport. The preclearance facility opened in 2014 and was the first in the Middle East. Those traveling on Etihad Airways to the U.S. from this airport can go through the preclearance process before departing, rather than on arrival at their destination. Basically, Abu Dhabi will handle customs so that when passengers land in the U.S., there will be no further processing. 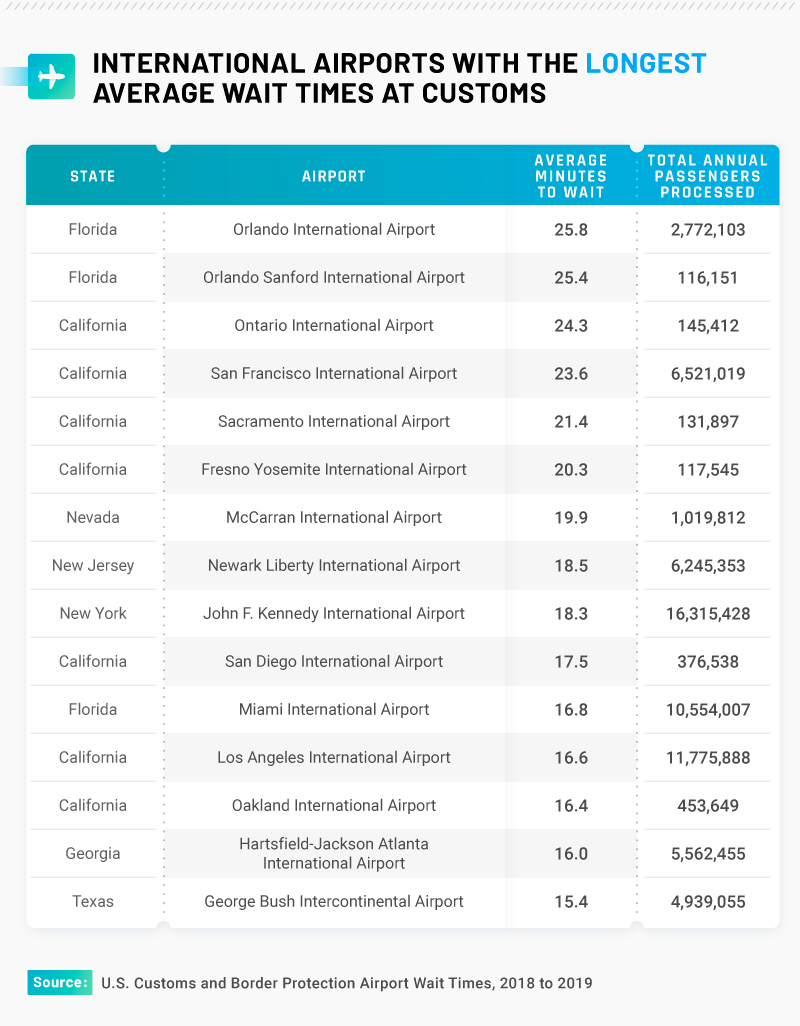 Los Angeles International appears to be much more efficient with processing, as the average wait time was 16.6 minutes – about 10 minutes less than Orlando International – despite seeing over 9 million more incoming passengers. Could this be due to a mobile app from LAX that allows passengers to go through customs directly from their phone? Many people with access to a cellphone can breeze through customs, which could contribute drastically to the shorter wait time. 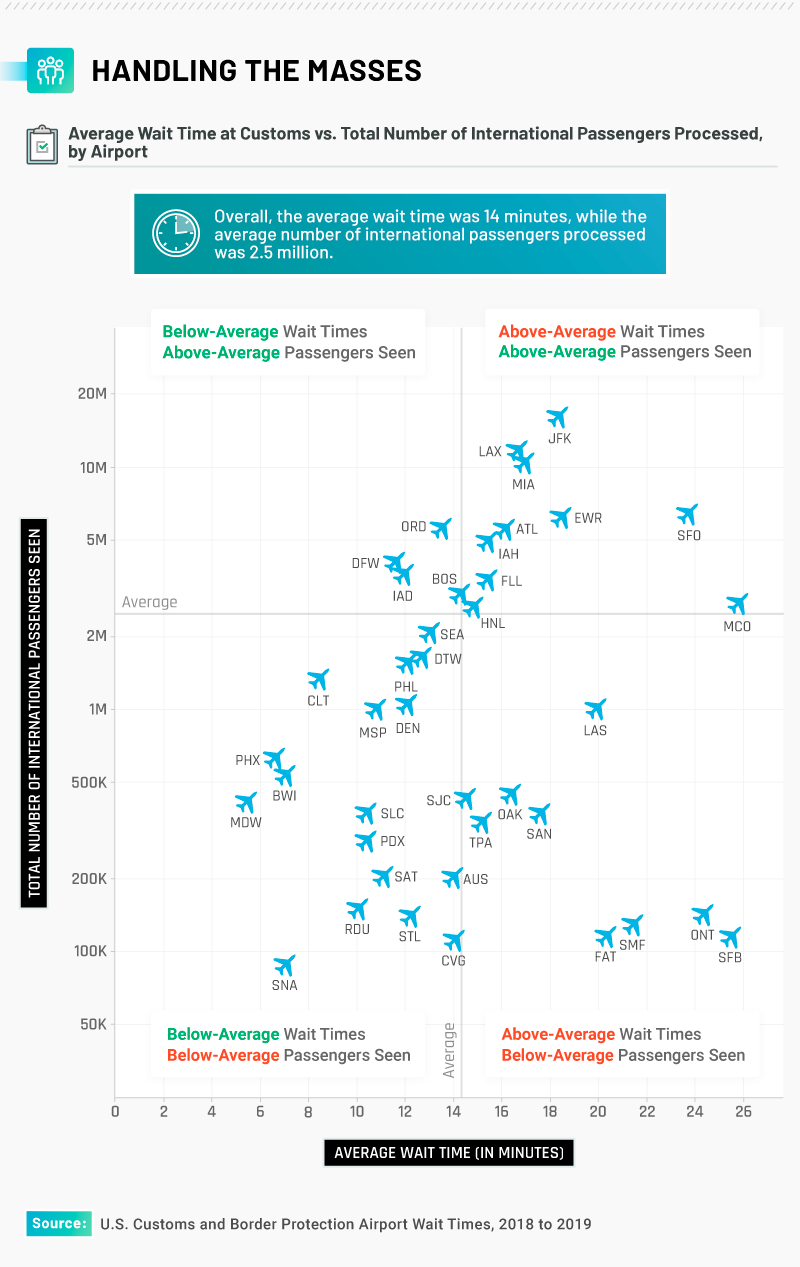 The best-case scenario for U.S. international airports would be a short wait time with a high number of passengers. This would indicate that the airport is performing its customs processing at a quick and efficient pace, thus making the experience much less stressful or frustrating for incoming passengers. The international airports that performed the best, as far as average wait time and passengers processed, included Dallas/Fort Worth, Chicago O’Hare, Dulles, and Boston Logan. 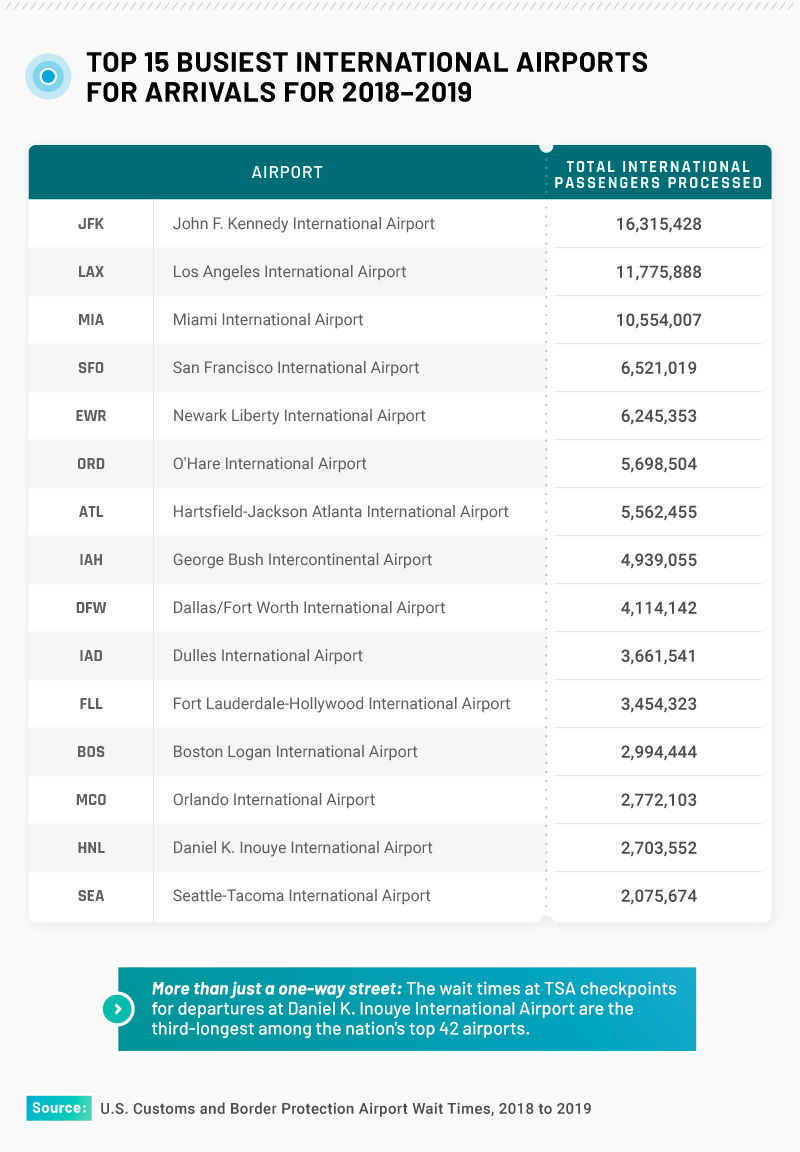 Next was Los Angeles International Airport with almost 12 million people processed – this airport was the fourth busiest airport in the world and second busiest in the U.S. in 2018. Following LAX was Miami International at 10.6 million, another airport widely known for international travel, as it has over 80 airlines serving about 150 global destinations. 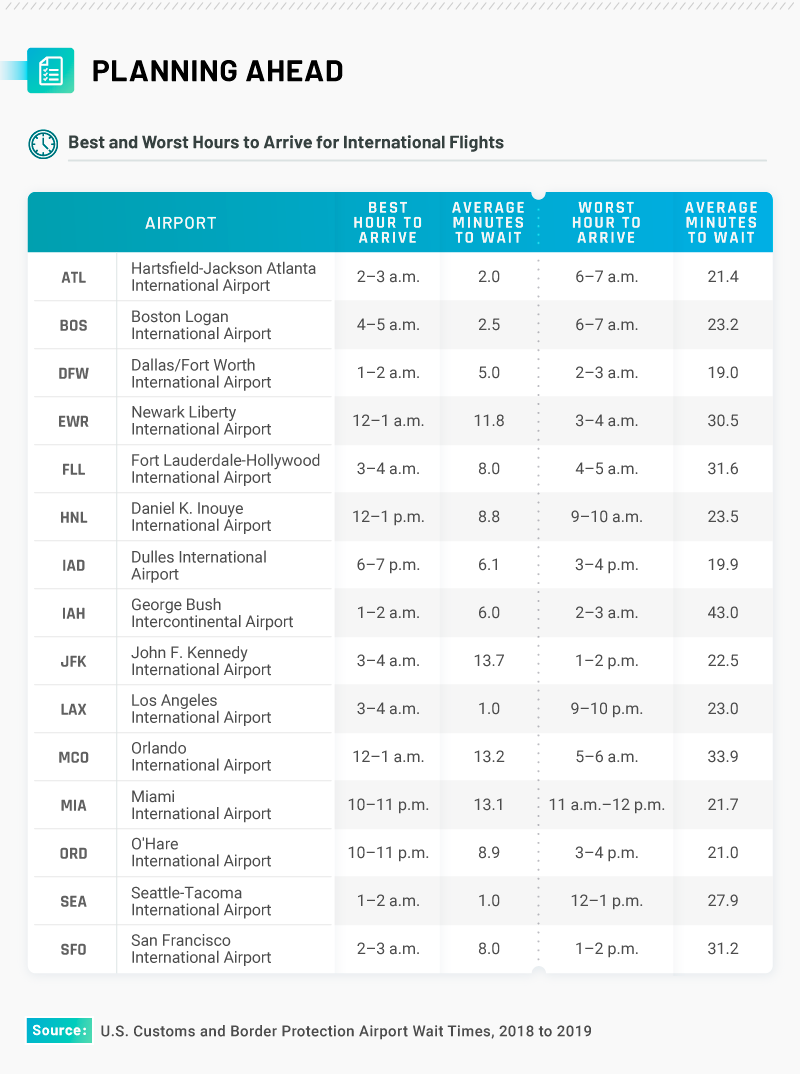 There is plenty of planning and organizing that goes into international travel no matter where you are, whether London, Thailand, Mexico, or even the UAE. You’ve got to consider things like packing, itineraries, and transportation. While these are important, so is getting through customs in a timely manner. That is why it is crucial to figure out the best time to arrive at your destination, as this can have a large effect on how long you wait at customs.

If a traveler is departing from the UAE and arriving at John F. Kennedy International Airport, the worst time for this passenger to arrive at JFK would be between 1 and 2 p.m., when the wait time is approximately 23 minutes. Instead, it would be better to arrive early in the morning, around 3 and 4 a.m., when the wait time is only about 14 minutes.

Breezing Through the Gates 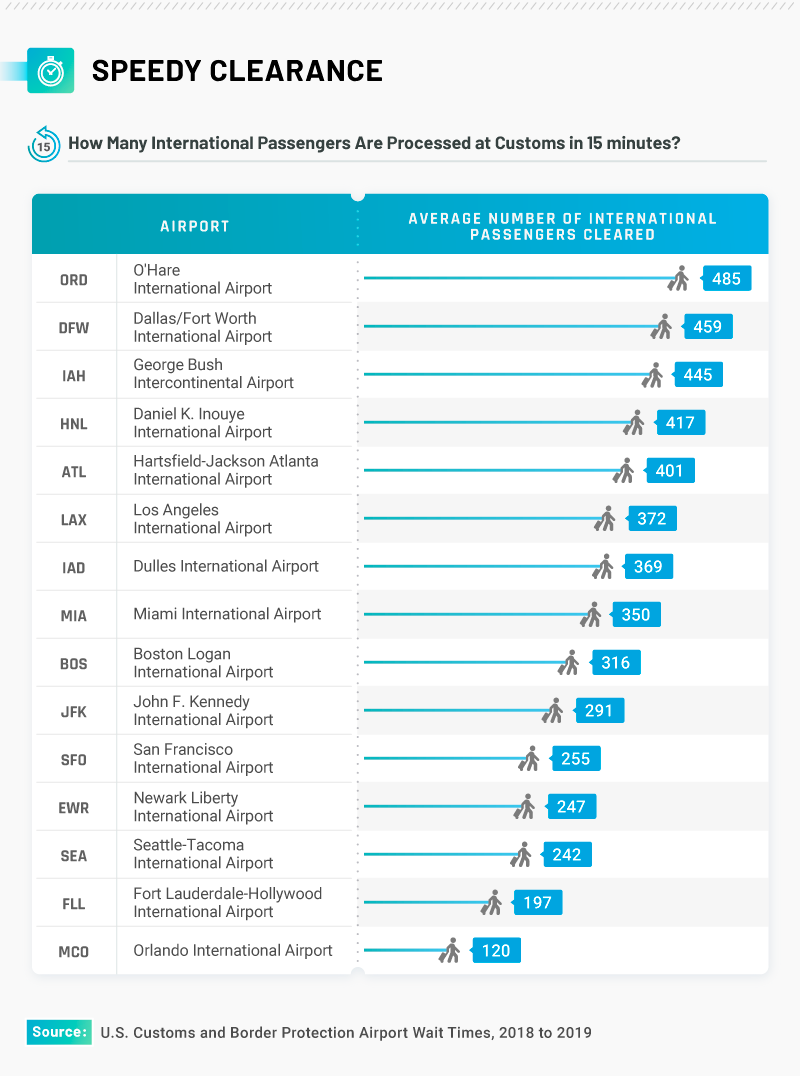 Travelers might expect to have longer customs wait times at some of the larger, more popular international airports in the U.S., but many of these bigger airports process their passengers in less than 15 minutes. Chicago O’Hare International Airport, for example, can process 485 passengers in that 15-minute period. Second to that is Dallas/Fort Worth International, which processes 459.

Even though Orlando International Airport is one of the busiest airports, it doesn’t process passengers as quickly or efficiently as O’Hare or Dallas/Fort Worth, as it only manages to process 120 passengers in 15 minutes. This is four times less than O’Hare. Also processing a low number of passengers is another Florida airport, Fort Lauderdale-Hollywood International, with only 197 incoming passengers. 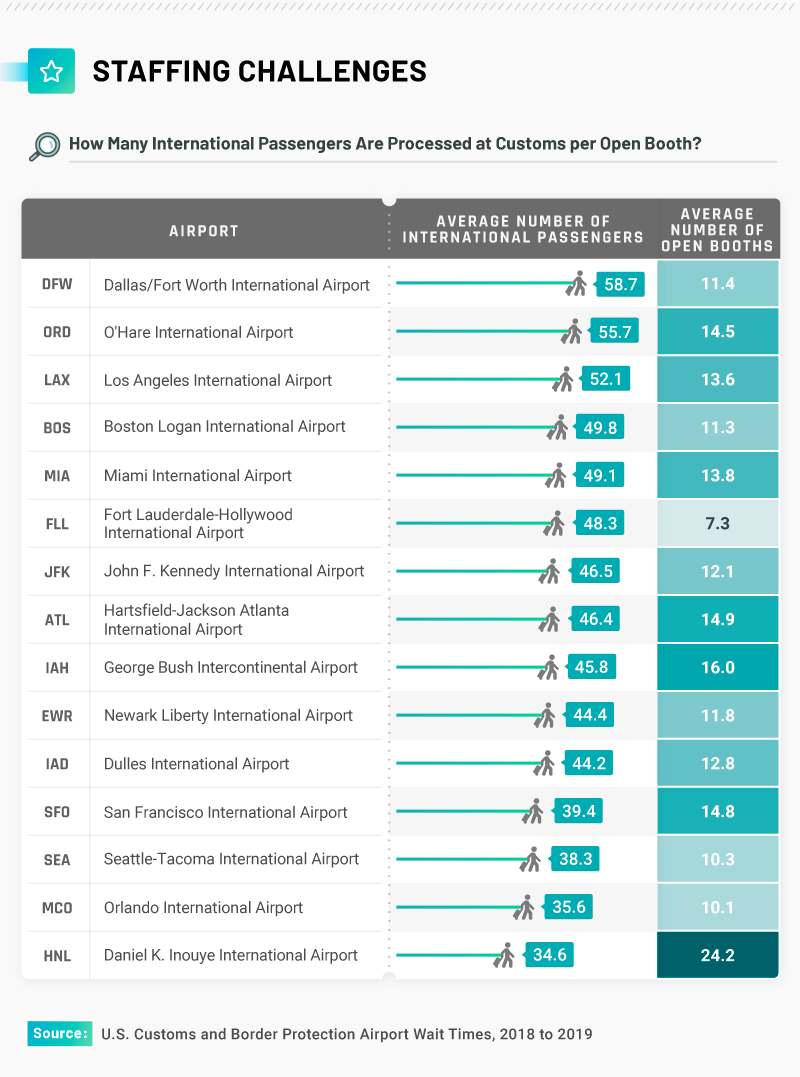 Travelers may assume that if there are more open booths during customs, more passengers will be processed at the same time, but that is not always the case.

The international airport with the fewest booths open was Fort Lauderdale-Hollywood (7.3); however, this airport was the sixth most efficient in terms of passengers processed per open booth. 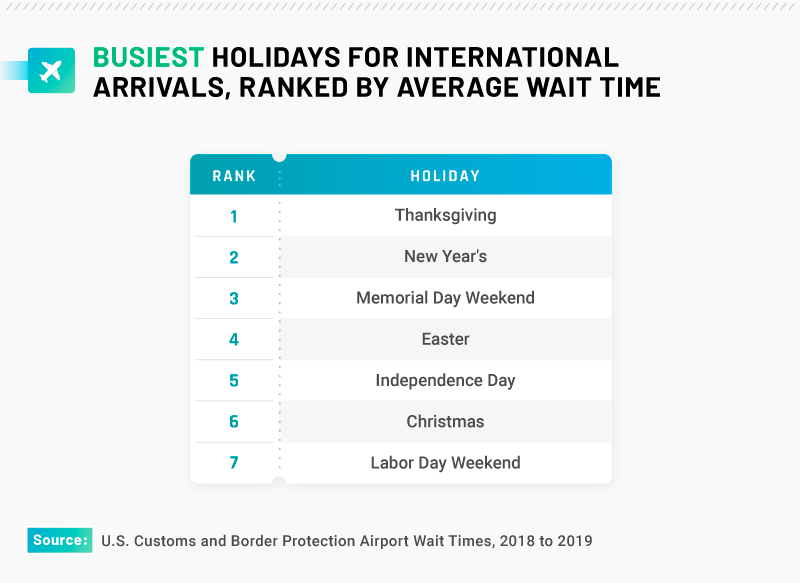 Many people choose to travel during the holidays, whether to visit family or friends or to take a relaxing vacation, so these times of year can be pretty hectic at airports, making the customs process longer than usual.

The best time of year to travel internationally is around Thanksgiving, both the days leading up to it and the day of. This could be because many people are traveling domestically, leaving the customs area much clearer for international passengers.

The holiday during which incoming international travelers experienced the longest average wait time was Labor Day weekend. In 2019, the TSA expected to see a record number of travelers between Memorial Day and Labor Day. Keep this in mind if international travel to the U.S. is a part of your plans this coming holiday.

Although the holidays that see the most travel are similar for each of the 15 busiest international airports in the U.S., the way in which passengers are handled is inevitably going to be different at each airport.

During Labor Day weekend in 2018, when incoming passengers experienced the longest wait times, there was a significant difference between the average and maximum wait times of Honolulu International Airport, which saw the shortest times, and the San Francisco and Orlando International airports, which saw the longest average times. HNL’s average wait time was over 12 minutes, with passengers waiting no more than 34 minutes. San Francisco and Orlando, on the other hand, both averaged 23 to 26 minutes, and their incoming passengers waited as long as 65 and 51 minutes, respectively. 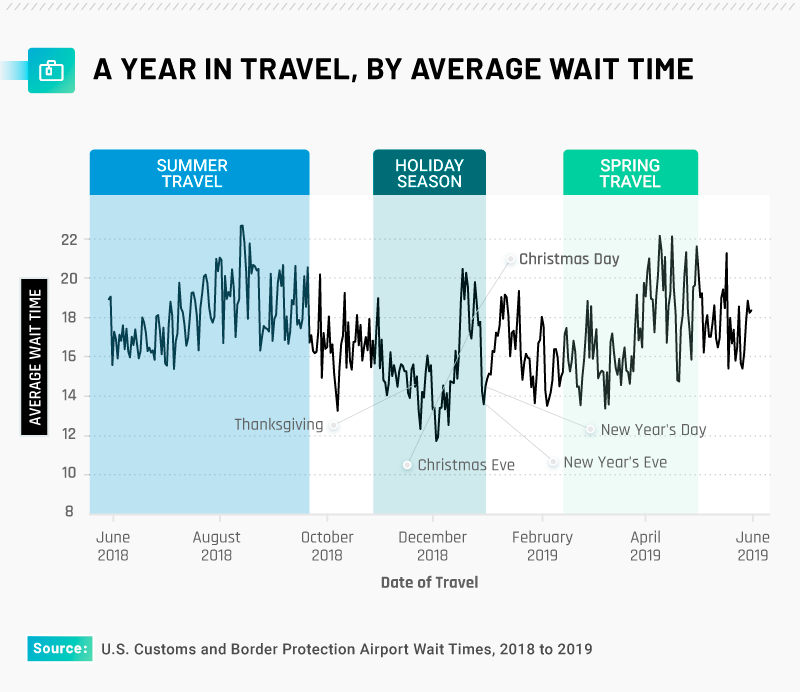 The average wait times during the holiday season, from Thanksgiving through New Year’s Day, were shorter than during the spring and summer. Airports can anticipate higher numbers of travelers during the holidays, which allow them to plan and staff their airports accordingly.

Time to Take Off

If international travel to the U.S. is in your future, especially as we approach the summer holiday in the UAE, it’s a good idea to be prepared for the wait times at U.S. airports. This information will be very helpful in making your international travel plans go as smoothly, quickly, and efficiently as possible. Should your travels have you in the U.S. for an extended period and you would like to rent your home while you’re away, let Bayut help you with your listing.

For the graphics titled “Best and Worst Holidays for International Arrivals, Ranked by Average Wait Time” and “Time Waiting During Time Off,” the dates used for analysis for each holiday are as follows:

The data were not statistically tested.

Are you or someone you know planning an international trip to the U.S.? If you would like to share this information about airports and wait times at customs, feel free to do so! Just please be sure to use this work for noncommercial use only and always link back to our original study to give us credit.

All about the BAO Festival Dubai

Everything you need to know about RERA Dubai

Your ultimate guide to the Pakistani clothing stores in Sharjah