Whether you are looking for a secure and affable environment for settling down with a family or a thriving business centre to propel your career, Abu Dhabi is one of the best urban centres in the Middle Eastern region. For people looking for an apartment or villa for residence or an ideal office space to push their business ahead, Bayut.com’s guide to the most popular renting localities in the emirate will surely get you to your desired goal. So do consider these popular areas before making a final decision.

According the data gathered over the course of January 2017, the area that attracted most interest from intending renters looking for apartments in Abu Dhabi was Al Reem Island. Of all searches on Bayut’s website for rental apartments, a majority 24% consisted of inquiries for Al Reem Island. The area is a well-planned community that has great facilities and infrastructure to support a thriving population. The unit stock is fresh and of high quality and avenues for outdoor activities make it a highly prized neighbourhood to live in. With a 7% share of enquiries, Khalifa City A was at the second spot, while Al Raha Beach took home the third spot, also accounting for close to 7% of the queries. 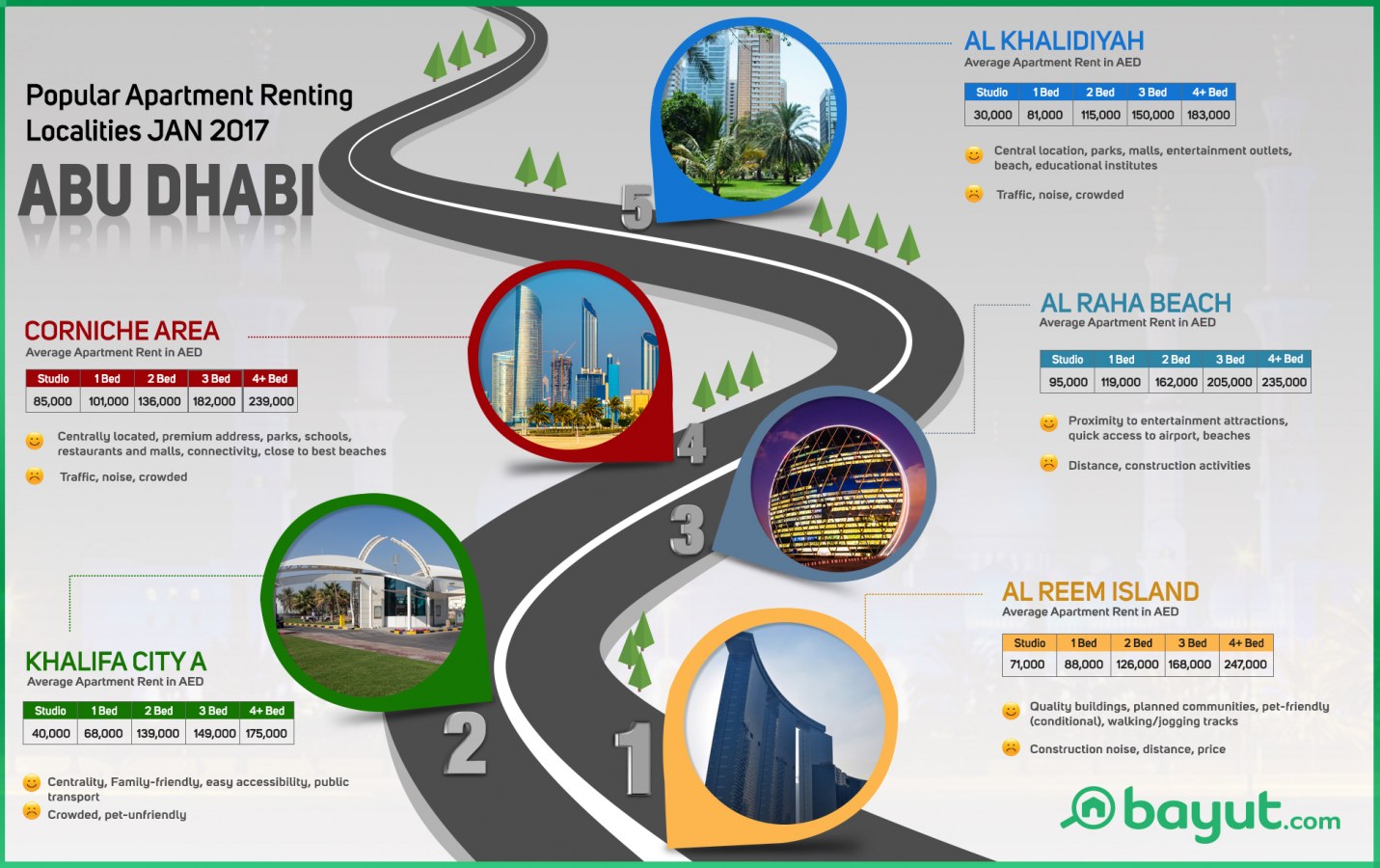 Khalifa City A is preferred for being a central locality with a host of facilities like parks, schools and hospitals, while Al Raha Beach is an up and coming neighbourhood popular for being close to entertainment destinations and the international airport. The fourth position was claimed by Corniche Area, a busy, upscale locality close to the Abu Dhabi and Sahil beaches, while the nearby Al Khalidiyah was at the number five spot.

In the villas category, Khalifa City A took the top spot on the list of most popular communities in Abu Dhabi by claiming a 28% share of aggregate searches. It was followed by Mohammed Bin Zayed City which attracted 15% of villa hunters in January. The locality is very close to the main industrial town in the emirate and a relatively new settlement known for offering residents a serene atmosphere. At the third spot we had Al Reef, a rapidly developing suburban community that accounted for 11% of the searches. The fourth and fifth spots went to Al Raha Gardens and Saadiyat Island, that respectively made up 6% and 4% of the search hits for rental villas in the emirate.

The most popular area for renting offices, per search hits received for the category in January 2017, was Al Reem Island, followed by the industrial town Mussafah. The areas received 28% and 27% share of the queries for rental office spaces, respectively. Mussafah is an economic township with numerous important manufacturing installations and is also very close to the port, making it suitable for many businesses. The third position went to Hamdan Street, which was followed by properties in the Tourist Club Area. Office spaces along the Airport Street claimed the fifth position on Bayut’s list of popular office renting areas.

Great education at reasonable prices with these affordable schools in Dubai

Best things to do on Saadiyat Island