What’s the Future of Cryptocurrency in Real Estate: Survey

2017 was definitely the year of cryptocurrency. Every news bulletin seemed to cover some shocking statistic about the rise of bitcoins. It got to the point where even grandparents wanted to know what this funny virtual gold was all about! Ethereum and Ripple emerged from the shadows of the more popular bitcoin and soon investors joined the discussions. In the UAE, things got interesting when a few developers talked about accepting cryptocurrency in Dubai real estate transactions. Not to be outdone, some landlords too joined the cryptocurrency party. But how many of us really believe we will someday buy or rent apartments in Dubai using bitcoins?

We at Bayut decided to ask UAE residents what they thought about this developing, volatile technology. Take a look at some of the local opinions on this global phenomenon!

Who Did We Talk To

We opened up the survey to our 170k followers on Facebook and 355k email subscribers, enabling us to reach out to a large population of UAE residents. Of the respondents, 9% were landlords, 1% developers, 15% current property investors and 16% prospective buyers. The remaining were tenants (49%), real estate agents (7%) and miscellaneous responders (3%). This mixed demographic gives us insight into the different perspectives people in the UAE have vis-a-vis cryptocurrency.

Investing in Cryptocurrency: Is it a good idea?

When we asked what the preferred areas of investment were, 52% of our responders were firm believers in investing in property. Gold was the second popular option at 24%, followed by stocks at 19%. Coming in last at 5% cryptocurrency seemed to invite a little scepticism. This divide in opinion was also evident when we asked whether investing in cryptocurrency was a good idea. A large majority (79%) predictably felt that it was not, but there was still a sizeable 21% that thought it was a good investment option.

One of our respondents said something truly poignant about why people are hesitation when it comes to investing in cryptocurrency.

Cryptocurrencies are backed by hope, dreams of getting rich quick, and wild speculation and nothing more. 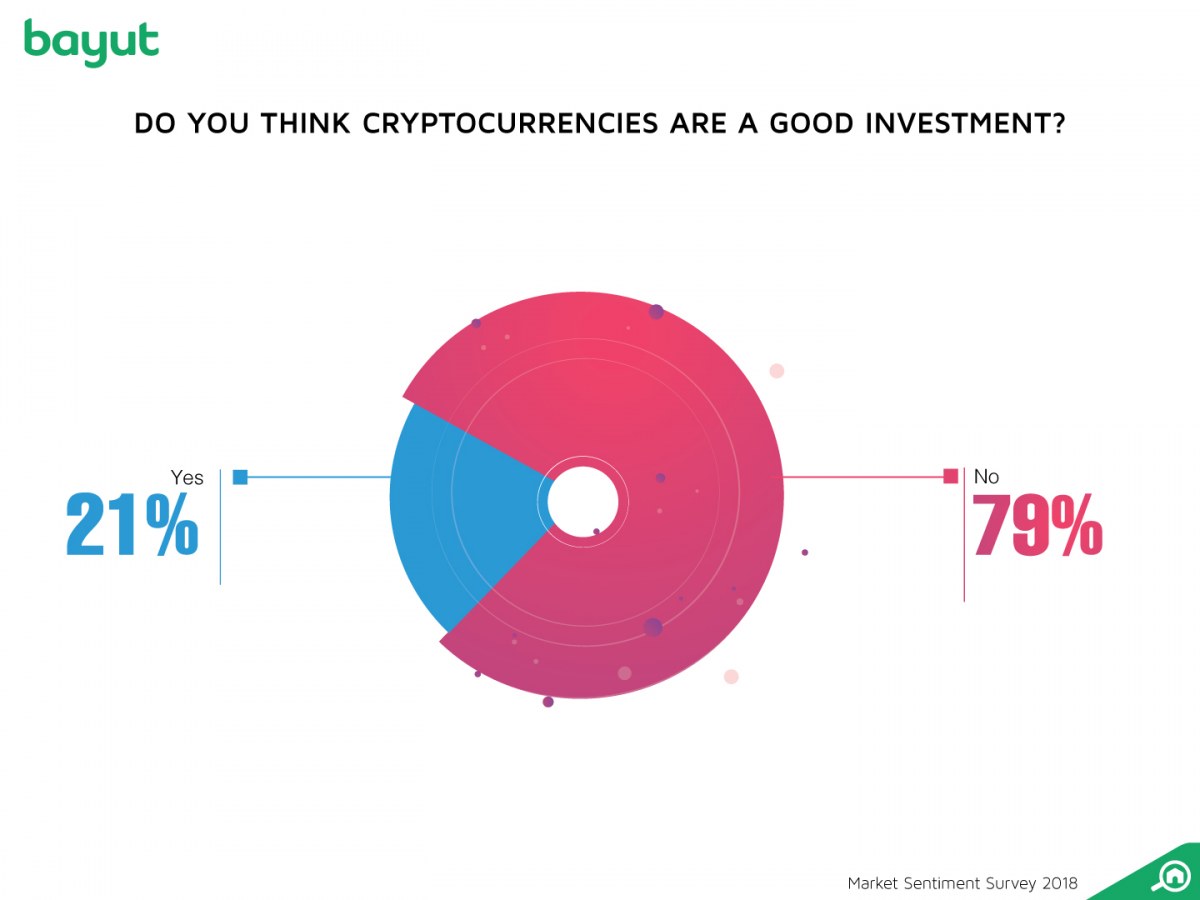 cryptocurrency in real estate: Does It Seem Plausible? 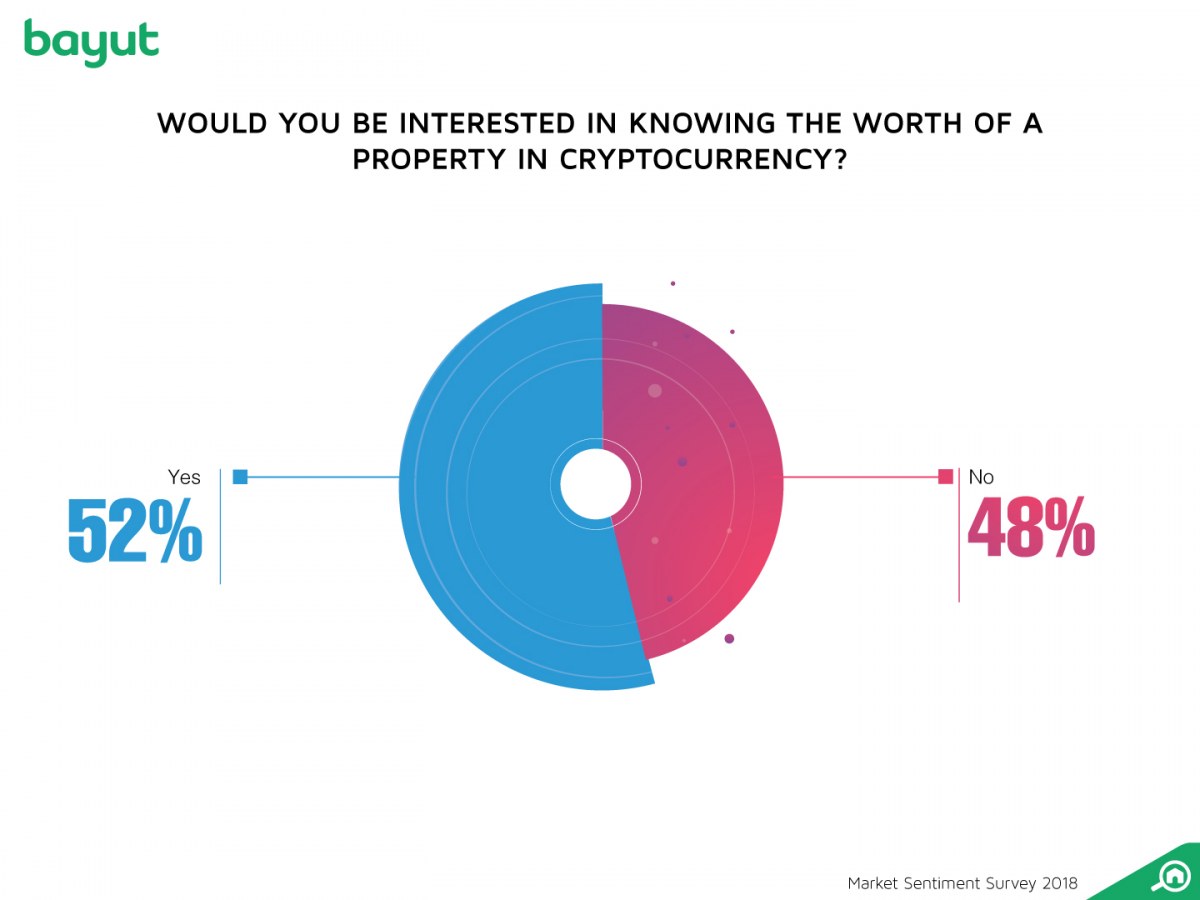 Despite the majority believing that investing in cryptocurrency may not be the best idea, an impressive 48% of the people who took our survey wanted to see how properties would be valued in cryptocurrency. Not surprisingly, the remaining 52% were happy for property prices in the UAE to remain in more traditional currencies. This clearly suggests that there is a certain demographic here that is interested in the idea of cryptocurrency in real estate.

Here’s an interesting remark by one of our responders interested in cryptocurrency, that gives us an idea how people are viewing its longevity.

“If you are considering investing in cryptocurrencies, it may be best to treat your “investment” in the same way you would treat any other highly speculative venture. In other words, recognize that you run the risk of losing most of your investment if not all of it. As stated earlier, a cryptocurrency has no intrinsic value apart from what a buyer is willing to pay for it at a point in time. This makes it very susceptible to huge price swings, which in turn increases the risk of loss for an investor. As the old saying don’t lay your eggs in one basket. So I will give it a try.” 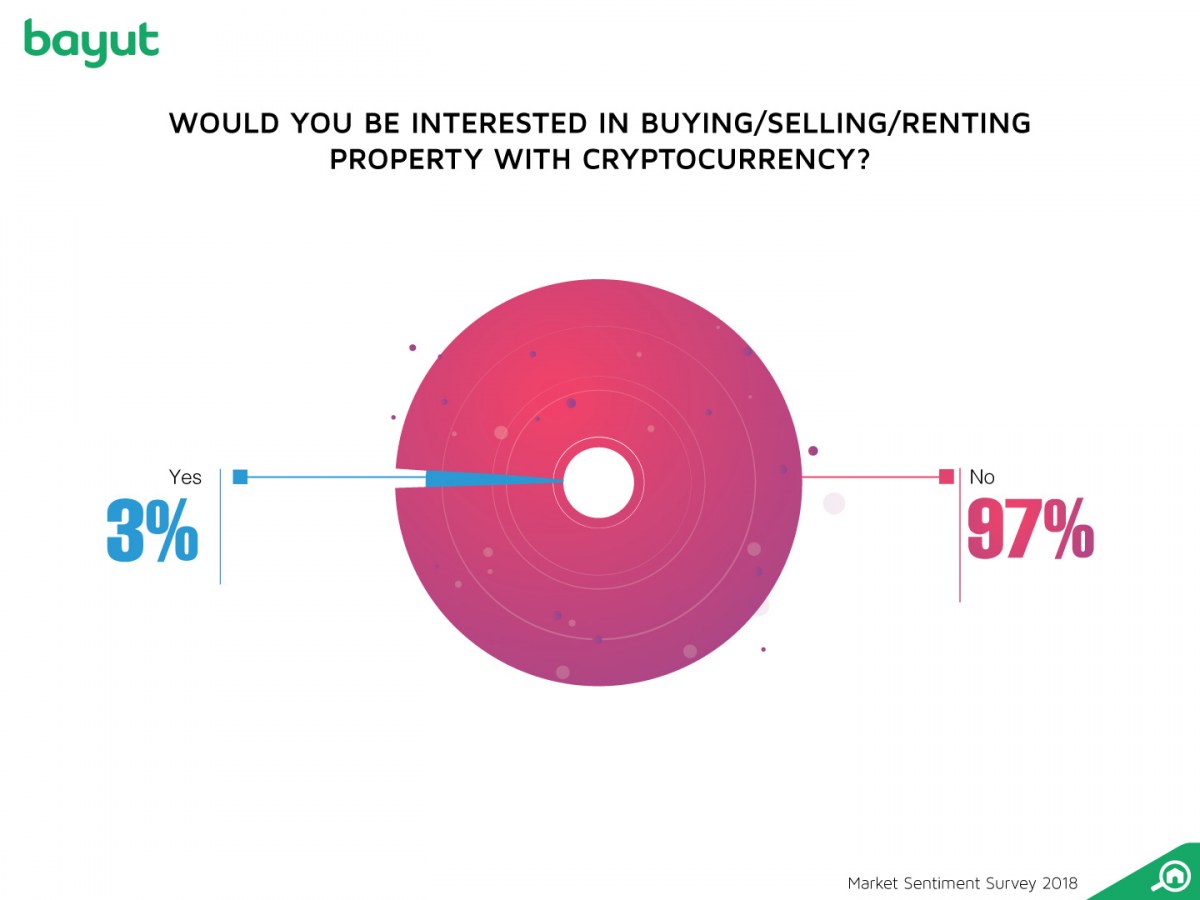 The stark reality, however, is that there is certainly a long way to go when it comes to actually using cryptocurrency in real estate transactions.  A whopping 97% of people who took our survey said they would not be open to buying, selling or renting property in the UAE using cryptocurrency! A small percentage of 3% said that they would.

In the beginning of 2017, bitcoins were priced at a meagre $900. Twelve months later, it touched nearly $20,000. Now, that’s what you call a meteoric rise! But the story doesn’t end there; today it has come down to a more modest $7000. Tomorrow it may skyrocket to $50,000 or plummet to $0! Evidently, cryptocurrency is still at a very nascent stage and will be prone to several ups and downs, scrutiny and critique.

Within the UAE, there is definitely a lot of interest in cryptocurrency. The first Shariah-compliant cryptocurrency OneGram is set to enter the market in June this year. It may just redefine the way we see cryptocurrency in Dubai real estate and the rest of the UAE. Until then, let’s wait and see how many of us will live in houses bought with bitcoins!

Since many of our respondents were interested in investing in property in the near future, here are some nifty tips on how to save up for a down payment. Don’t forget to check out our 2017 real estate market report for key insights into popular areas for buying and renting in Dubai.

Disclaimer: The data shown above is based on the responses received by Bayut.com from different demographics around the UAE.

RM
Serial coffee addict and hardcore Netflix junkie, RM enjoys quaint cafes, the smell of old books and conspiracy theories. A passionate baker, the kitchen is her haven and travel her constant companion.

Take this quick survey about Bayut.com and you may be the lucky winner of a dinner voucher for AED 500!

Northern Emirates Agency and Agent of the month for May 2018: Congratulations Notting Hills Real Estate!

Your guide to the latest sales trends in Al Rashidiya Ajman