Moving to another state or country for a new job is no small feat. Some jobs require specific skills or talent that only certain individuals can offer. With the explosion of technology and global commerce, there is greater demand for careers that may not have been around 10 years ago. Take the United Arab Emirates, for example: The information technology and finance sectors are extremely attractive to employers, as are analyst and developer positions in those fields.

To understand a more global picture, the World Bank partnered with LinkedIn to gather trends on where skills are needed and how those needs are being met. The flow of people and skills from one region to another is known as talent migration. Keep reading to learn more.

Go With the Flow

As the world becomes more connected, so too has migration become more accessible. We decided to look at the flow of workers between countries. In the interactive map above, you can examine how particular regions fit into global movement trends.

The U.S. and Beyond 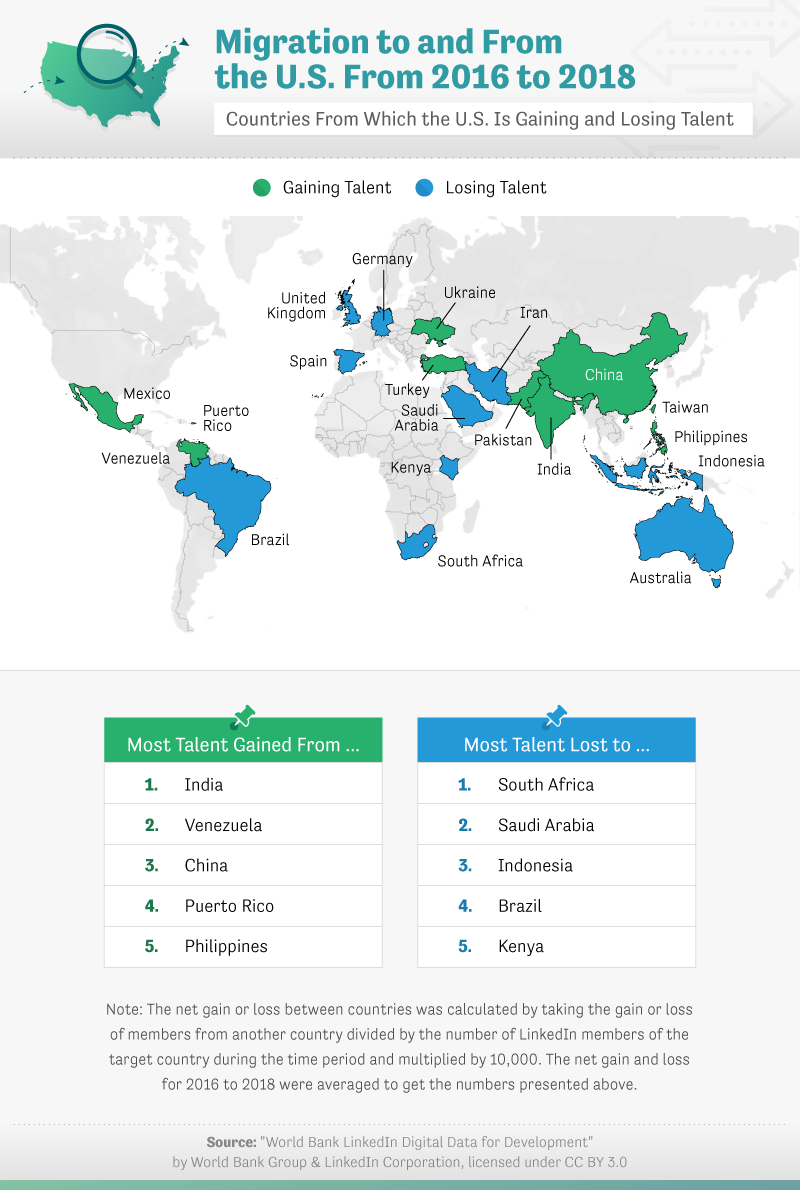 The reasons for coming to the United States are numerous, but one of them could be economic and career opportunities. India is the top country from which the U.S. gained talent from 2016 to 2018. Psychology Todaysuggests the Indian American immigration rate can be contributed to educational options and financial success potential; both forces are attractive to those looking to enter highly skilled fields such as information technology and medicine.

The University of California at Santa Cruz has also noted that, although immigration to the U.S. began disproportionately with members of India’s upper castes, the benefits they’ve gained have spanned generations and caste levels.

The U.S. also gained workers from Venezuela, China, the Philippines, and Puerto Rico from 2016 to 2018. 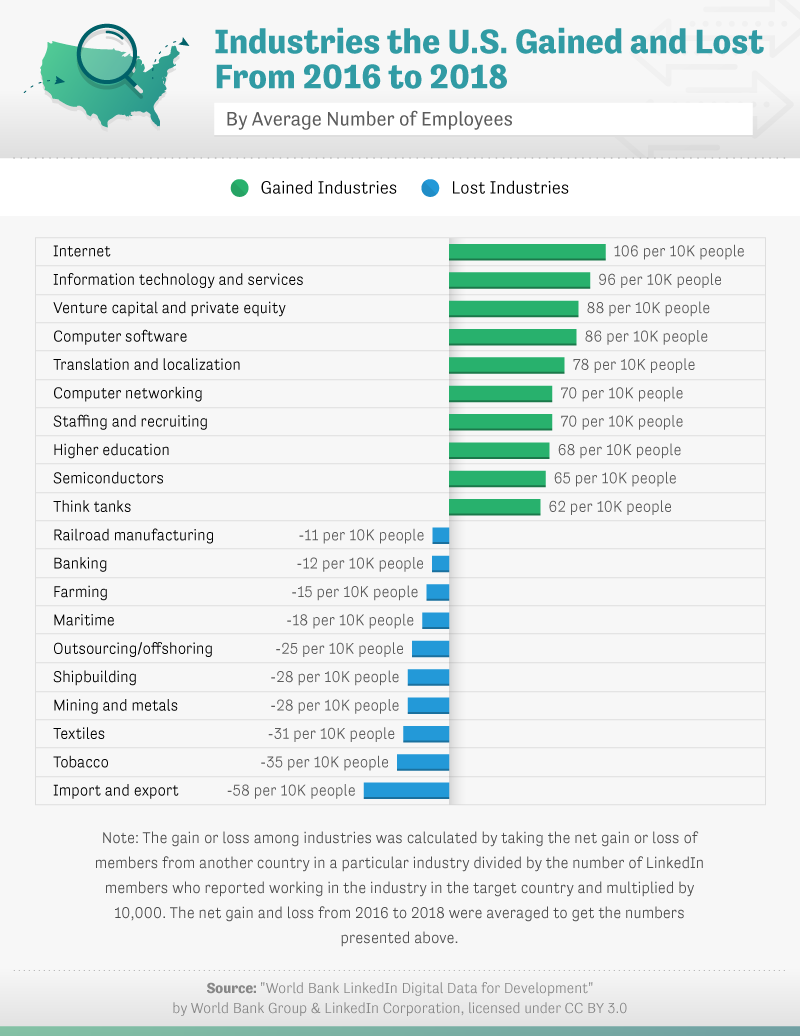 Just like the migration of people can affect countries, the movement of talent can affect specific industries. Between 2016 and 2018, the U.S. gained the most workers in the internet and information technology sectors. The average growth for these two industries was around 100 employees per 10,000 people. With the technology sector expanding in 2017, industries like textiles, farming, mining, and shipbuilding lost workers in the same period. 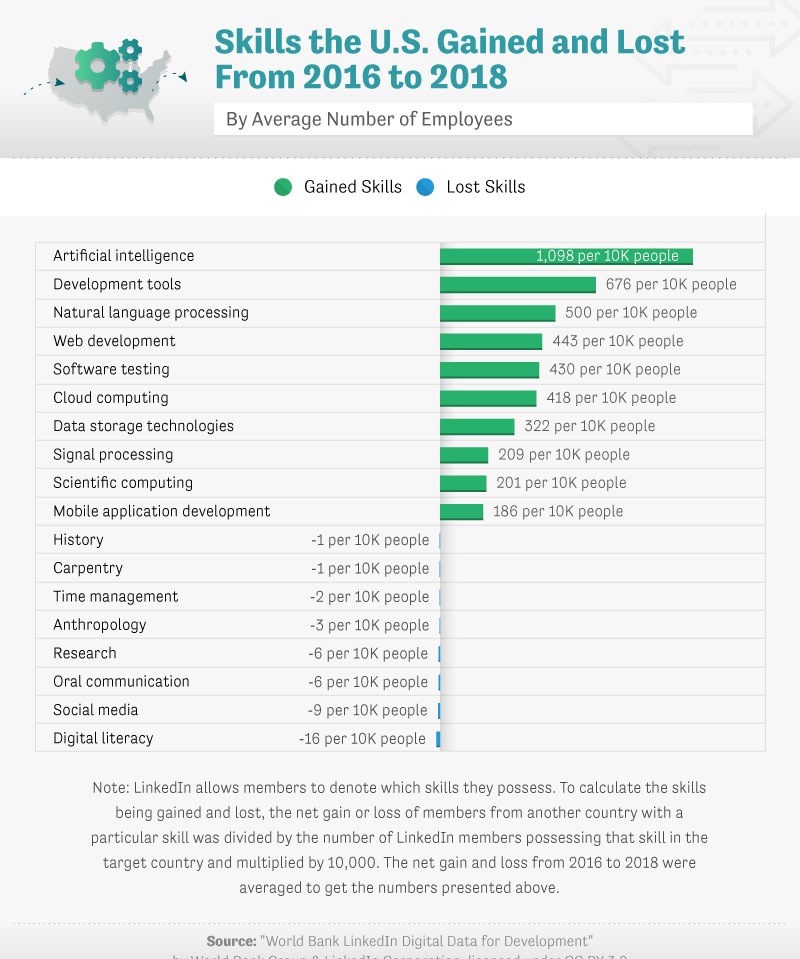 The World Bank and LinkedIn tracked the movement of skills as well, using the skills denoted on members’ profiles to follow where they took their talent. The top three skills the U.S. gained were technology-related. From 2016 to 2018, the U.S. gained the most employees with skills in artificial intelligence. According to Forbes, AI is not necessarily destroying jobs, though. In fact, a 2018 World Economic Forum study estimated that AI could contribute some 133 million jobs by 2022. And these jobs will not be limited to the technology sector; this study points to job growth in customer service, sales, marketing, and others.

When it comes to the hospitality industry, finding and keeping talent seems to be the key. For the country with the most gains (707 people per 10,000), Myanmar’s political stability has increased the demand for accommodation. While tourism has skyrocketed in the last three years, the country is still struggling to maintain talent. Meanwhile, Germany, which has seen steady increases in its hotel market, has also witnessed a boost in business and leisure travel. This likely contributes to the growth in both countries’ hospitality industries.

Of the countries experiencing losses in hospitality, none experienced as extreme of a loss as Venezuela. This is likely connected to political and social upheaval in the country in recent years.

*Please note: The World Bank obtained these numbers based on its research and the interaction of LinkedIn members from countries around the world. To streamline data collection and maintain user privacy, LinkedIn only reported those countries that met a minimum number of responses per item in each industry studied.

Migration in the Internet Industry 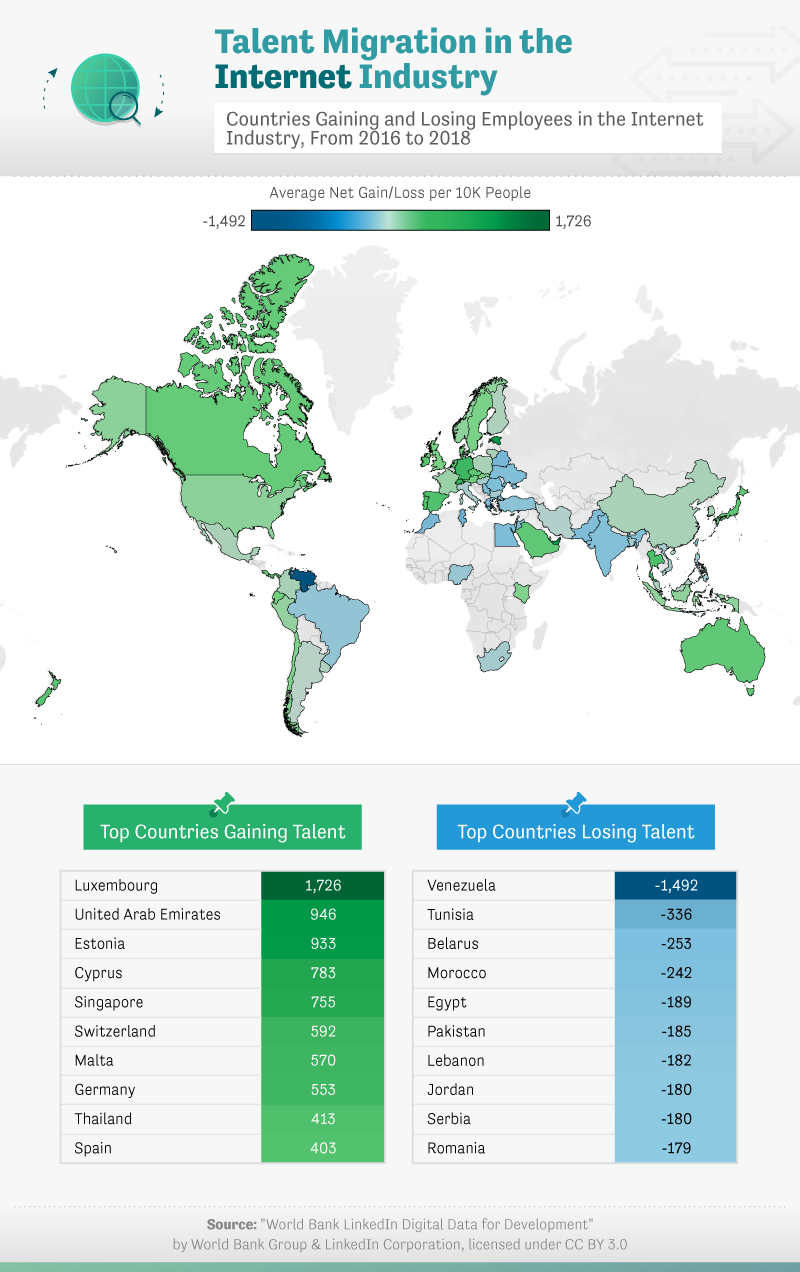 Of the 10 countries that experienced gains in the internet industry, Luxembourg, the UAE, and Estonia topped the list. Luxembourg has made extensive strides in updating and maintaining its technological infrastructure since 2017, creating a unique and highly efficient environment in which to work.

Also topping the list for the internet industry was the UAE, which is hardly surprising considering early-stage startups making up 47% of the country’s annual GDP. The UAE has fostered innovation in recent years by pursuing strategies to create an environment that is desirable to high-tech investors and companies.

Rounding out the top three countries gaining in the internet industry, Estonia is leading the way in digitizing government, health, and political access, making it one of the most complex and unique systems in the world. 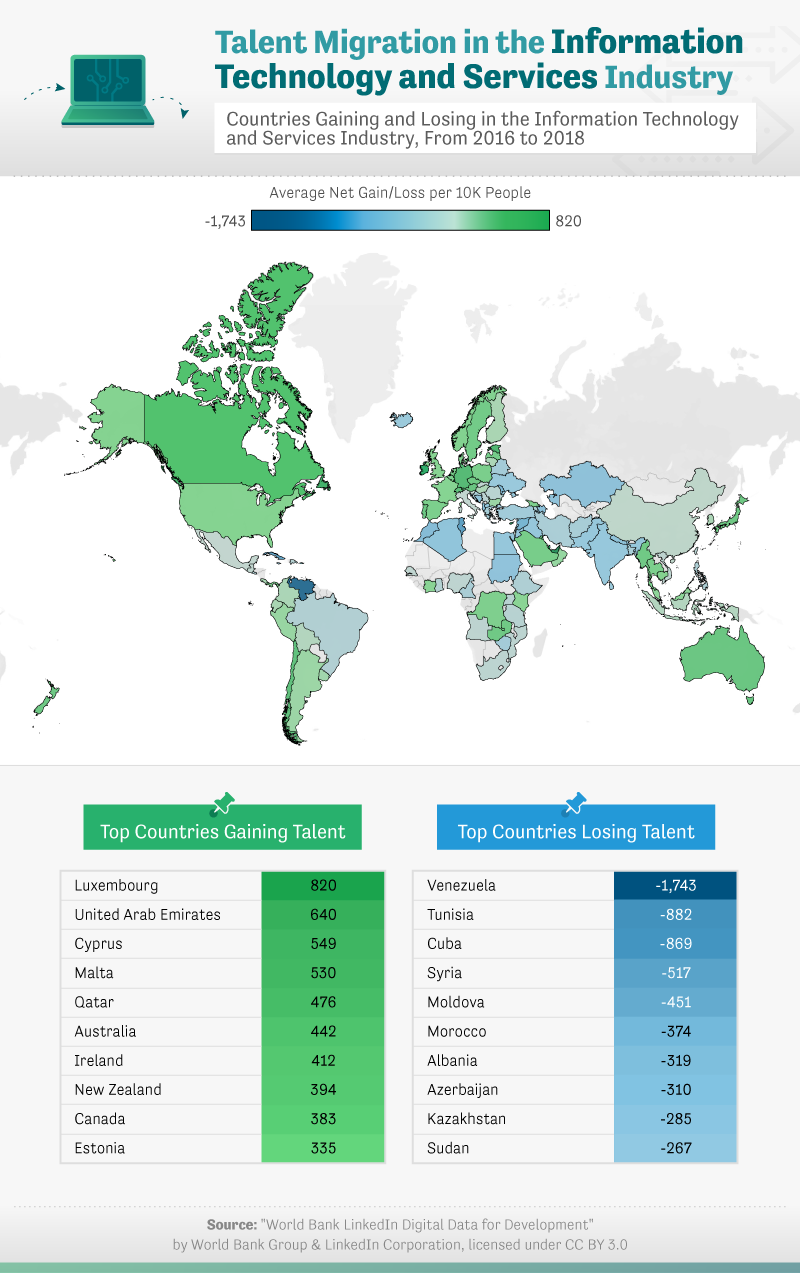 While Luxembourg might not be the first country that comes to mind for information technology, its financial sector has been a big component and the primary industry fueling its economy.

As the world distances itself from the financial crisis of 2008, the banking industry has stabilized. Some parts of the world may have recovered faster and better, but overall, banks have recovered significantly.

As noted before, Luxembourg’s economy focuses heavily on the financial sector, so it’s no surprise that it experienced the biggest gains in the banking industry from 2016 to 2018, with 583 people per 10,000 joining the industry there. Also at the top of the list for growth was Myanmar. Government reforms in recent years have sought to better regulate the industry, and the growth within Myanmar could be a result of that.

The countries whose banking industries experienced the most losses from 2016 to 2018 were Venezuela, Syria, and Albania.

Trends in the UAE

The UAE has actively promoted its many advantages to workers. According to the Khaleej Times, the UAE even has gone so far as to offer long-term visas to specialists as an incentive to draw talent to the country. It is clear that the country is serious about attracting workers that will further boost its economy.

Talent migration affects us all in one way or another, as does the continual advancement in technology sectors. Each country is on its own timeline with its own resources, but the global community has enabled people to transfer skills, talent, and ideas across continents and oceans in ways previously unheard of.

The chances are high that if you’re employed in one of these growing fields, traveling will be a part of your job. Whether you’re looking at a short- or long-term stay in the UAE, Bayut can help you find the perfect home for your needs. We have an extensive selection of apartments, homes, and villas available for rent on a weekly, monthly, or yearly basis.

We used the “World Bank LinkedIn Digital Data for Development” by World Bank Group and LinkedIn Corporation, licensed under CC BY 3.0 to examine the migration of workers around the world. All numbers presented were calculated based on net migration (arrivals minus departures). The data were normalized by LinkedIn member count in each country to allow for more equitable comparisons.

Only countries with at least 100,000 LinkedIn members at the end of 2017 were included in the data set.

Net gains and losses were calculated annually. Our visualizations of the data present the annual averages from 2016 to 2018. LinkedIn data only showed aggregated data when 50 or more LinkedIn members met the criteria to be queried. Any blanks in the data were typically due to bilateral flows not crossing the 50-observation threshold or countries only having net gains or losses on the platform.

More information about the data set and how metrics were calculated can be found here.

Due to the nature of the data, migration flows represented likely do not represent a comprehensive view of the total migration landscape of various countries. LinkedIn better covers white-collar workers and highly skilled industries, which are likely overrepresented in the data.

In a connected world, it pays to know where industries are growing and which skills are in demand (and where). If you know someone who’d benefit from the information presented here, please feel free to share this research with them for any noncommercial reuse. We ask that you link back here so that the study can be viewed in its entirety. This also gives our contributors credit for their efforts.

Best fit out companies in Dubai