Whether you’re traveling domestically or abroad, the expenses required to travel can add up quickly: British travelers alone spend over £33 billion a year journeying throughout Europe. When you’re on a budget, sorting through the endless vacation add-ons and costs can be tricky.

From choosing a flight to choosing your dinner spot, there are plenty of ways to save – and splurge – when taking a trip. What purchases are actually worth their costs? Which ones will make your vacation one to remember – and which are just a waste of money?

To find the answers to these questions and more, we surveyed 1,100 people from the U.S. and U.K. who have traveled in the last five years. Read on to find out which buys were most worth it for trips of all kinds.

What’s Worth Paying For?

It goes without saying that everyone’s budget is different, but most of us want to spend money on the things that are truly worth the cost. For American travelers, 57 percent said that museum tickets are completely worth the price when traveling, while in the United Kingdom, museum tickets didn’t even make the top 10. The United States is only home to 23 UNESCO World Heritage Sites, while Europe has more than 550. Given this difference, American travelers may be making the most of their time abroad by visiting museums and other historical sites.

It’s also worth noting that 85 percent of American vacations are domestic, while U.K. residents travel internationally more often. Maybe this is why almost 62 percent of people in the United Kingdom consider laundry services to be a worthwhile expense. It can be much easier to pack light and do laundry at your destination when traveling abroad.

Another interesting insight was that women were nearly twice as likely as men to say taxis from the airport were worth the cost. Naturally, safety is a concern for anyone traveling in an unfamiliar place, but it is typically a bigger issue for women, who may encounter more harassment or threats while walking.

We also found that 75 percent of American travelers and 68 percent of British travelers budgeted for their vacation expenses. Given that Americans tend to spend a lot on entertainment, it’s not surprising that many of them also budgeted specifically for travel. Similarly, British citizens’ spending on recreation increased significantly from the financial year ending in 2016 to the financial year ending in 2017. 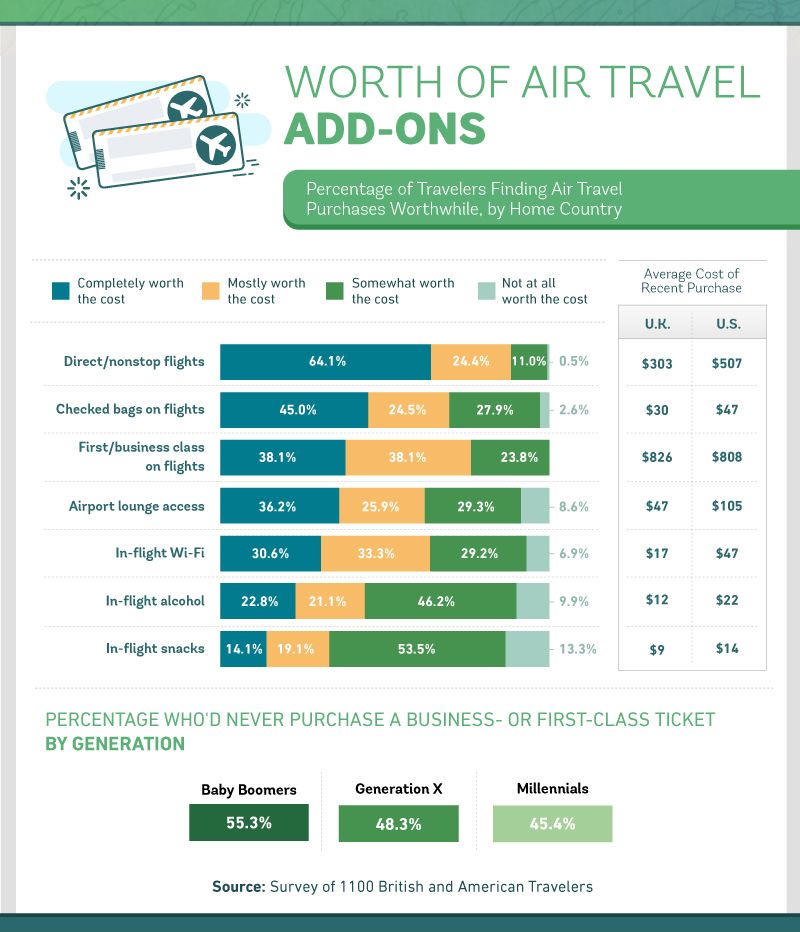 Surprisingly, millennials were the generation with the most interest in paying for first-class service, despite the fact that their average income is less than older generations. Though some may see this as indicative of reckless spending, it could also be that many millennials tend to value experiences more than money.

Overall, 38 percent of flyers considered a first-class ticket to be completely worth it. Despite the high price, first-class seats offer great advantages for some flyers, such as the ability to get a full night’s sleep in a lie-flat seat (which is now available on some domestic routes in the U.S.). Even if you’re not traveling for business, comfortable accommodations can significantly improve the quality of your flight and, therefore, your mood, if you’re looking to treat yourself on your next trip.

As nice as it can be to splurge occasionally on our vacations, many of us have to keep finances in the forefront when traveling. However, there’s more to traveling than just money – time is also a key consideration both American and British travelers often take into account. For U.K. residents, 69 percent would rather pay $100 for a one-hour flight than $5 for a 12-hour bus ride.

Despite how much cheaper a bus ride could be, it’s important to look at the cost versus the benefit. A one-hour flight can be a much more enjoyable means of travel than a 12-hour bus ride, and the time saved may be well worth the extra cost. Similarly, both U.S. and U.K. residents overwhelmingly agreed that they would rather stay in a $100-per-night private hotel room than a $5-per-night hostel. 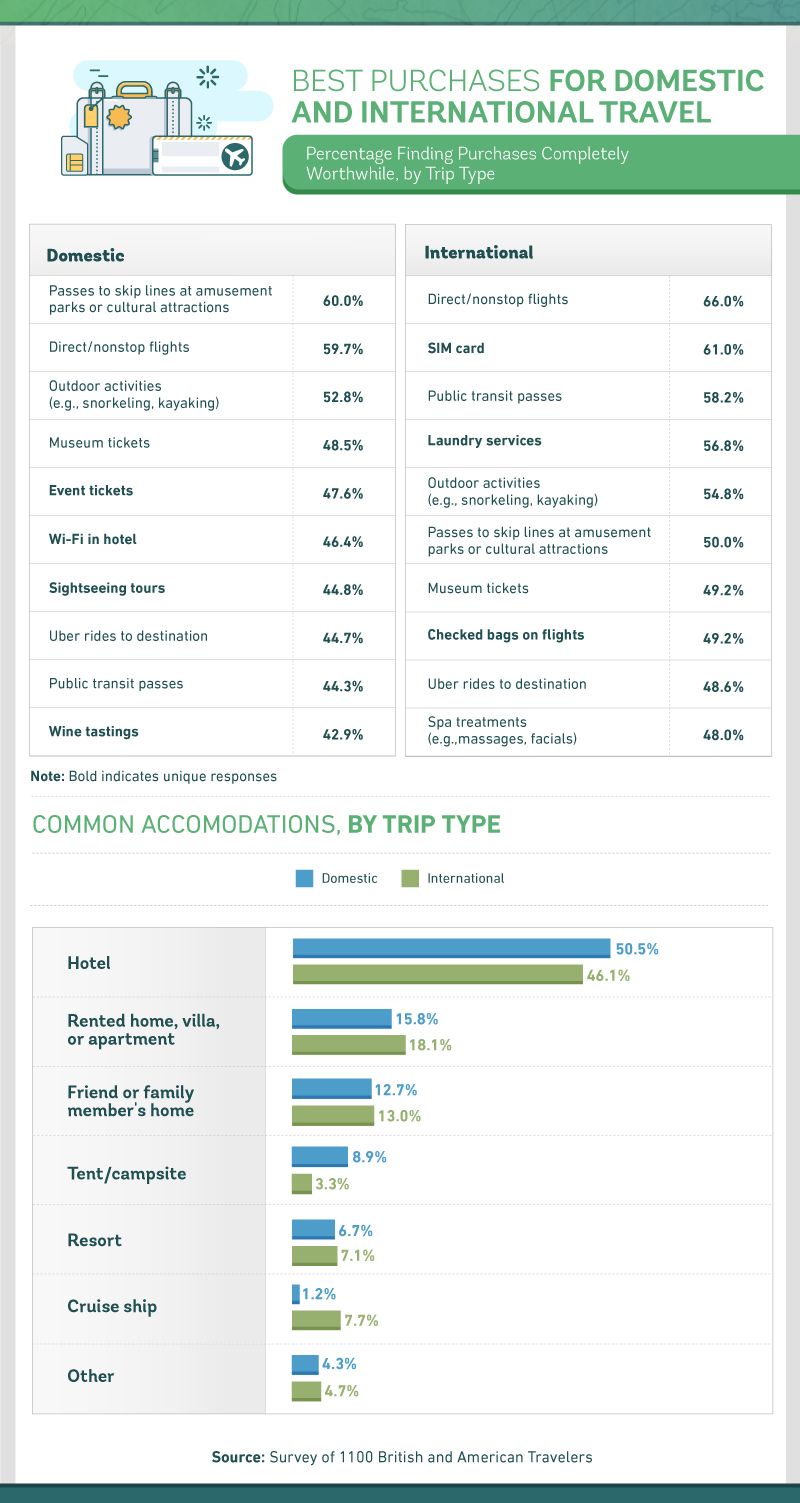 Domestic and international trips are two very different animals. There are a lot of things to consider when traveling internationally that we don’t have to think about when traveling domestically, and the things we want to spend money on are likely a lot different depending on where we’re going.

For domestic travelers, passes to skip lines in amusement parks and cultural attractions were more important than they were for international travelers. It might be that those who choose to vacation within their own country are willing to pay more to make the most of their time; after all, domestic travelers are often spending less on travel than those who vacation internationally.

Whether traveling domestically or internationally, the majority of travelers agreed that direct flights were worth the extra cost. This is probably especially true for U.S. residents, who frequently use planes for domestic travel, whereas U.K. residents often use trains.

Making the Most of Extended Stays

We also found that purchase habits looked different depending on the length of the trip. For trips of four or more weeks,laundry services were popular for those who were trying to travel lightly. Hotel Wi-Fi was also a popular purchase on longer trips; after all, people can survive a week or two without a constant connection, but it’s much harder to go a month without reliable internet access, especially for those who need to get work done.

When we travel, we have plenty of freedom in deciding where our money goes. Flights, food, and housing come in all shapes and prices depending on what we want to get out of our trips. Our purchase choices are often shaped by the length of our trips, especially since we often want to recreate the comforts of home while settling into a new locale.

A popular destination among Europeans is luxurious Dubai in the United Arab Emirates. Whether guests are shopping, staying at opulent resorts, or racing in a Ferrari or Lamborghini, the area is known for its sunny weather and gorgeous beaches – especially with residents of the U.K. The city’s bling factor makes everyone splurge a little, even those who usually try to stay within their allocated vacation budget.

If you’re planning an extended journey to the UAE for either business or vacation, Bayut can help you find the perfect home no matter how long you plan to stay. We have the largest selection of luxurious apartments, homes, and villas available for rent on a weekly, monthly, or yearly basis. Visit us at Bayut.com today and see what your next trip could have in store.

For this study, we surveyed 1,100 people who’d traveled in the last five years. 563 respondents were from the United Kingdom and were recruited to the study using Prolific. 537 respondents were from the United States and were surveyed using Amazon’s Mechanical Turk. Ages ranged from 18 to 80 with an average of 35.7 and a standard deviation of 11.1.

All cost data from British respondents were converted to U.S. dollars based on exchange rates around November 23, 2018. Cost amounts were based on purchases made by participants on their most recent travels. Then, outliers were removed, and costs were averaged.

Cost data outliers greater than three times the standard deviation plus the mean were not included in this analysis.

All purchase options with fewer than 26 respondents were not included in this analysis. This study was not exhaustive of all possible travel-related purchases. The data were neither weighted nor statistically tested.

Much of the information in this study relies on respondents’ self-reported answers. There are issues with this type of data. Some issues include forgetfulness, incorrect recollection of past experiences, exaggeration, or underrepresentation, among others. This content is based on means and is only exploratory.

Know anyone who loves travel – and also loves to make the most of their money? Please share this article with friends and family as long as it’s for a noncommercial purpose. If you share, please link back to this page.

All about the restaurants in Burj Khalifa