Should You Invest in Sharjah Real Estate this Year?

Quick Tips: If you’re planning to invest in Sharjah real estate, now is the right time. Throughout 2017, prices of property have dropped across the UAE. In Sharjah in particular, it is 11% cheaper to buy a three-bedroom apartment in 2017, compared to the second half of last year.

With the emirate’s ever-growing population and the popularity of single room rentals as well as house sharing, investing in a three-bedroom Sharjah apartment is considered a shrewd move for investors. The same can be said of home seekers  – especially considering the emirate’s planned advancements in infrastructure and diversification of the economy.

IF YOU ARE AN INVESTOR

Sharjah is an industrial emirate set along the northern border of Dubai. It is a major economic and trade hub of the UAE. Interestingly, the cost of the industrial interest in Sharjah is 35pc lower, compared to other emirates. Similarly, acquiring a property there has always been a cheaper endeavour in comparison to capital deployment in the flashier Dubai and Abu Dhabi. Since 2014, expatriates from any country holding a UAE residency visa are permitted to buy property in Sharjah, under leases of up to 100 years. 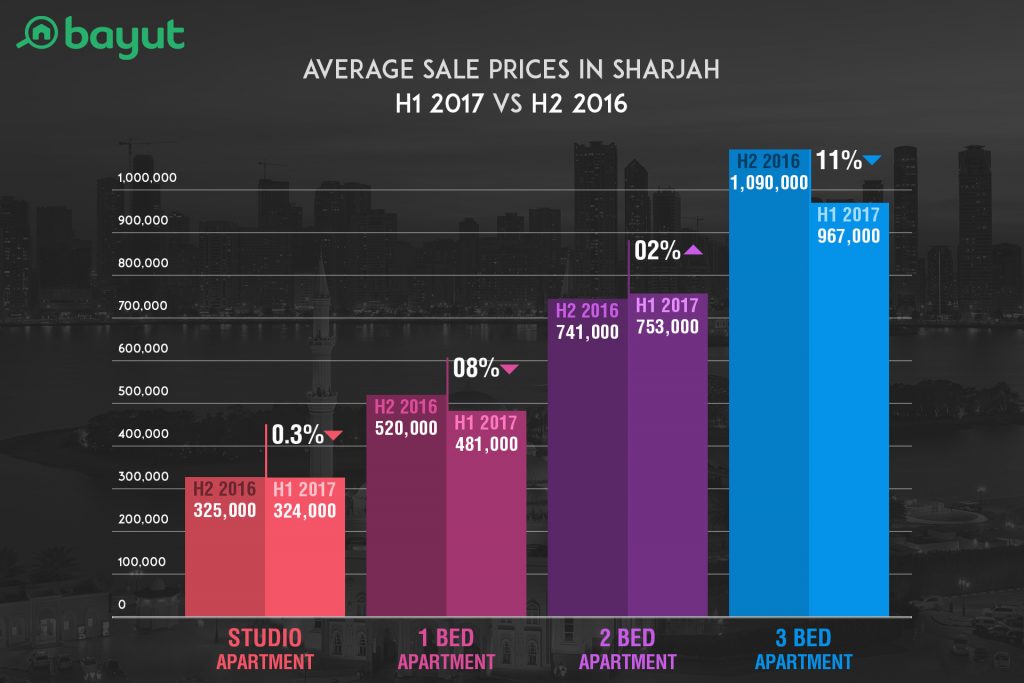 As the above infographic demonstrates, prices of apartments in Sharjah have fallen across all property types this year. While some of the decreases are less significant (the 0.3pc downturn in studio apartments), it is 120K cheaper on average to buy a  three-bedroom apartment in Sharjah in 2017, in comparison to last year. The news should be of relevance to sophisticated investors looking for steady rental gains as the said type of property also achieves excellent returns on investment.

As per Bayut’s Data Team, the average return on investment for three-bedroom units has gone up from 7.1% last year, to a whopping 7.6% this year. Furthermore, Bayut’s data shows that the average ROI for three-bedroom flats in Sharjah is currently 2% higher, compared to rental returns on the same type of property in Dubai. Also notable is the 0.3pc increase on returns on investment on one-bedroom apartments, to a solid 6.6pc ROI.

Moreover, the population of Sharjah, as well as the demand for affordable rentals in the emirate, is steadily growing. According to the website UAEpopulation2017.com, the citizenry of Sharjah emirate has increased by approximately 0.21 million in the past five years – from 1.2 million people in 2012 to 1.452 million nowadays roughly. More and more people are looking to rent in Sharjah every year, whether they work in the emirate or Dubai. Obviously, the growth in population promises a stable turnover of lessees.

IF YOU ARE A HOME SEEKER

Sharjah is not only a business hub – it is the ideal city in the UAE for families looking for affordable accommodation or a home in a less hectic environment. The prices of apartments in Sharjah has always been considerably lower than the cost of the same types of properties in Dubai. 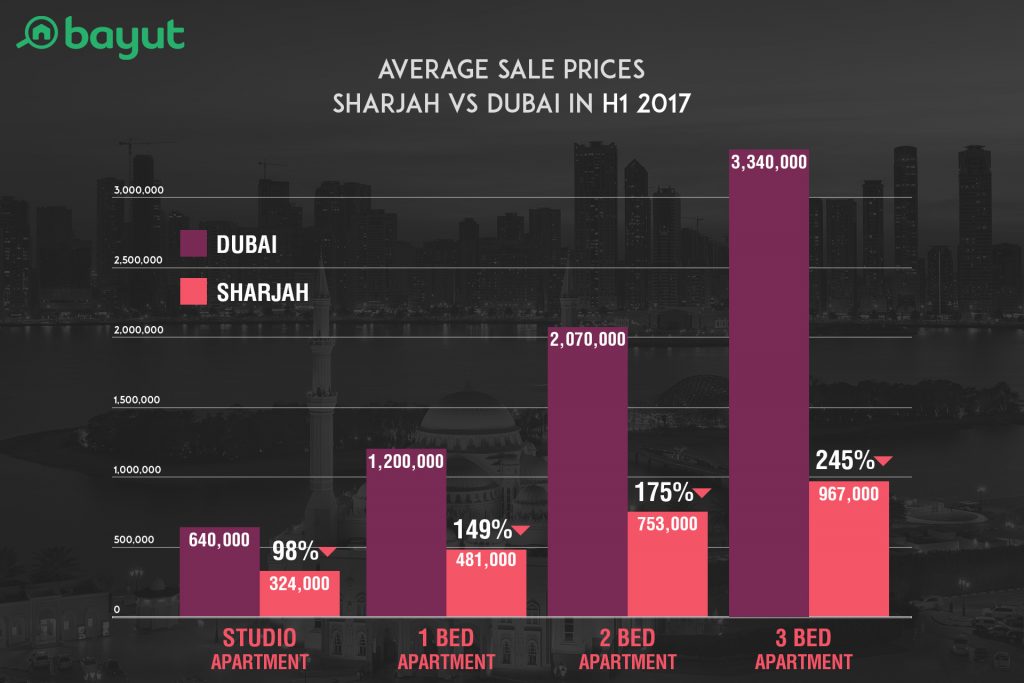 As the above graph shows, a three-bedroom unit in Sharjah is 245% more affordable on average than the same type of unit in Dubai. Similarly, you can buy two two-bedroom apartments in Sharjah for the price of one two-bedroom unit in Dubai. The price difference between the two emirates regarding one-bedroom apartments and studios are equally encouraging.

Furthermore, Sharjah has a well thought-out transportation and communications network that makes the commute to Dubai easy, albeit time-consuming. Structures such as the Sharjah Heritage Museum, Sharjah Calligraphy Museum, Heart of Sharjah and Al Hisn Fort Museum are all excellent reminiscences of the UAE’s past.

Schools like Victoria International and International School of Choueifat are there to ensure parents don’t worry about their children’s progress. The emirate doesn’t lack in medical care either, with facilities such as Al Zahra Hospital, Medcare Hospital Sharjah, Sharjah Corniche Hospital, et cetera. Moreover, Sharjah does offer a plethora of parks, creeks, recreational facilities, eateries, cinemas, and more – at lower prices, compared to Dubai.

BAYUT REVEALS THE MOST IN-DEMAND NEIGHBOURHOOD OF SHARJAH:

According to Bayut’s Data Team, 2017 sees the following area as the number one most popular district of Sharjah on our website:

The Al Majaz neighbourhood takes over 230,000 square metres. There are both commercial and residential buildings encircled on both sides. It is a beautiful and lively waterfront community with two major landmarks: Al Nakheel oasis and the Al Noor mosque. The area is divided three sub-areas – Al Majaz 1, Al Majaz 3 and Al Majaz 3, each one with its pros and cons, so make sure to do your research when browsing properties for sale in Al Majaz.

With the consistent increase in Sharjah population and further plans for advancement on the part of the Sharjah Government, as well as UAE’s ever-increasing tourist appeal, Sharjah real estate has plenty of investment and living potential.

Whether you’re an investor or home seeker looking to buy an affordable home in the quieter emirate 30-minutes away from Dubai, Bayut recommends buying a three-bedroom apartment with good ROI in Al Majaaz. Alternatively, look for three-bedroom flats or one-bedroom flats in other in-demand communities, such as Al Nahda, Muweileh, Al Khan and Al Mamzar.