Bayut.com has unique access to property listings and user search trends across all sectors of the UAE property market, from rent to sale, residential to commercial. While we have already covered the market trends for residential property, today Bayut is focusing on commercial property in the UAE, specifically revealing how the office rent and sales have fared over the past 12 months in Dubai and Abu Dhabi, from the most popular areas to how the prices compare to the same period from the previous year.

Business Bay offices for rent are the most Popular in Dubai 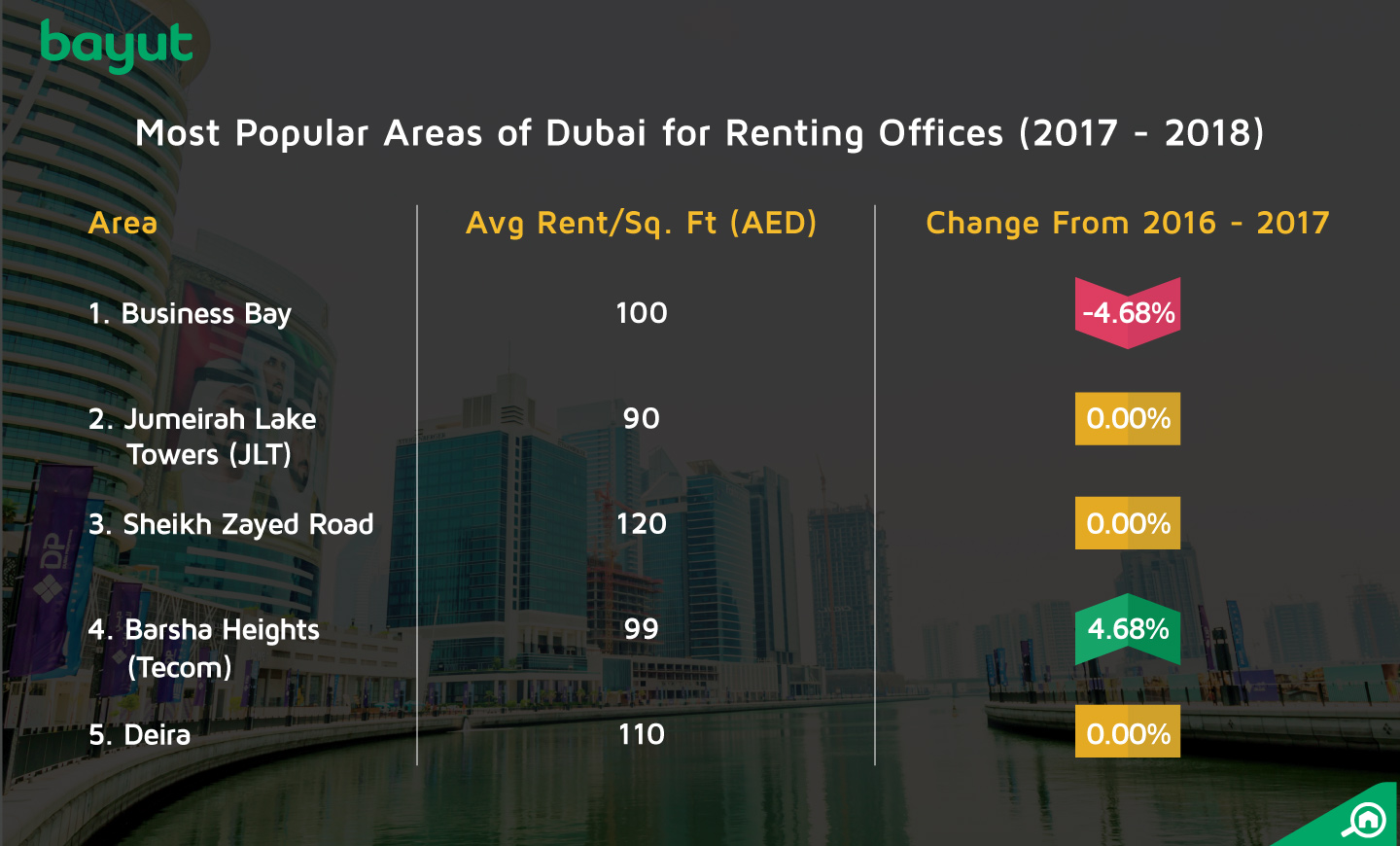 Offices in Business Bay proved to be the most popular for those looking to rent work space in Dubai. The last few years have seen the area become reinvigorated with an influx not only of office buildings but of conveniences such as supermarkets, restaurants cafes and more – perfect for the professional on the go! Office rent in the area is an average of AED 100 / sq. ft, which is nearly 5% cheaper than in 2016 to 2017.

Coming in second of the most-searched-for areas for renting offices in Dubai on Bayut.com is Jumeirah Lake Towers or JLT. This mixed-use and well-connected development (two metro stations serving the area) saw office rent at an average of AED 90/sq. ft, posting no change from the previous year – similar to Sheikh Zayed Road that at AED 120/sq.ft also showed no increase or decrease in average annual workplace rent.

Barsha Heights offices for rent, however, posted an increase in price of nearly 5%, leasing for an average of AED 99/sq. ft. Rounding off the list of most popular areas for renting offices in Dubai is Deira. This old Dubai neighbourhood also enjoyed stable rents in 2017-2018 at AED 110/sq. ft. 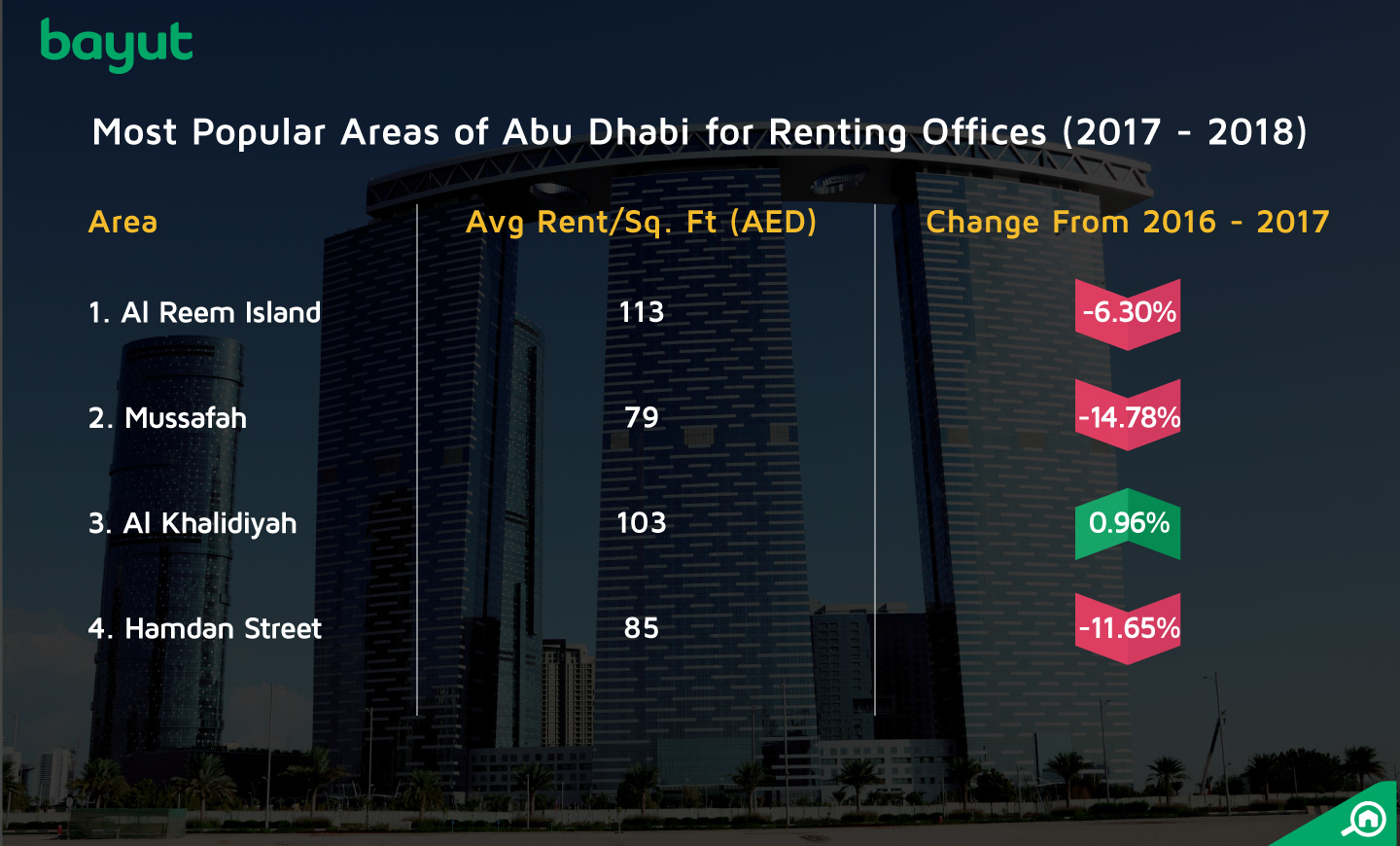 The next most searched for area for renting offices in Abu Dhabi on Bayut.com is Mussafah. Office spaces in Mussafah are also the most affordable of the popular areas at AED 79/sq.ft – a decline in office rent of just under 15% compared to 2016 to 2017. Coming in next are Al Khalidiyah offices where prices rose slightly by less than 1% to AED 103/sq. ft, followed by Hamdan Street that also saw a decline. Offices here dropped by 11.65% in average asking rent per square foot to end at AED 84/sq. ft. 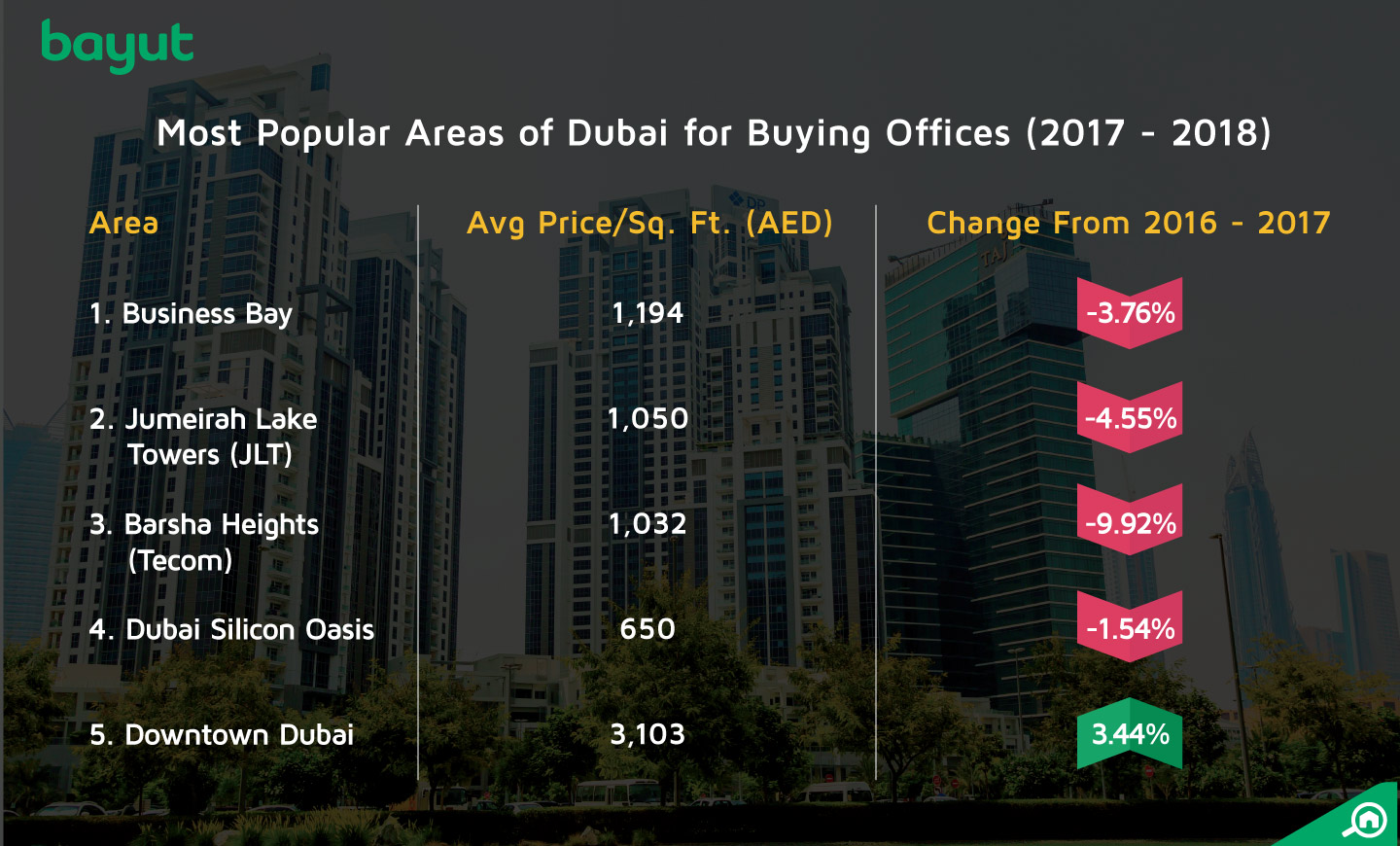 On the other side of the property market, namely, sales, Business Bay offices were the most searched on Bayut.com, where prices dropped by just under 4% to AED 1,94/sq. ft.

If you were interested in buying offices in Dubai, the average asking price per square feet also dropped in the next three most popular areas from between 1.5% to 10%. This translates to an average asking price per square foot of AED 1,050 and AED 1,032 for JLT and Barsha Heights offices respectively; while the most affordable area on the list is Dubai Silicon Oasis with an average sale price of AED 650/ sq. ft.

Rounding off the list of most popular areas were users looking to buy offices in Downtown Dubai, which posted the only increase in asking price of the top 5 areas (and is also the most expensive areas) by 3.44% to AED 3,102/sq. ft.

Commercial property renters and investors are sure to be buoyed by the market trends observed over the past 12 months, with relatively stable prices across the board.

Disclaimer: The above report is based on prices advertised by real estate agencies on behalf of their clients on Bayut.com from January 2016 to January 2017 and February 2017 to February 2018, and not representative of actual real estate transactions conducted in Abu Dhabi and Dubai.