Bayut.com is committed to helping you make smart real estate decisions, based on accurate data directly from thousands of listings on our website. Each month, we will give you a short recap of the average prices posted by the top 5 most searched for areas regarding Dubai property, for both rent and sale, as per the ever-changing trends seen on a monthly basis.

dubai marina remains the most popular area for apartment renters 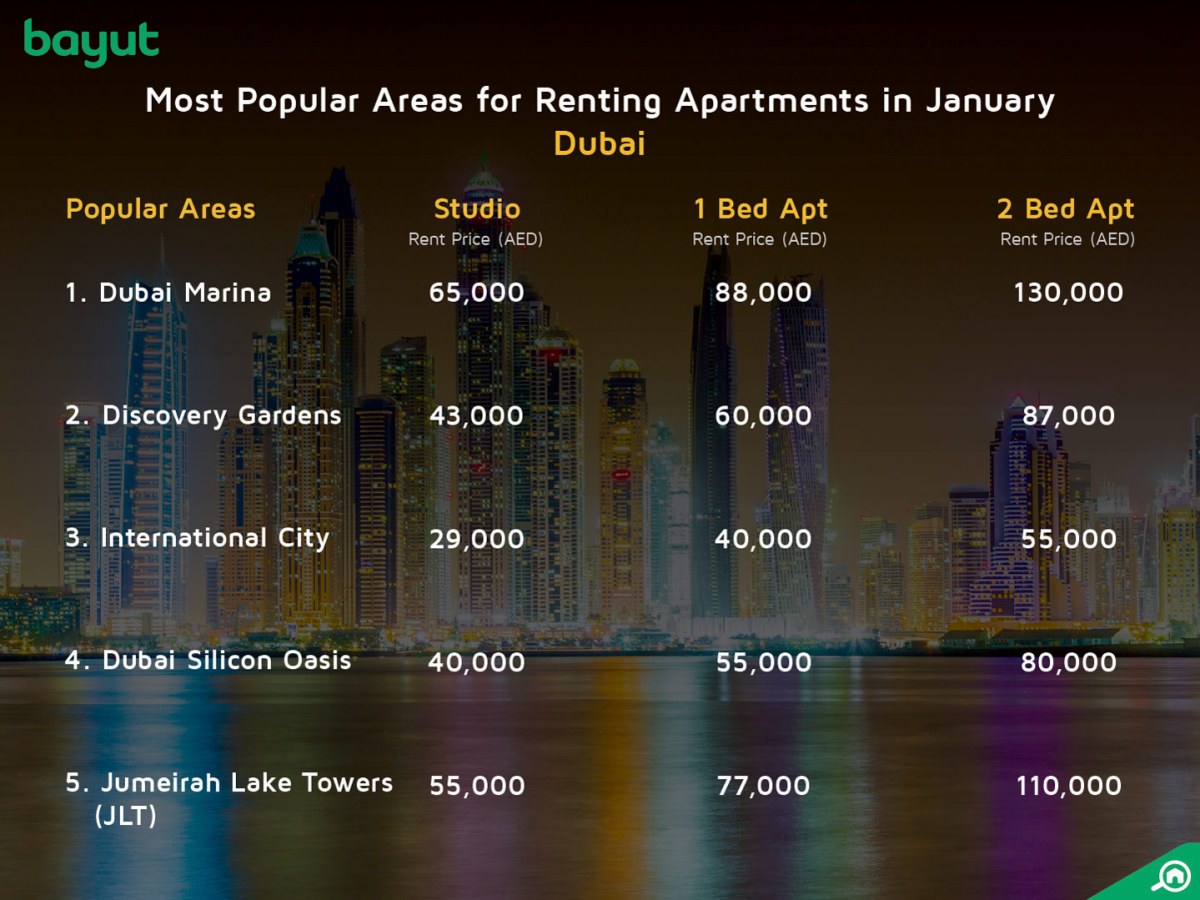 January 2018 saw apartments in Dubai Marina attain top spot in terms of popularity, as per overall 2017 market data, posting average asking rents of AED 65k for studios, AED 88k for a 1 bedroom and AED 130k for a 2-bed flat.

The other localities that rounded off the top 5 list when it came to popular apartments for rent in Dubai were the more affordable neighbourhoods of Discovery Gardens, International City and the up and coming Dubai Silicon Oasis, followed by the more established Jumeirah Lake Towers (JLT).

Discovery Gardens’ studios commanded an average annual rent of AED 43k, while 1-bed apartments here asked for AED 60k, followed by AED 87k for a 2-bed. Dubai Silicon Oasis, on the other hand, was not far behind in terms of asking rent. Studios, 1 and 2 beds in this neighbourhood were listed for average annual rents of AED 40k, AED 55k and AED 80k, respectively.

Predictably, the most affordable neighbourhood in the most popular areas list was International City. As per data from January 2018, renters could expect to pay a modest AED 29k per year for a studio, AED 40k for a 1-bed and AED 55k for a 2-bed. 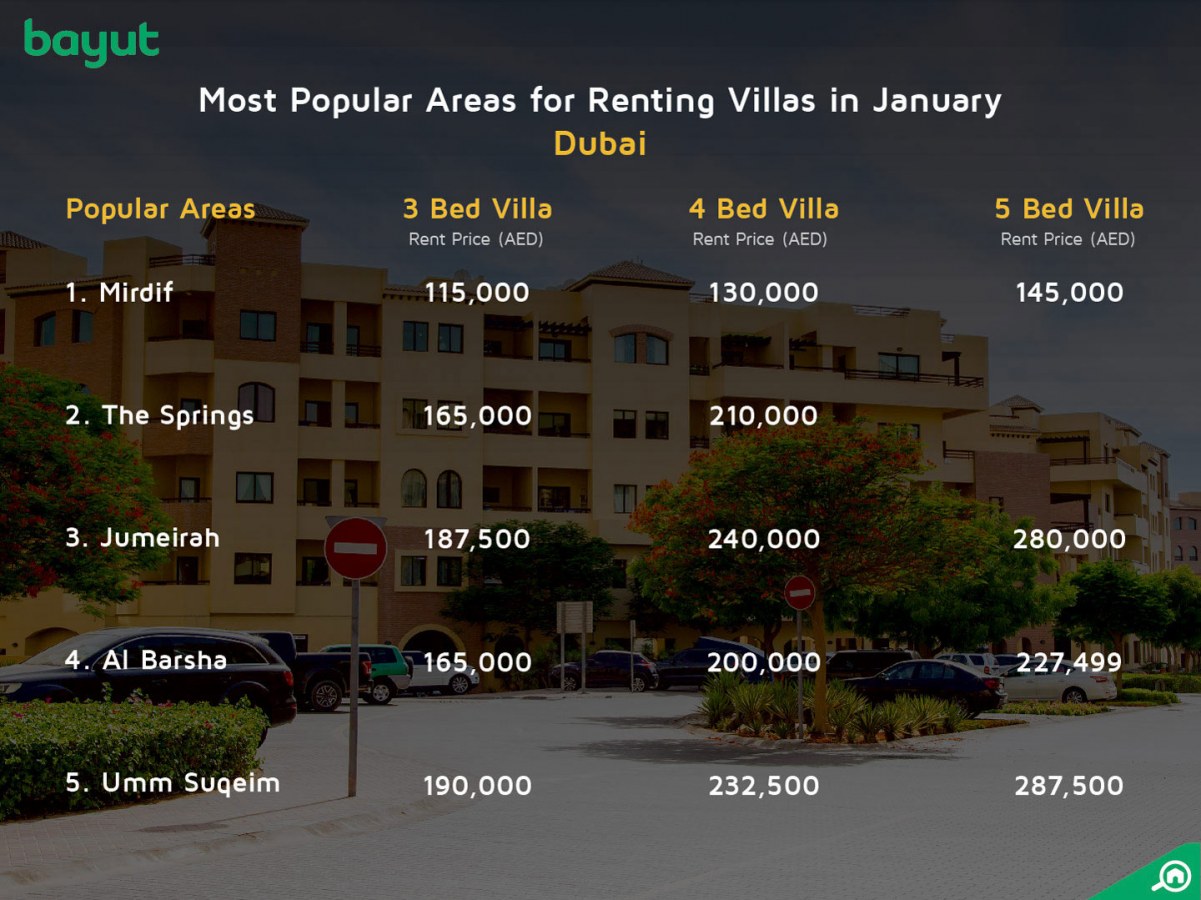 The remaining areas that appear on the most-searched-for list for villa rentals are the usual suspects of The Springs, Jumeirah, Al Barsha and Umm Suqeim. Similar to the trend seen in Mirdif’s villas, prices also dropped slightly across these areas, save for Umm Suqeim where rents for 4 and 5 beds increased slightly compared to the average price in 2017 (by AED 2.5k and AED 7.5k respectively) and; 4 bed villas in The Springs where the average asking rent increased by AED 20k. The most significant drop in average asking rent can be seen in 5-bedroom villas in Al Barsha. With an average annual rent of AED 227.5k in January 2018, this represents a decrease of AED 22.5k compared to 2017. 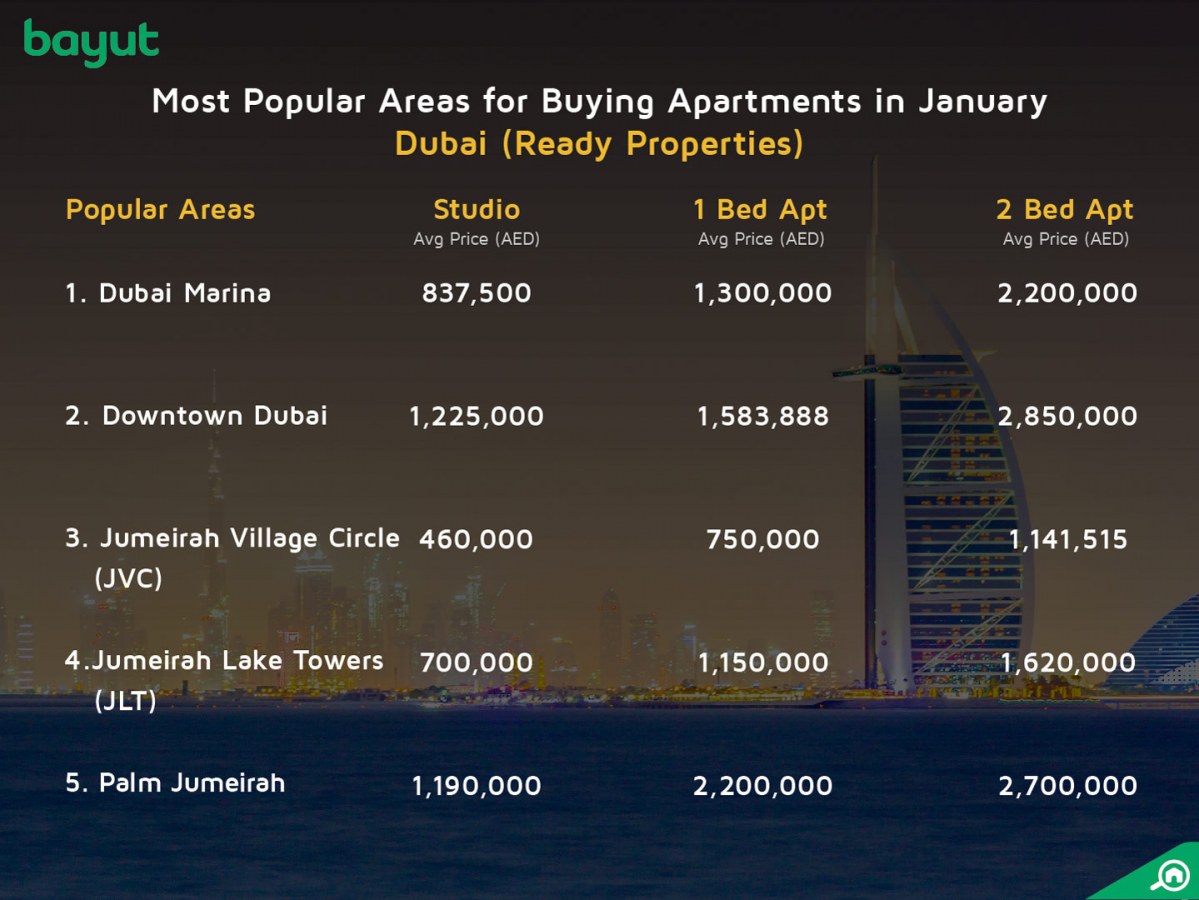 Investors interested in flats appeared to be looking at the same areas as in 2017, namely Dubai Marina, Downtown Dubai, Jumeirah Village Circle (JVC), Jumeirah Lake Towers (JLT) and Palm Jumeirah, in that order.

Buyers who were looking at buying flats in January 2018 also shelled out slightly less than in 2017, with a few exceptions. Studio apartments in Downtown Dubai saw studios be listed at AED 1.2M, 1-beds at AED 1.58M and 2-beds at AED 2.85M.  Meanwhile, the cost of 2 bedroom apartments was the same as in 2017 in Dubai Marina, Downtown Dubai and JVC. Predictably, the fifth most popular area, Palm Jumeirah was the priciest of the top areas, with studios selling for an average of AED 1.19M, 1-beds going for AED 2.2M and 2-beds at AED 2.7M.

The lower asking price for rent and sale in apartments has caused the expected ROI for apartments to also dip marginally in January 2018 to 6.54% from 6.82% in 2017. 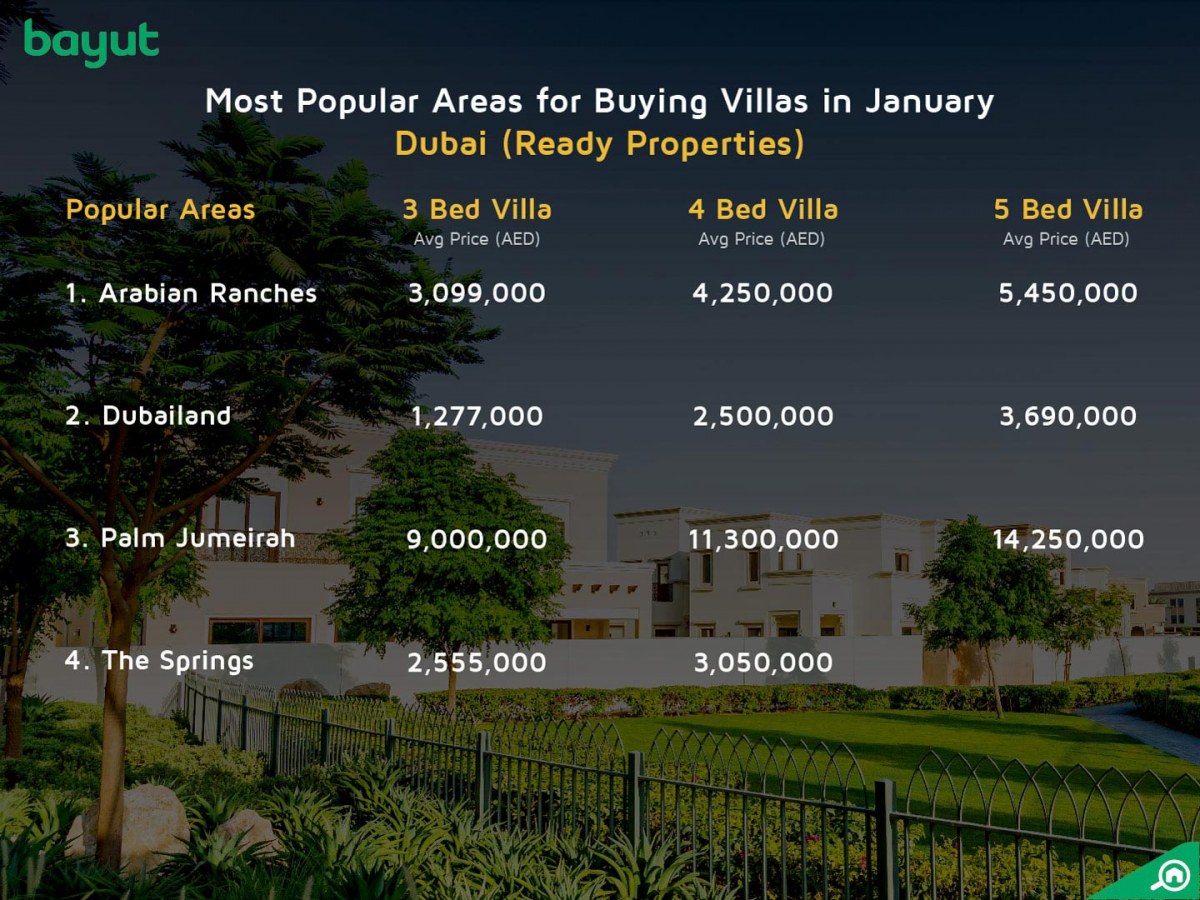 Regarding Dubai villas for sale, the area that came out on top in January 2018 was Arabian Ranches, reflecting the search trend across 2017 as well. Compared to the overall price in 2017, sale prices in this neighbourhood saw 3-bed properties going for an average of AED 3.1M, 4 for AED 4.25M and 5 for AED 5.45M in the first month of 2018.

The remaining neighbourhoods in the most searched for areas as per Bayut.com were Dubailand, Palm Jumeirah and The Springs – the same as what was seen in 2017, albeit in a different order. Meanwhile, 3 bedroom villas on the Palm saw an increase in asking price to AED 9M.

When looking at the top 5 areas in comparison to 2017, the sharp decline of average villa sale prices in Dubai in some areas has caused the expected ROI to rise slightly to 5.27 %, from 5.04% in 2017.

The first month of the year reflects the trends seen in 2017, with rent and sale prices continuing to soften across the majority of popular areas. While many commentators were eager to see how the introduction of VAT would affect the primary market, it is still too early to gauge the financial impact of the tax. This is because of the new projects launched after 1 January, none have actually passed on the VAT to buyers in an overt way – the new launches are also located in expectedly expensive areas as well, such as Emirates Hills. As the months roll on and more properties enter the secondary rental market, we expect to see rents continue to fall.

Disclaimer: The above report is based on prices advertised by real estate agencies on behalf of their clients on Bayut.com, and not representative of actual real estate transactions conducted in Dubai.

The State of Real Estate: Highlights from Bayut’s Second Webinar