The UAE real estate market appears to be becoming attractive for both end-users and renters looking for well-priced properties. With the addition of new units over the past few months, the market is becoming more affordable for both buyers and renters.

As a number of units in the pipeline are gradually making their way into the market, renters are generally happy. The market is supplying more bargains and some landlords are willing to negotiate on rent. However, the average return on investment (ROI) is still an impressive 6%, outperforming real estate investments in comparable cities.

The average price for a studio apartment remained steady at AED 667,000 returning an impressive rental yield of 7.95% to owners. Suburban localities offered a rental ROI of well above 9%, with Dubai Silicon Oasis, Dubai Sports City, Arjan and International City providing the best returns.

The average rent for 1-bedroom apartments was down 3% from the previous month and was recorded at AED 87,000. Interestingly, the sale price for apartments increased 4% from AED 1.27 million in January to AED 1.32 million in February. Average rental yields topped out at 6.6%. Two-bed units in the emirate commanded an average rent of AED 137,000 in February. Selling for a mean price of AED 2.25 million, the units gave owners a rental return of 6.1% per annum.

The average sale price of a 3-bed apartment in Dubai shed 2% of its January value to land at the AED 3.5 million mark in February. The rental ROI for 3-bed units averaged 5.37%. There was a similar 2% drop in the average rent for 3-bed apartments, the value recorded at AED 188,000 in the outgoing month. The average rent for the 4+ bed category remained AED 314,000 in February, while the rental yield was recorded at 4%.

In Dubai, the changes in values have been more pronounced in areas in or close to the city centre, as a newer lot of quality structures keep pulling tenants and buyers out to the city’s suburbs. This is a positive development. There will be an easing of pressure in central areas like Dubai Marina, Deira and JLT that have borne the brunt of the expat demand for long and the little remaining inflationary effect on prices and rental values will also likely be phased out. On the other hand, the move to the suburbs will not only see the residents’ number rising in other parts of the city, but quality and amenity-laced structures will benefit the occupants immensely by providing more value for each dirham spent on housing costs – a win-win for everyone. 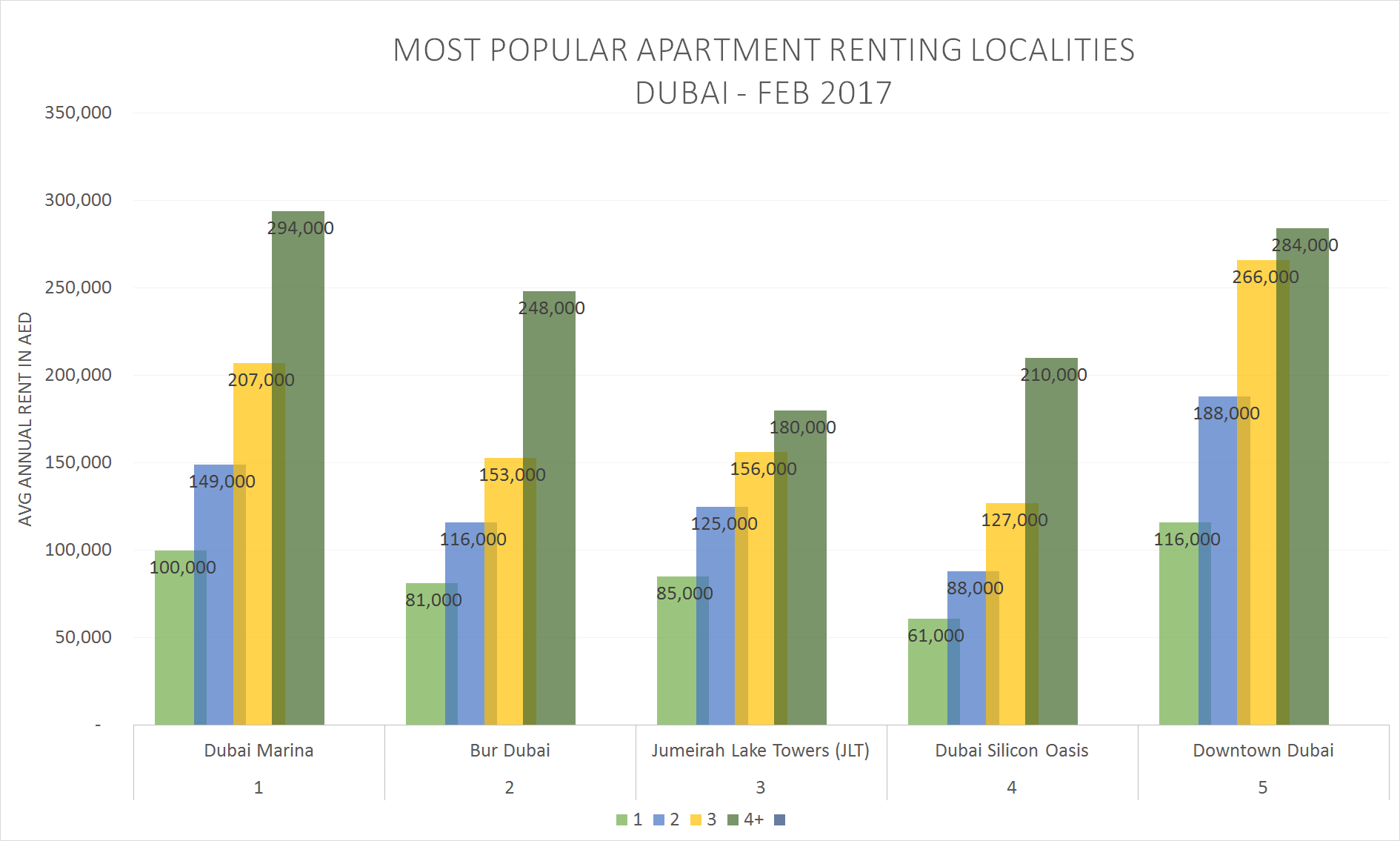 While rents in Dubai mostly held their ground, values came down noticeably in Abu Dhabi. An overall adjustment of 8% meant the average ROI for rental apartments also dropped to 6.1%. The greatest downward movement was observed in rental rates of studio units. Average rent for studio apartments was recorded at AED 44,000 in February, down 8% from the January average of AED 48,000. The rental yield for the category was 6% in the outgoing month. 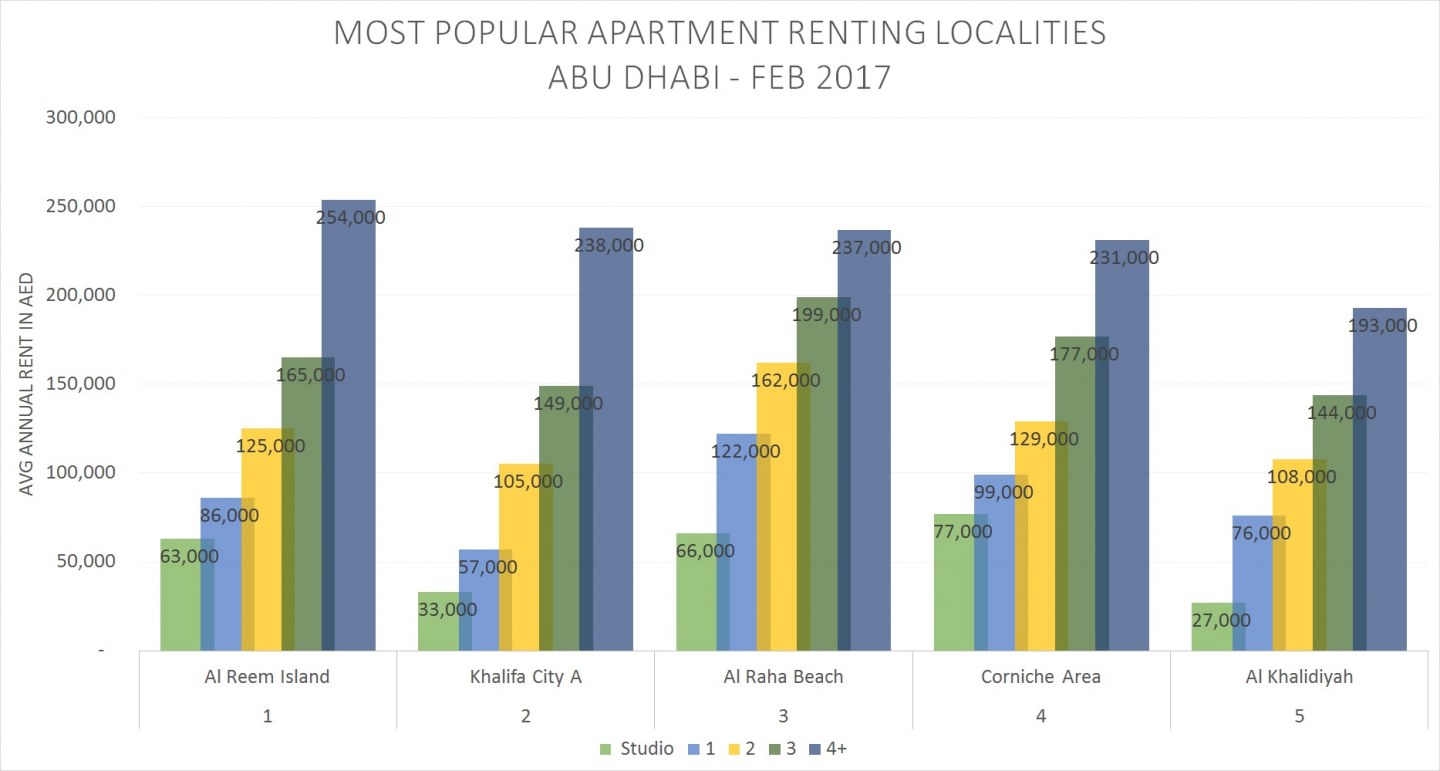 Considering the global headwinds most economies are braving, and the effect on liquidity as a result of the ongoing oil price crunch, the performance of real estate markets in the two main cities of UAE appears satisfactory. While many regional realty markets remain in a nosedive, Dubai and Abu Dhabi have held their positions well.

In markets directed by demand and supply, price adjustments are a natural phenomenon and should not be a cause for concern. The massive infrastructure expenditure planned in relation to the Expo 2020 is yet to gather momentum and push real estate activity into top gear. And that might be one reason many players are still observing the market from the sidelines, resulting in a reduction of demand, and subsequently, prices.

Visit these petting zoos in Dubai for your next family outing

Types of business licences in Dubai