UAE capital Abu Dhabi is a prominent destination on the MENA region map whether you are considering key economic sectors such as trade, manufacturing, financial services and ports and shipping, or having thoughts of high speed auto races, pristine beaches and luxury getaways. Thanks to its standing as a key business and leisure hub in the region, property renting in Abu Dhabi continues the year round, with many world-renowned names choosing the city as the base for expansion across the region. Keeping up with its tradition of enlightening readers about the capital’s real estate sector, Bayut.com presents its report on the localities that attracted most interest from people looking for rental spaces in Abu Dhabi during December 2016. 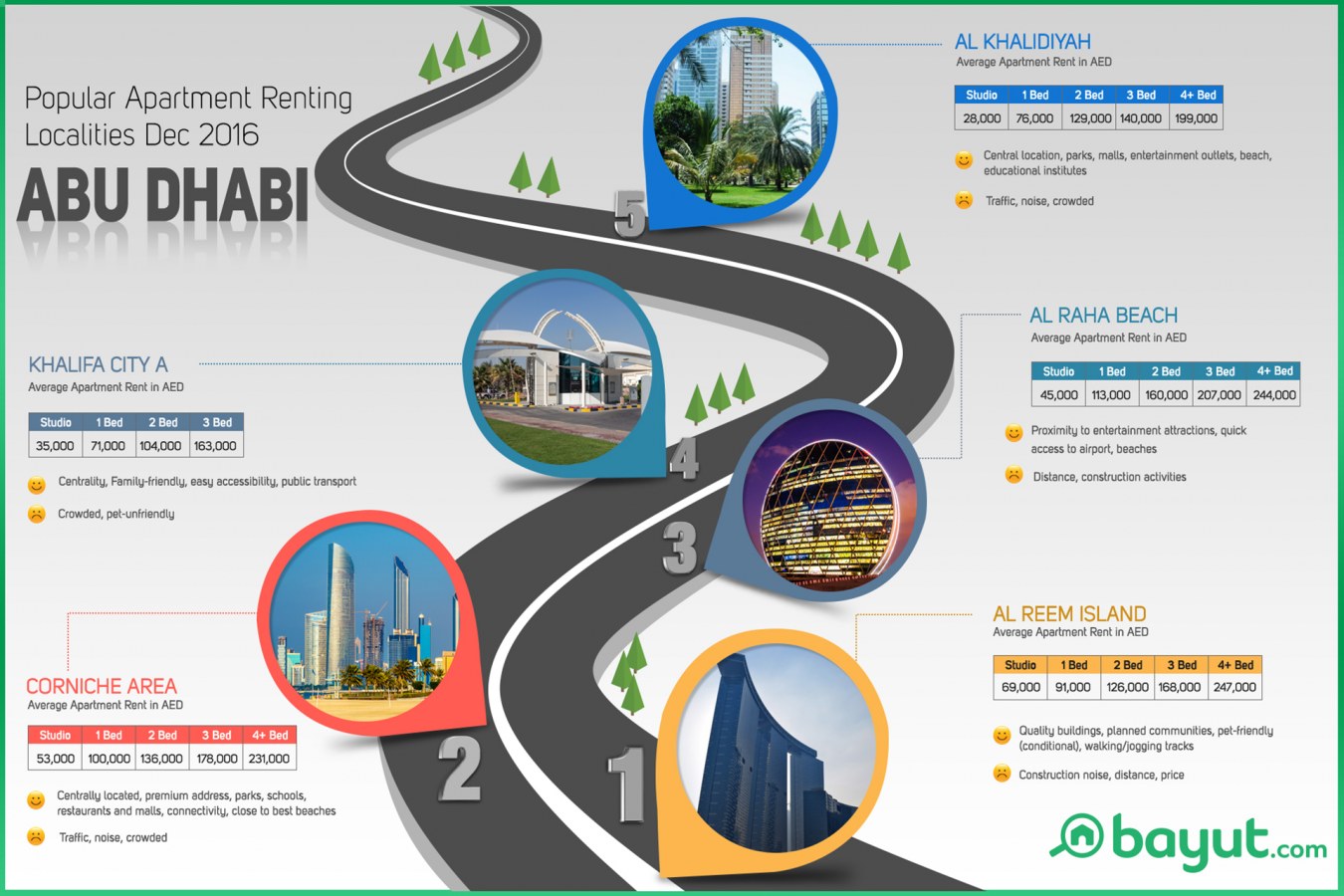 According to our findings, the locality where most people wanted to rent an apartment in Abu Dhabi December 2016 was Al Reem Island. Over the course of the month, 23% of all searches conducted on Bayut.com with regard to rental apartments went to Al Reem Island, cementing its positions as the most popular residential locality in the emirate. The area is comparable to Dubai Marina in terms of facilities and luxuries on offer, and spaces here are highly prized.

A distant second was Corniche Area that gathered a mere 9% of all searches for rental apartments. Apartments in Al Raha Beach area were on the third spot with 8% queries, while Khalifa City A took the fourth spot by garnering 7% of the searches on our site. The fifth position was claimed by Al Khalidiyah with a 6% share of queries.

Villas are an important residential category in the UAE capital and the most popular area for renting villas in Abu Dhabi in December 2016 was Khalifa City A that got a majority 27% share of the queries. The locality is densely populated and ideal for living with a family and kids thanks to a number of quality schools, parks, hospitals and malls.

The second most popular locality for renting villas was Mohammed Bin Zayed City, which accounted for 15% of all searches for rental villas in the outgoing month. The area is preferred by residents due to its centrality, proximity to key public and private installations and easy accessibility. Next we had Al Reef on the third spot with a 10% share of queries, while the fourth position was claimed by Al Raha Gardens, which took home 5% of search hits. The fifth most popular area for renting villas in Abu Dhabi in December was Khalifa City B, which made up 4% of all searches dedicated to rental villas.

Being a key trade and business hub of the region, office spaces in Abu Dhabi tend to remain hot properties. For the month of December 2016, the area that attracted most interest from people on the lookout for rental offices was the industrial town Mussafah. The area is a designated economic zone that has several key factories and is also very close to the port, making it grab the lion’s share (33%) of searches on our portal. The second most popular area was Al Reem Island, which received 23% of the searches on Bayut.com in December. It was followed by Al Muroor, Diplomatic Area and Al Khalidiyah, each of which received 5% of searches targeting rental office spaces in Abu Dhabi.