For a certain set of the ultra-rich, wealth knows no borders: Wherever the billionaire class lands its private jets, they’re always in the lap of luxury. For the rest of us, however, wealth is a relative concept, determined by geographical context.

From housing to household items, the cost of living varies enormously from country to country. Similarly, metrics related to the quality of life and purchasing power reveal vast international disparities. Could the average American make ends meet in the UAE? Could the typical U.S. family live like kings in Kazakhstan?

We set out to study how wealth and poverty are defined across the world, analyzing nuanced fiscal metrics from dozens of countries. Our findings show how fortunes vary internationally, and how you might fare financially if you moved abroad. Around the globe, where could you live comfortably – and where would you struggle with basic expenses? Keep reading to find out. 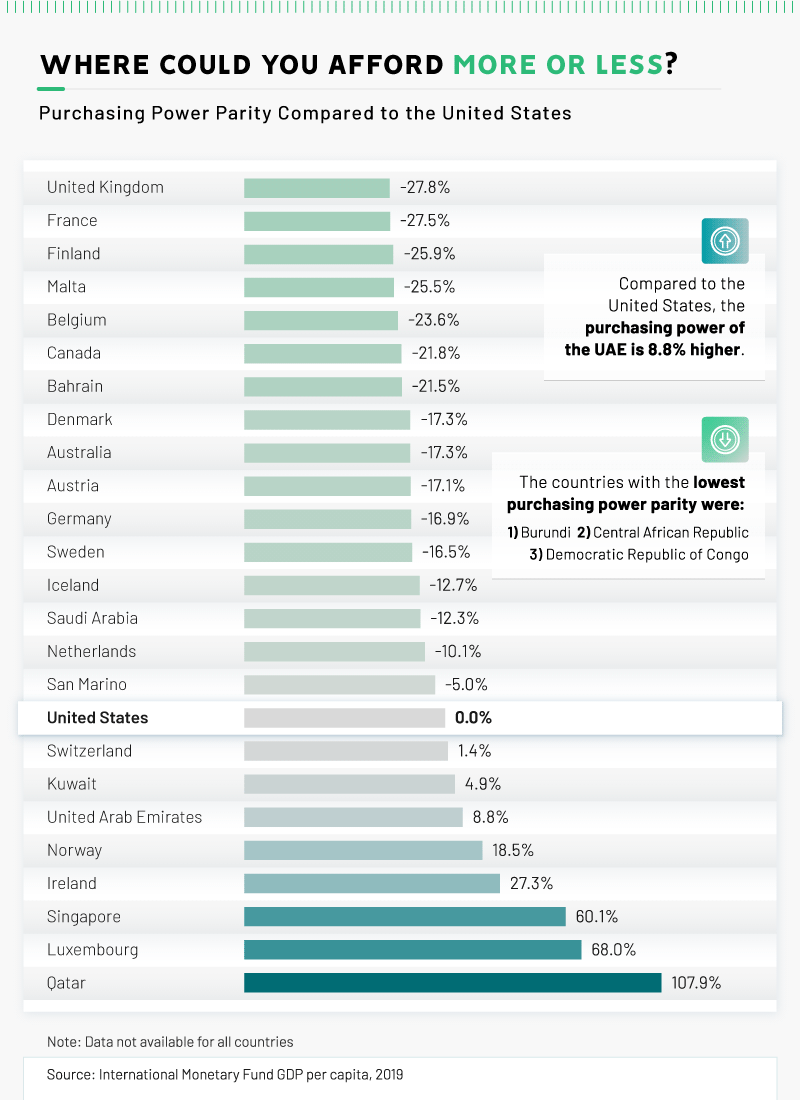 The first economic metric we considered was purchasing power parity (PPP), a complex calculation that helps us gauge the cost of goods and services from country to country. In basic terms, PPP helps us assess how items would be priced in each nation if all countries used the U.S. dollar. As a result, we can better understand how wealth might translate across international borders.

In our PPP ranking, the U.S. claimed the ninth spot worldwide, meaning Americans have an enviable degree of purchasing power on the global stage. But several nations significantly outstripped the U.S. in this regard. In the United Arab Emirates, for example, a resident making an average salary could buy 8.8% more in goods and services as the typical American shopping at home.

In nations with greater purchasing power, goods aren’t necessarily less expensive. Indeed, living in places such as Luxembourg and Switzerland can be exceedingly costly. But residents of these countries tend to have very high incomes as well, so their buying power in the marketplace is quite impressive. In other words, basic items are unlikely to break the average citizen’s budget, even if prices seem relatively high.

The opposite is true in some of the world’s most impoverished nations: Burundi, the Central African Republic, and the Democratic Republic of Congo had the least purchasing power. There is a precedent for swift economic improvement, however. From 1980 to 2019, China’s purchasing power surged 6,179% as the country entered a new era of widespread prosperity. 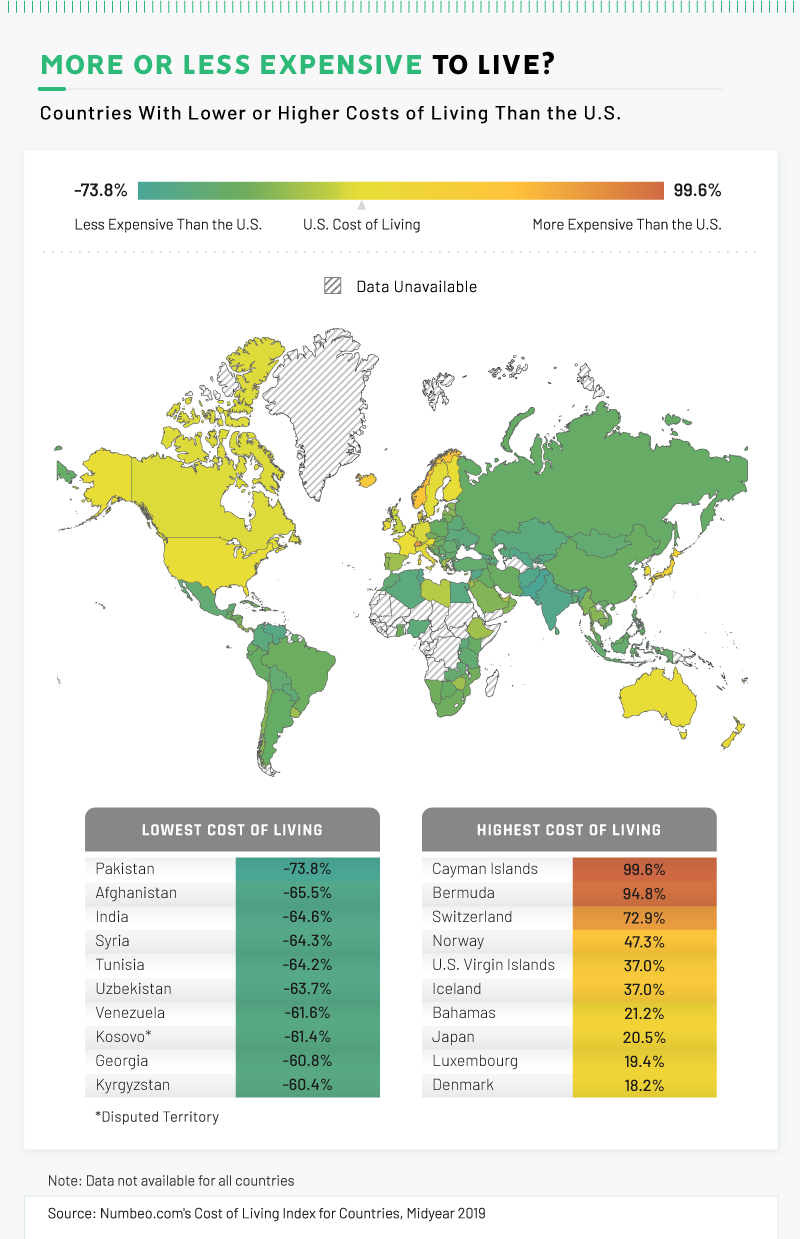 Regarding the cost of living, relatively few nations are more expensive than the U.S. With housing, education, and health care costs on the rise, living well in America requires a considerable income. Still, many nations do have higher average costs than the U.S., either because of their elite economies or their status as luxurious enclaves.

Several island havens for the wealthy boasted massive costs of living: The Cayman Islands, Bermuda, the U.S. Virgin Islands, and the Bahamas were all considerably more expensive than America. In these selective destinations, tourism and ultra-rich residents can propel price inflation, while basic necessities like groceries are expensive to import.

Several European nations also possessed sky-high living costs: Switzerland, for example, is home to two of the world’s priciest cities, Zurich and Geneva. Likewise, Japan and Singapore have some of the most exorbitant city living on earth.

Of course, many countries occupy the other end of the spectrum with shockingly cheap prices. South Asian countries, including Pakistan, Afghanistan, and India, were particularly affordable.

Around the world, do high costs of living always correspond to a high quality of life? In many cases, our findings suggest that the priciest nations get what they pay for. Australia, for example, ranked first for quality of life but had slightly higher living costs than the U.S. Expensive places like Switzerland and Japan also fared well in our quality of life rankings.

However, some nations boasted the best of both worlds: high quality of life and lower cost of living. Portugal was particularly attractive in this regard, making it a desirable retirement destination for Americans and other Europeans.

Additionally, as we all know well, the United Arab Emirates offers an enviable quality of life as well. Abu Dhabi and Dubai have earned particular attention for their stability and comfort in recent years.

At the other end of our rankings, many nations offered dramatically lower cost of living – but quite low quality of life metrics as well. Keep in mind, however, that foreigners with means can enjoy comforts that the average citizen of these nations cannot. In Vietnam, for example, it’s possible to live quite well on what most Americans would consider a modest retirement budget. 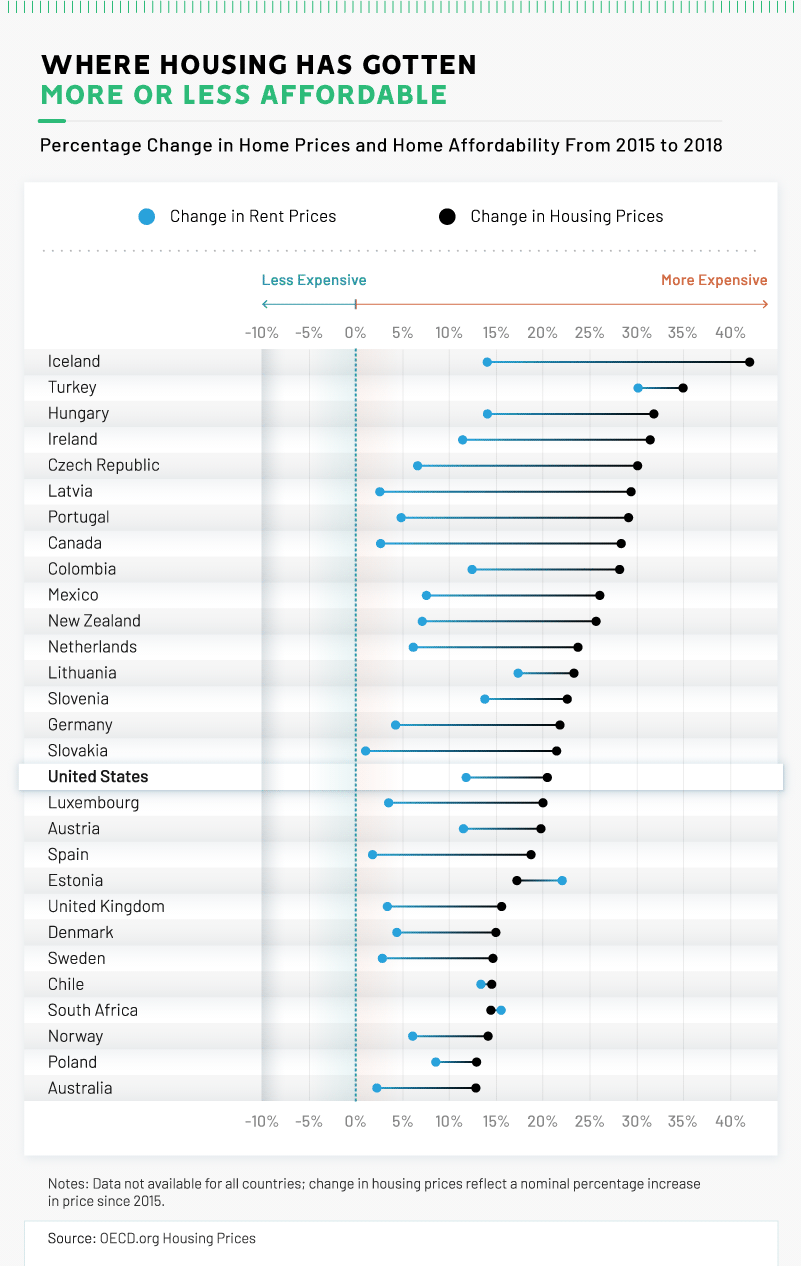 In the majority of countries, housing prices have risen in recent years, buoyed by a relatively healthy international economy. Exceptions to this rule were Italy and Greece, where local fiscal factors have prevented the real estate booms seen elsewhere in Europe. Russia has also seen housing prices decline since 2015, though the market has bounced back somewhat since reaching historic lows in 2017.

Some nations have experienced an astonishing surge in home prices: In Iceland, where prices grew more than 40 percent from 2015 to 2019, some experts fear that the real estate bubble will burst due to a glut of high-priced housing. In Turkey, where real estate prices have increased nearly as much, bubble warnings abound as well. Still, marked increases in home prices around the world indicate a vigorous global economy, rather than a handful of overheated markets.

Rents also increased worldwide, though typically to a lesser extent than home prices. If this dynamic continues, young people across the world could find themselves excluded from property ownership, a trend already unfolding in the U.S. and the U.K. Moreover, poor families could be excluded from the housing market entirely: Across Europe, rates of homelessness are quickly rising as rental costs soar. 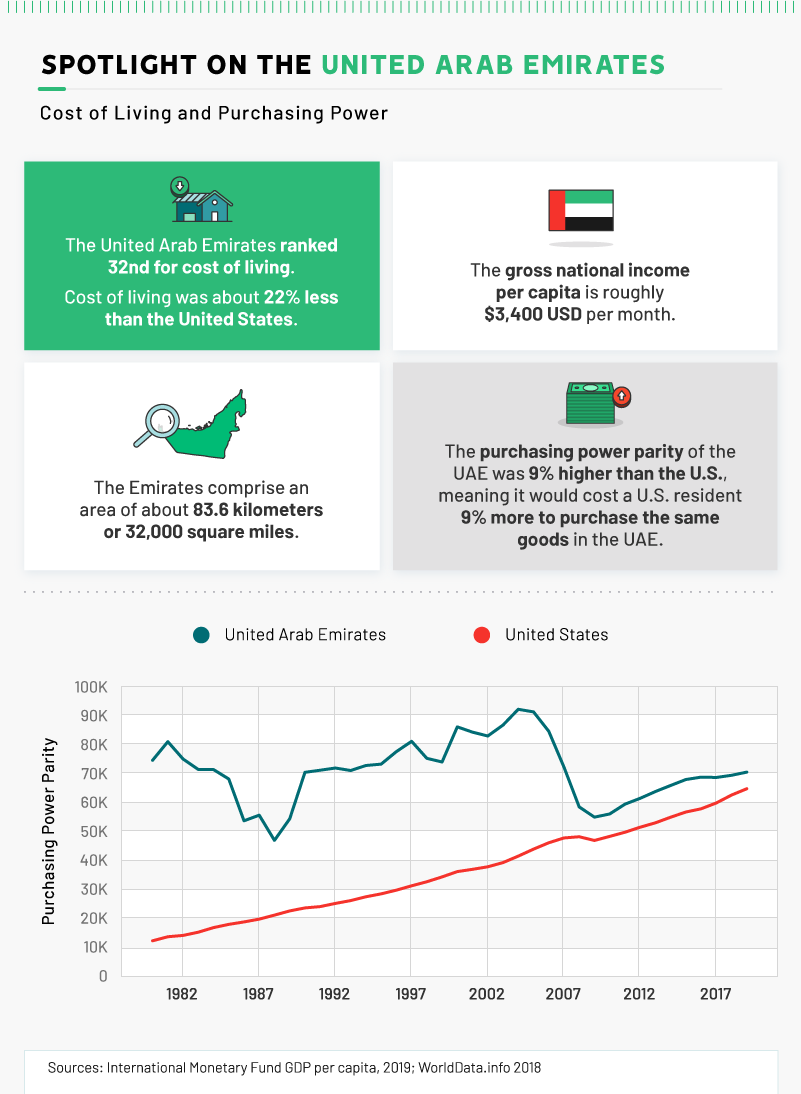 As the United Arab Emirates’ leading real estate portal, we took a particular interest in economic statistics pertaining to the UAE specifically. When foreigners consider a move to the UAE, they’re often surprised how far their money can go in one of the nation’s world-class cities.

Relative to the U.S., for example, the cost of living in the Emirates is more than 20% lower. True, living in Dubai or Abu Dhabi can get pricey: These cities regularly rank among the most expensive in the Middle East. But residents also tend to earn quite modest salaries, averaging about $3,400 a month. Accordingly, UAE residents enjoy greater purchasing power than Americans do, generally enabling them to live comfortably.

If you’re seriously contemplating a move to the UAE, check out our guide for expats moving to Dubai. From visa details to the rental market, we’ve got the entire process covered.

For those who reside in relatively wealthy countries, many of these statistics may seem daunting: Basic goods and services are far more affordable elsewhere, while housing prices are continually increasing at home. Would an international move be a prudent financial decision, allowing you to live luxuriously on a similar income?

Assuming you could maintain your current earnings, a move to another country might seem attractive. Before you grab your passport, however, consider which nations can provide the ideal mix of affordability, adventure, and stability. Which countries are relatively free of turmoil and welcoming to expatriates in pursuit of opportunity?

As the leading property portal in the United Arab Emirates, Bayut has helped hundreds of international families put down roots in the UAE. If you decide to call our nation home, we’ll help you find the ideal house or apartment. Explore our listings, and allow us to introduce you to a high quality of life at surprisingly low prices.

We collected data from various sources with information related to purchasing power parity, cost of living, quality of life, and housing affordability.

Data on the cost of living were collected from Numbeo. Data were collected on Aug. 9, 2019, and reflect data for 2019 midyear. Numbeo describes the data as follows: “Cost of Living Index (Excl. Rent) is a relative indicator of consumer goods prices, including groceries, restaurants, transportation and utilities. Cost of Living Index doesn’t include accommodation expenses such as rent or mortgage. If a city has a Cost of Living Index of 120, it means Numbeo estimates it is 20% more expensive than New York (excluding rent).” The index was converted to percentages relative to the United States.

Data on the quality of life were collected from WorldData.info. Data were accessed on July 30, 2019, and reflect data for 2019 or the most recent year available. WorldData.info describes the data as follows: “In order to arrive at an overall index for each country, the key figures for the 7 sub-sectors were included in an overall index in different proportions: Stability: 14%, Civil rights: 16%, Health and medical services: 16%, Security: 16%, Climate: 14%, Costs: 16%, and Popularity: 8%.” “Data from the following organisations were used to produce the quality of life indicators: The World Bank Group, CIA Factbook, OECD, Numbeo, Transparency.org, UNHCR, Global Terrorism Database, German Weather Service and own research.” The index was converted to percentages relative to the United States.

Data on housing affordability were collected from the Organisation for Economic Co-operation and Development Price Level Indices. Data were accessed on July 30, 2019, and reflect the change in housing prices and affordability from 2015 to 2018. The Organisation for Economic Co-operation and Development (OECD) describes nominal house prices as “the sale of newly-built and existing dwellings, following the recommendations from RPPI (Residential Property Prices Indices) manual.” Housing affordability is described as “the price to income ratio is the nominal house price divided by the nominal disposable income per head and can be considered as a measure of affordability.” The base year of the data is 2015.

No statistical testing was performed, and the claims found above are based on means alone. As such, this content is exploratory. The most recent year of data was used when possible. Data were unavailable for all countries. In instances where two measures were compared, the analysis was limited to countries where data were present for both.

Costs and purchasing power may vary internationally, but interesting information is valued around the world. For this reason, we invite you to share our images and findings with whomever you see fit. If you do so, however, we do have two requests. First, please use our content only for noncommercial purposes, such as journalism or informal sharing among friends. Second, link back to this page when you highlight our work, allowing others to explore the full project.

7 Founding Sheikhs of the UAE and their achievements

Things to do at City Walk Dubai