27 Apartments for rent in Manchester Tower

The Manchester Tower is a residential building in Dubai Marina. It is a project of Manchester Real Estate Group and its architectural consultant was National Engineering Bureau. The building’s construction began in the year 2004 and was completed in April 2007. This residential building stands tall at 127 meters and has 30 storeys above ground. The tower consists of 336 apartments that include studios as well as 1, 2 and 3-bedroom flats. 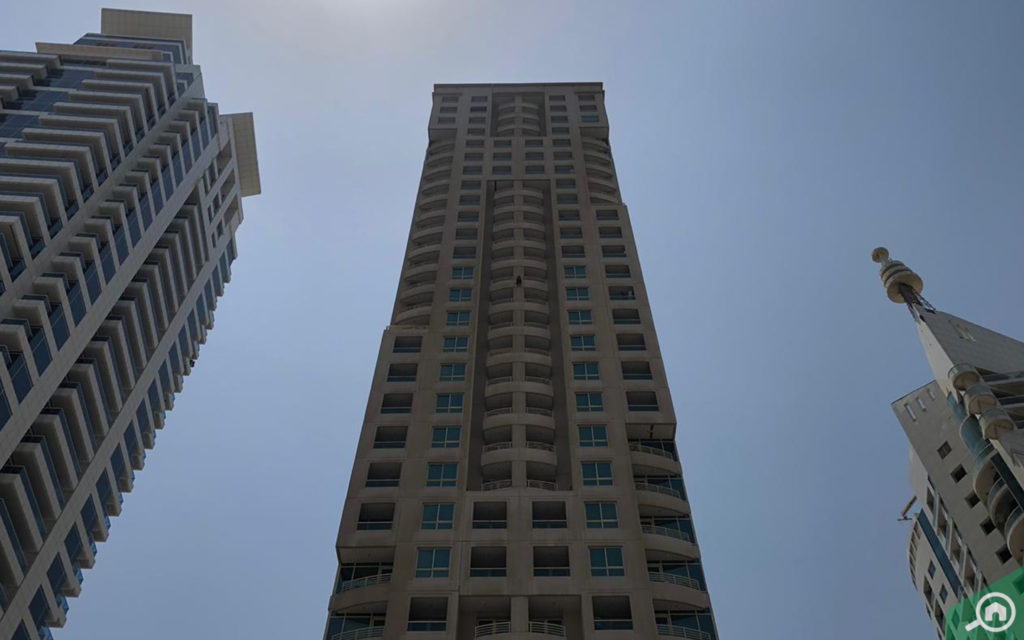 Dubai Marina is an upscale waterfront community that has luxury apartments and offers some of the highest standards of living in the UAE. Close by, residents will have access to some of the trendiest bars and clubs in the area.

Residents are provided dedicated parking spots in Manchester Tower, Marina. However, guests will have to park on the street as there are no covered parking areas for visitors.

There are elevators in Manchester Tower, Marina that make movement easier.

The apartment building is fully maintained and has waste disposal services. Moreover, there is an on-site security staff for protection from any potential threats. Water and electricity are provided by DEWA.

The building has a lobby, a cafeteria and a dedicated barbecue area.

Manchester Tower, Marina has a daycare centre and a kid’s play area. Other than this, there are several parks, spas and sports in the surrounding.

There is a 24-hour concierge service at Manchester Tower in Dubai Marina.

Dubai Marina is a pet-friendly community. However, tenants should ask for permission from the landlord before bringing a pet to Manchester Tower.

Manchester Tower in Dubai Marina has several safety measures in place for its residents:

The units are equipped with fire alarms that can detect smoke and alert tenants on time in case of fire accidents. Intercom network in the building ensures quick communication in emergency situations.

Manchester Tower in Marina has 336 apartments that consists of studios and 1, 2 and 3 bedroom units.

Studio apartments in Manchester Tower Dubai Marina comes in four configurations. The covered area in a studio flat around 340 sq. ft to 355 sq. ft. This unit type comes fully-furnished and is ready to move in. It also has a balcony that offers a stunning view of the entire community.

Similarly, 1-bed flats in Manchester Tower comes in four different configurations with similar facilities. The covered area ranges between 517 sq. ft. to 800 sq. ft. This apartment type comes with a bedroom, a kitchen, a living area, a bathroom and a balcony that offers views of the community. All the rooms are fitted with wardrobes and the kitchen is fully equipped with modern amenities.

On the other hand, 2-bed apartments in Manchester Tower comes in three configurations: Type A, Type B and Type C. A 2-bed residential unit in Manchester Tower comes with an average covered area of 1,100 sq. ft. These units will feature 2 bedrooms, a kitchen, a lounge, 2 or more bathrooms and a balcony which will offer a diverse view of the community including the mosque and the creek.

The largest residential unit found in Manchester Tower is a 3-bed flat that comes in two configurations. For this unit type, the minimum living space will be around 1,391 sq. ft. These units consist of three bedrooms, three bathrooms and a balcony that offers a full view of Dubai Marina’s skyline.

- 1-bed units for rent in Manchester Tower will have a rental price between AED 47k and AED 75k per year.

- 3-bed flats for rent at Manchester Tower Dubai has a rent in the range between AED 105k and AED 110k.

Typically, rent payments are made quarterly through post-dated checks. Some agents may charge up to 5% agency fees and 5% as a security deposit. However, not all agencies will have the same policies, some will be flexible with payment options while others will not.

Residents owning vehicles can get to the Al Seba Street and merge onto the Sheikh Zayed Street via King Salman bin Abdul Aziz Al Saud St (D94) which will take them on Sheikh Zayed Rd (E11).

Jumeirah Beach Residence Bus Stop is just approximately a 5-minute drive away. Other nearby bus stops include JLT, Business Center Bus Stop and Ibn Battuta Bus Stop, both of which are located at a distance of 7 minutes from the building.

Jabal Ali Metro Station is the nearest option for residents of Manchester Tower. It is approximately a 3-minute drive away from the building. Another option is DMCC Metro Station, which is 6-minutes of drive away.

The Manchester Tower is close to the Jumeirah Lake Towers Tram Station and Dubai Marina Mall Tram Station. These stations are at a drive of 8 minutes depending on traffic.

This building is located near some of the best restaurants in Dubai Marina. These include:

One can find several restaurants near Manchester Tower. Ricky’s Restaurant is a popular choice among people residing in Dubai Marina. It offers a variety of European and Indian cuisines cooked to perfection. The restaurant is at an 11-minute walk from the tower. Another eatery that is 3-minutes away via car is Al Maeda Restaurant, situated in the Hilton Hotel. This is an upscale restaurant serving Arabic cuisine. There is an outdoor seating area that offers a spectacular view of the ocean. For Chinese and Thai food, Zen Restaurant at a distance of 8 minutes is worth mentioning.

There are many fine-dining restaurants near Manchester Tower. The Cavendish is reachable within 9 minutes of drive. It has a luxury environment and a diverse menu to offer. Rhodes W1 is also a renowned fine-dining eatery serves dishes inspired by the British cuisine. It has a pleasant ambience and a diversity of flavourful dishes. Celebrities in One & Only Resort Dubai is a fine-dinning restaurant founded by Chef Mauro Colagreco. It serves mouthwatering European cuisine and is 11 minutes of drive from Manchester Tower.

Supermarkets in Dubai Marina that are located close to the building include:

There are several supermarkets in Dubai Marina. Almaya Supermarket is the closest option for residents of Manchester Tower — just a minute walk from the building. It’s a small supermarket that is open 24/7 and has most items. However, if you are looking for discounted deals with much more variety than Choithrams Marina is the place to go. It is at a 3-minute walk from the building. Choithrams has its own bakery where one can buy freshly baked food. It also has a section called ‘Foods of the world’ that offers snacks from different countries including Japan, South Korea, Thailand and the Philippines. Other options include Fresh Deals Supermarket at a 7-minute drive.

Schools and Nurseries near Manchester Tower

Located just an 8 minutes drive away from the building, The Sheffield Private School Nahda campus offers UK-based curriculum. The school also has extra-curricular activities included in the educational programs. Those looking for American curriculum can go for Al Durrah International School located just a 9 minutes drive away. The school caters to kindergarteners to 12 graders. The Central School at a 15 minutes distance is another good option for parents living in Manchester Tower. The school offers an Indian curriculum.

Escan Tower and Yacht Bay Tower are neighbouring apartment towers of Manchester Tower, Dubai. They are just 1 and 2 minutes drive from the building, respectively.

- At the Top — Burj Khalifa

Bluewaters by Meraas is a popular one-stop tourist destination with five-star restaurants, popular shopping outlets, and a beach with wonderful views of gigantic waves of the roaring sea. The destination is home to Ain Dubai, set to be the tallest Ferris wheel of the world.

Dubai Marina Walk is a 10-minute drive from the tower. It is a 7-km long beachfront walkway where visitors can enjoy long, solo walks, jogging, cycling, shopping and dining. 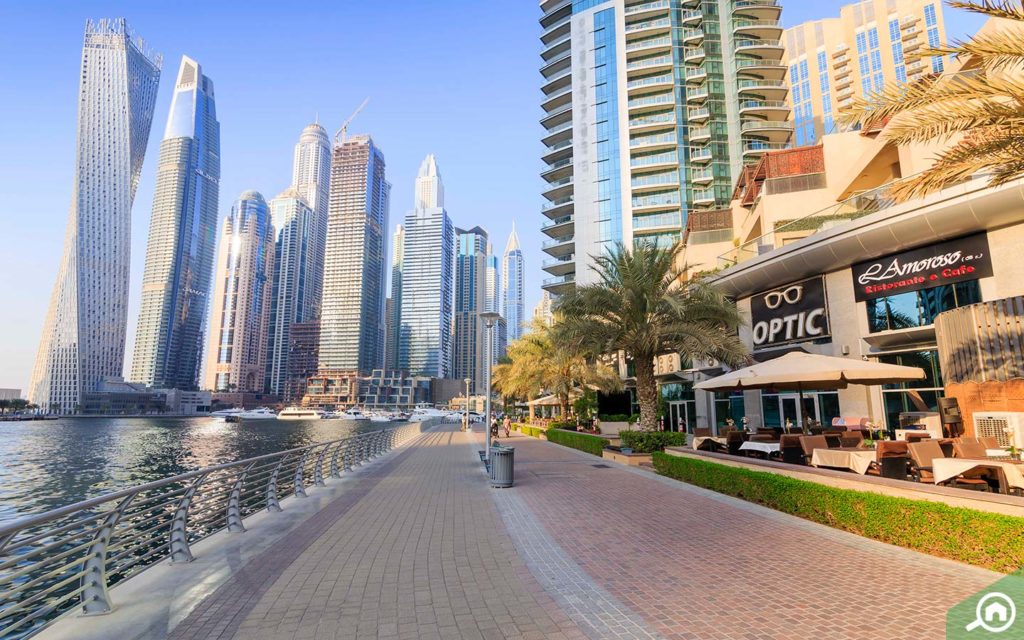 At the Top, Burj Khalifa is an observation deck situated at the top of the world’s tallest building, reachable in a 17-minute drive.

Compared to other residential buildings in the neighbourhood, Manchester Tower has fewer amenities. However, it has the lowest rental prices in the Dubai Marina community. Also, the building gets to enjoy all the communal amenities in Dubai Marina.

WHAT TYPE OF APARTMENTS ARE THERE IN MANCHESTER TOWER?

There are studios, 1-bed, 2-bed and 3-bed units in the building.

WHERE IS MANCHESTER TOWER LOCATED IN DUBAI?