Abu Dhabi is an important hub of business, industries and manufacturing in the MENA region and sees an influx of talent from across the world all year around. The continuous rise in the expat population has provided a steady demand for housing units, especially apartments, in the UAE capital. So if you happen to be one of the many on the lookout for apartments, consider our guide to the popular apartment renting areas of the capital and find out the attributes that make them so. 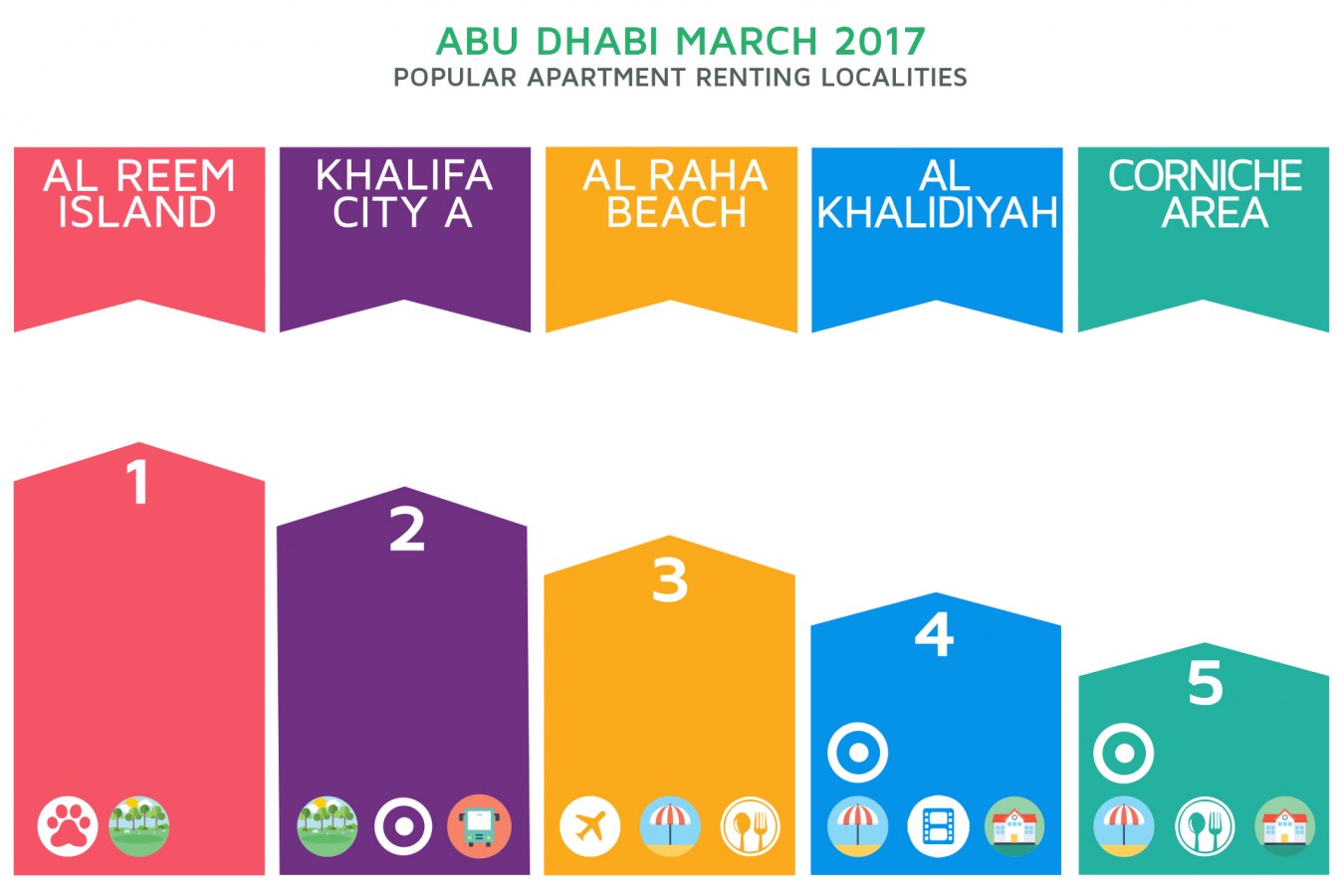 During March 2017, Al Reem Island received the most number of inquiries for rental apartments, making it the locality most appealing to prospective tenants.

Al Reem is very popular with expats due to its superior infrastructure and well-planned residential communities. It also has wonderful waterfront views, remarkable architecture and high quality of construction. The area is easily accessible through various main thoroughfares and by various modes of transport. Tenants can choose from a variety of studio units, 1-bed apartments, 2-bed apartments and the larger three and four-bed apartments up for rent in Al Reem Island. It is pet-friendly, has a number of parks, walkways and cycling and jogging tracks, and several good restaurants. All in all, it is a great locality that is big on practicality, ease of access and versatility.

One of the older but key residential communities in the emirate, Khalifa City A is at the heart of Abu Dhabi and ideal for living with a family. It has a number of quality schools, parks, malls and hospitals in the vicinity. Besides, it is well connected with other parts of the city. Travelling to and from the area is fairly easy through various bus routes, taxis or by car. It is also very close to the airport, so you are certain to never miss a flight as long as you have a home in Khalifa City A. Apartments in Khalifa City A are well-built and come laced with all amenities needed for a good living.

Al Raha Beach is a suburban locality and one that is becoming increasingly popular with residents. It is located right across Khalifa City A and is close to the international airport as well. Want more? The entertainment destination Yas Island is a stone’s throw away. Moreover, Al Raha Beach has a number of luxury hotels that house quality restaurants and beach fronts in case you feel like pampering yourself over the weekend. Several apartments in Al Raha Beach overlook beautiful beaches along the Arabian Gulf.

Location, quality of construction and accessibility make properties in Al Khalidiyah highly prized. Besides being a thriving residential community, Al Khalidiyah is an important commercial and business hub that is home to important public and private installations. Its residents include old and young, families and singles and both westerners and easterners. Mubarak Bin Mohammad Street borders the area in the north, Al Khaleej Al Arabi Street in the south, Al Falah Street in the east and Corniche Road in the west, making it easily reachable through various sides of the city. It is also home to various good restaurants, delis, fast-food chains and cafes. Bonus point: it’s at walking distance from the fabulous Corniche Beach.

Corniche Area is one of the poshest residential localities in Abu Dhabi. Its location enables apartments in the area to have remarkable views of the Arabian Gulf as well as the city. It is right next to the Corniche Beach as well as the iconic Emirates Palace and Etihad Towers. Superior location and high construction quality make rental apartments in Corniche Area remain in high demand.